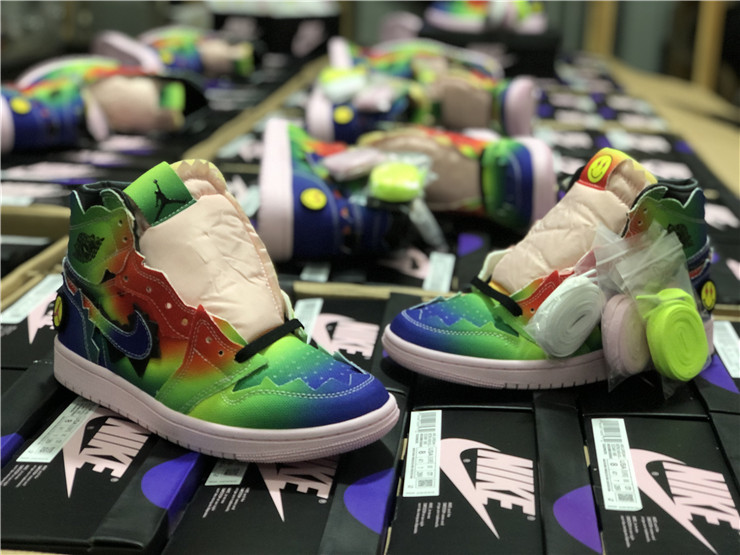 I didn’t understand the magnitude and effect of backdooring sneakers until I saw how folks were so desperate to score a pair of the upcoming Jordan 1 University Blue. I came across the following post on Facebook and couldn’t stop laughing. 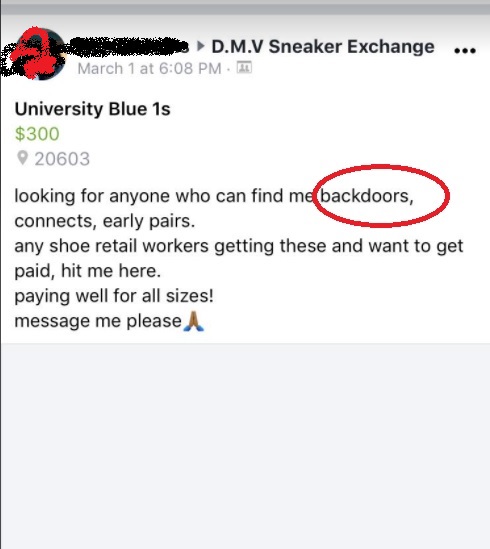 Maybe  I’m living under a rock and  have become so oblivious to the extent to which brick and mortar sneaker stores have been infected with this illicit operation. I’m not surprised by the fact that sales associates and managers alike from retailers have bought into this system though. Backdooring Jordan retros didn’t make national news till a couple of years ago when the Jordan 13 Melo dropped. There was a recall of the shoe because of  cosmetic flaws. Nike realized that several retailers had a substantial amount of pairs missing prior to the release date; managers were getting their hustle on( backdooring and selling them early) but  several of them got exposed and lost their jobs as a result of this crackdown, see post below

But that did little to stop this phenomenon. A couple of weeks ago, I went to store A ( I won’t name the store ) to try to secure a ticket for the Jordan 4 Taupe Haze and was told by a high ranking employee that potential buyers were purposely told that Store A was not getting the shoe. You see how audacious they are. I was instructed to come the next day by 11 AM to possibly score a ticket. I followed the instructions and arrived the following day at 11:05 AM only to be told that all the tickets were accounted for. Prior to that, there was another interesting event that took place. Store A was  getting a restock of a certain shoe from Brand B that is performing well on third party marketplaces ( I won’t name the shoe because I’m still flipping it and most resellers don’t know about it). When I came to pick up a pair of that particular shoe, the manager made the following comment,

we only got 6 pairs, I got 3 for myself and them others took the rest

I chuckled and just said:” aight “. I didn’t just mention this story for nothing, there is a purpose for it. Since I couldn’t get the Taupe Haze 4 from Store A and they realized that they had screwed me over twice, the high ranking employee gave me what he called a peace offering– he went and pulled one of the pairs of the shoes of brand B and handed it to me. I’m basically at the mercy of their mood at the time.

Here is what is going on with most retail managers and sales associates. They split about 60% of the inventory among themselves and the remaining 40% with their acquaintances and regular customers . If you wonder how they aren’t getting busted , it’s easy. All they have to do is have friends or family members buy the shoes on their behalf by securing them guaranteed tickets. I can tell you how we got to this point- the culprits are StockX and Goat. The advent of these new types of marketplaces have leveled the ground, they are equalizers. They have made it so easy to sell sneakers that sneaker retail workers want to get in on the action. With eBay , you had to be knowledgeable about sneakers; moreover listing an item took a lot of time and energy. With StockX, all one needs is a style # and in the blink of an eye, anyone can list and sell several sneakers per day. So If I’m a manager or a sales associate and can gauge the price of a certain shoe on the market while at my job, guess what – I’m getting in on the action, I want a piece of that pie. Retail workers are fed up with resellers and  have turned into resellers themselves,  hence the backdoors. For managers and sales associates who don’t want  to get their hands too dirty( selling it directly themselves ), the better alternative is to build relationships with macro or micro level resellers who give them a kickback of every shoe they sell. If you think backdooring sneakers has only affected the USA, check the image below

It has become and global pandemic, the new normal and customers expect it. Buyers don’t even get mad or offended by it, they’ve accepted and are willing to go with the flow. You can forget about getting limited releases if you aren’t willing to bribe the employees. Bots are dominating  e-commerce while tainted employees are also dominating brick and mortar sneaker stores, so your best option is to aim for other brands or create your own sneakers. Is it wrong that retail employees are doing that? Yes it is, but can I blame them? No I can’t because I would do the same if the roles were reversed. So I don’t even want to be put in a position where I’ll be tempted to Sin, the bible tells me to flee all temptations. So I’d rather not be put in an environment where I would succumb to the enticement of being shady. A bon entendeur, salut.