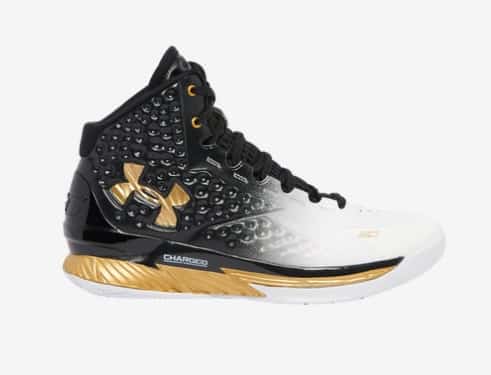 It’s been a few years since the original Curry 1’s were released, but Under Armour has recently brought them back. They may not be selling as well as they did when they first came out, but the Curry 1’s are still a force to reckon with. With the Warriors in this year’s NBA playoffs under the leadership of their own MVP Steph Curry, things might get saucy again for the Curry line. With that said, the brand is bringing back the Under Armour Curry 1 MVP on June the 3rd, 2022.

Brief History of The  MVP Curry’s

In 2015, Steph Curry had a breakout season with the Golden State Warriors, winning the NBA MVP award and leading his team to the NBA Championship. To celebrate his success, Under Armour released the Curry 1 MVP.  The shoe was inspired by Curry’s on-court success and his off-court style. The shoe featured a black and white color scheme with gold accents. It was made of a lightweight, breathable material that is designed to provide support and durability. It also had a unique lace-up system that helps to keep the foot secure while allowing for natural movement. The Curry 1 MVP quickly became one of Under Armour’s best-selling shoes, and it remains popular today.

Have There Been Changes  Made To The shoe?

It seems like Under Armour has taken the saying “if it ain’t broke, don’t fix it” to heart with the  Curry 1 Retro MVP. From the pictures I’ve seen and from their website, it doesn’t look like there have been any changes made to the retro version. This is likely to please fans of the original shoe, which was first released in 2015. So if you’re interested in purchasing a pair, refer to the details below

Where To Buy The Under Armour Curry 1 Retro  MVP

In other sneaker news, the Jordan 6 Oreo releases tomorrow and our June 2022 Sneaker Release calendar is available now