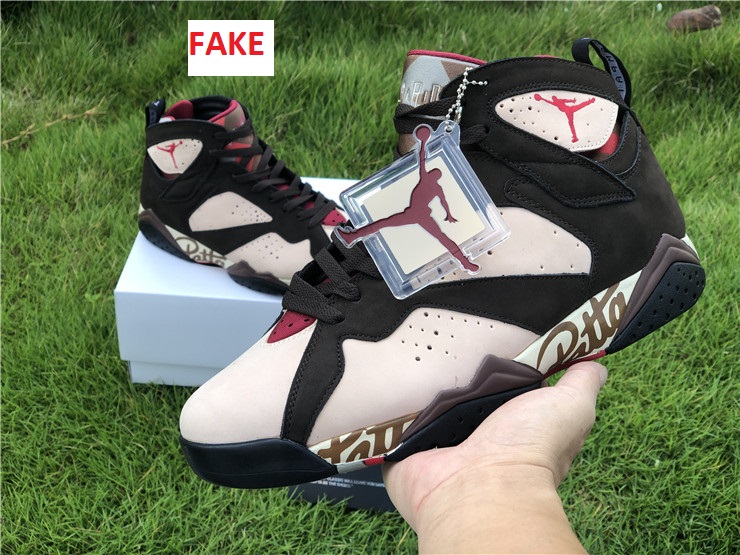 It shouldn’t be a surprise to anyone that the Air Jordan 7 Patta has been targeted by the replica industry. The shoe is limited, I read somewhere that only 4600 pairs were made but I’ll confirm that later on this week when I write my projection post. I came across a set of bootleg pairs and I wanted to quickly give you some tips to identify them; these real vs fake posts aren’t meant to be the standard for identifying illegitimate sneakers, they are only supposed to be used as a preventive tool to avoid being taken advantage of. I take a considerable amount of time to check for possible flaws, this isn’t something that I take lightly. with that said, here are some of the quick ways to bust the Fake Air Jordan 7 Patta. 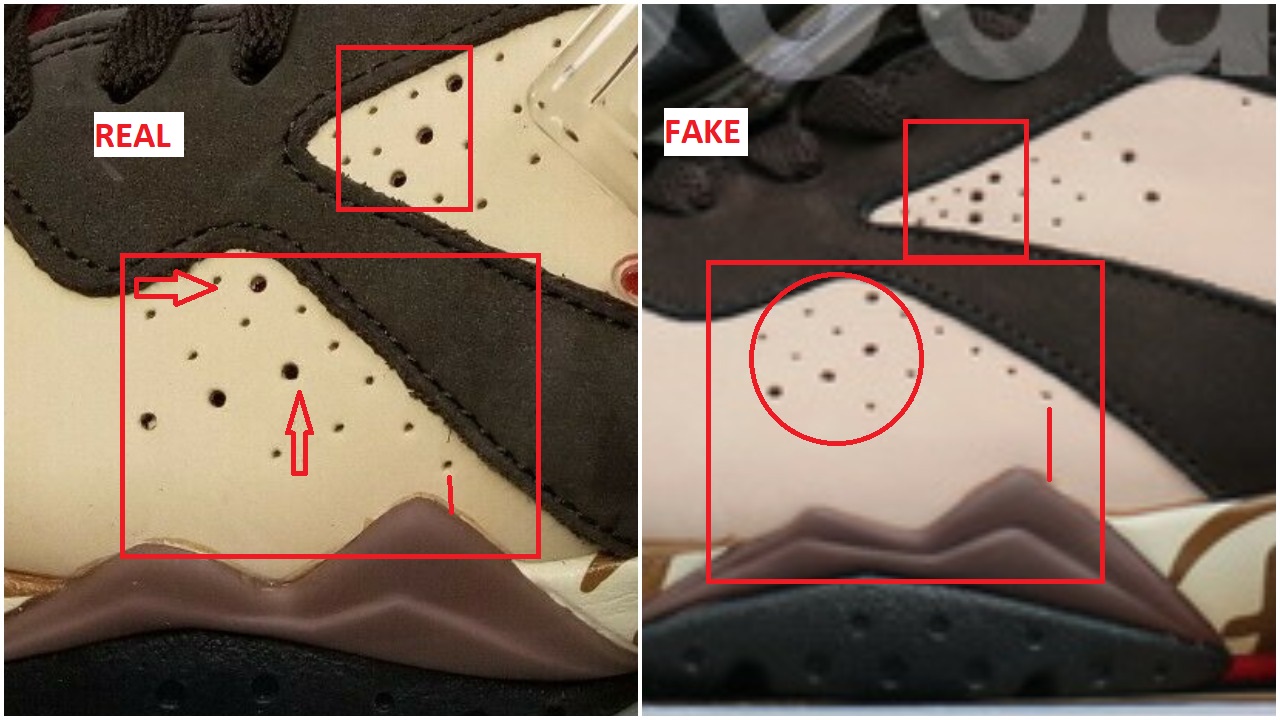 The placement of the holes is totally off on the fake pairs as you can see. The bigger holes located on the side panel aren’t co linear on the replica pair ( see small red square). And if you look at the red arrow  pointing up and the red circle, you’ll notice that the fake pair’s holes are very slanted. The vertical red line also shows you that the gap between the bottom small hole and the edge of the midsole is bigger on the fake pair. 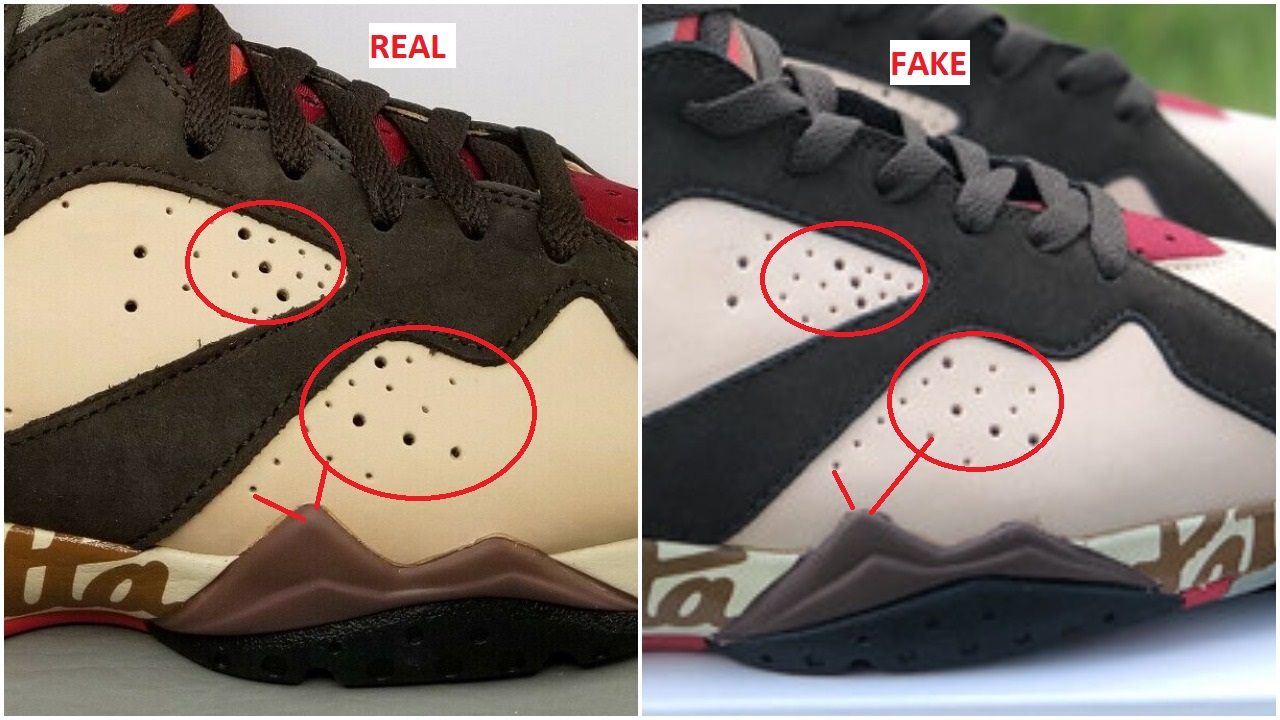 This is an additional picture that shows more differences between the holes on the fake and the authentic pair ( zero in on the red circles and the added secant lines). 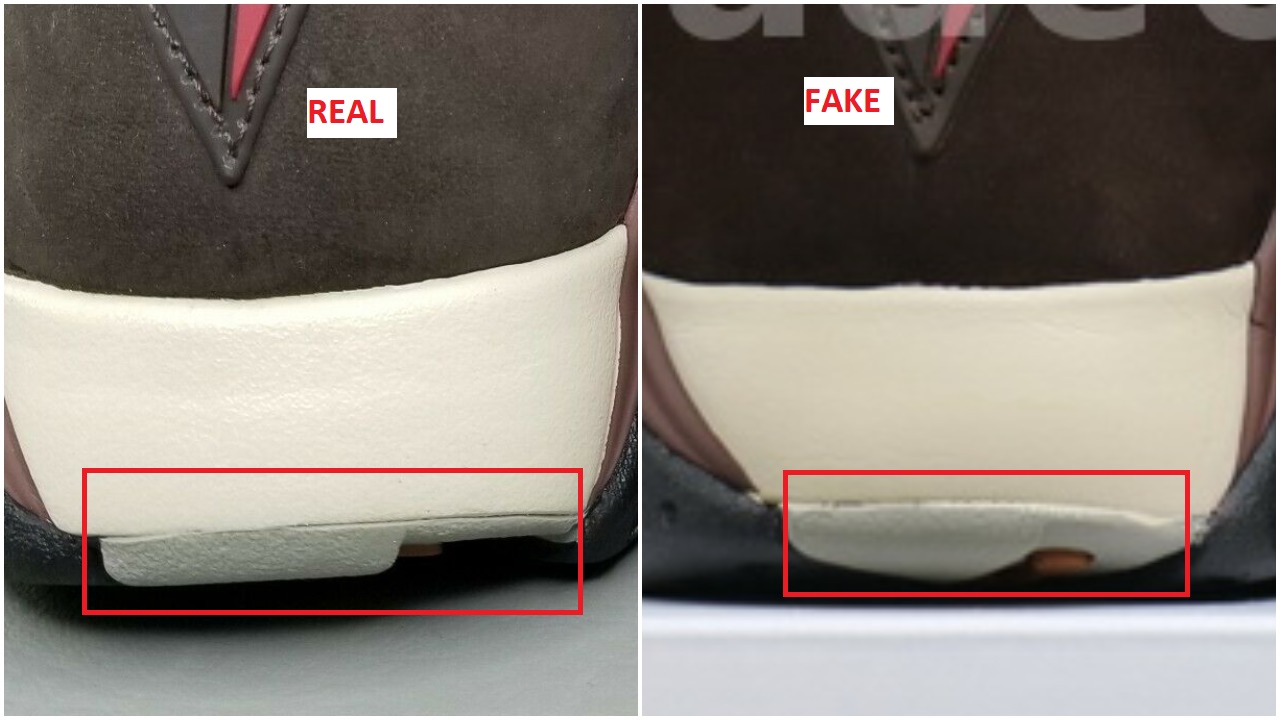 I’m assuming you can easily spot the nuance between both pars here ( I have no words to really illustrate the contrast between the bottom part of the fake and the legitimate pair). 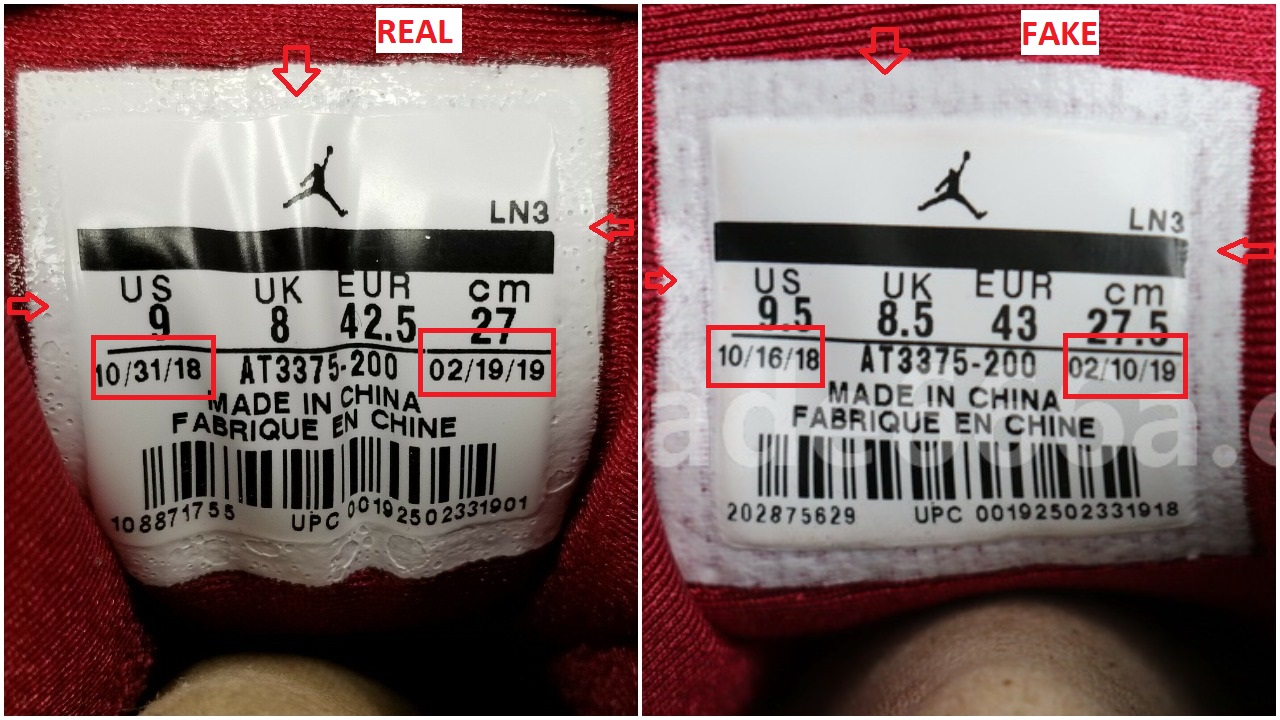 The illegitimate pairs are always produced a lot earlier ( see production date above highlighted by the red rectangles). I also want to stress out the fact that the border of the fake inside tag isn’t consistent ( as far as the color is concerned) with the inner part. Take a look at the authentic pair’s inside label, the difference will jump at you. 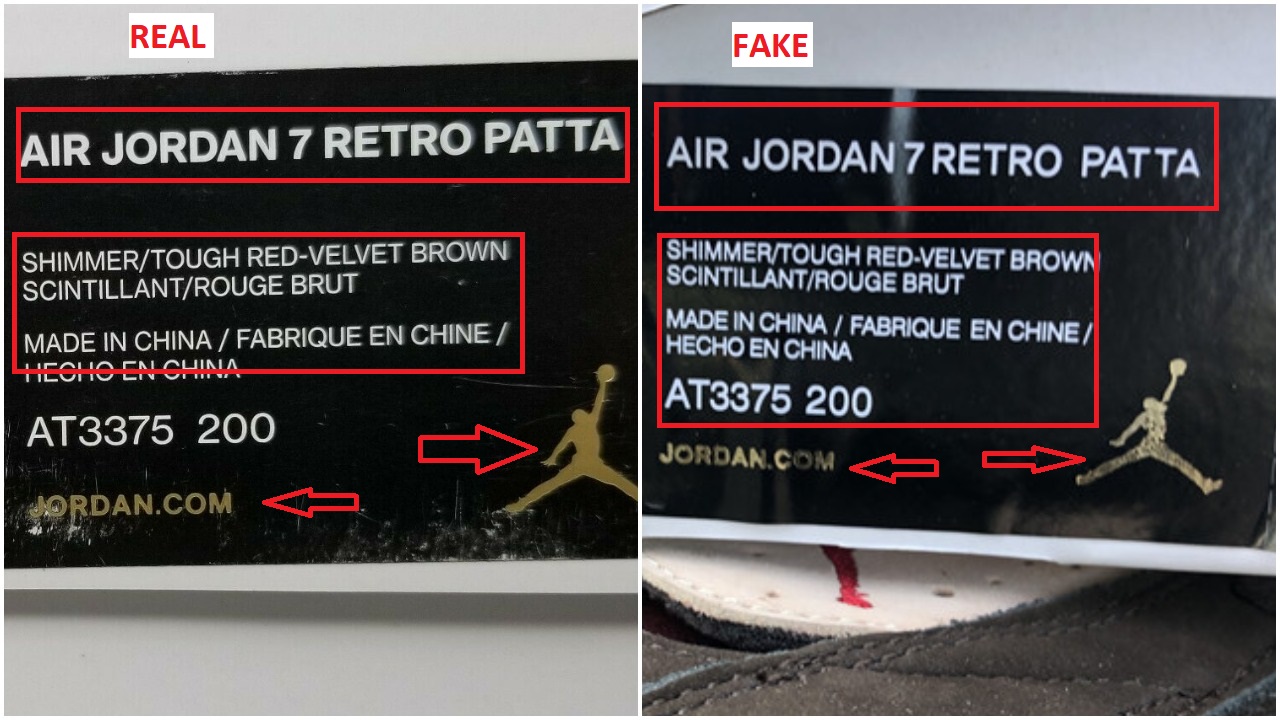 No comments needed here ( check the picture above). 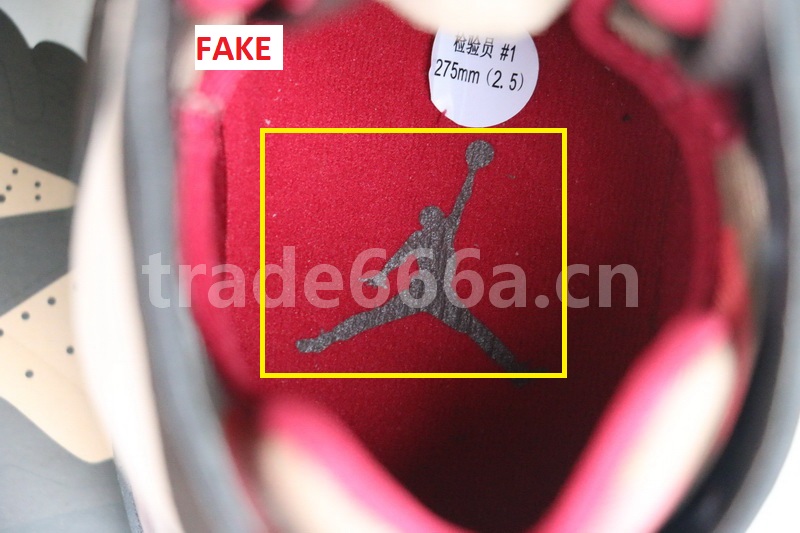 This is the logo on the insole  The ink used is cheap and will come off as soon as the wearer slips his/her foot in the shoe. 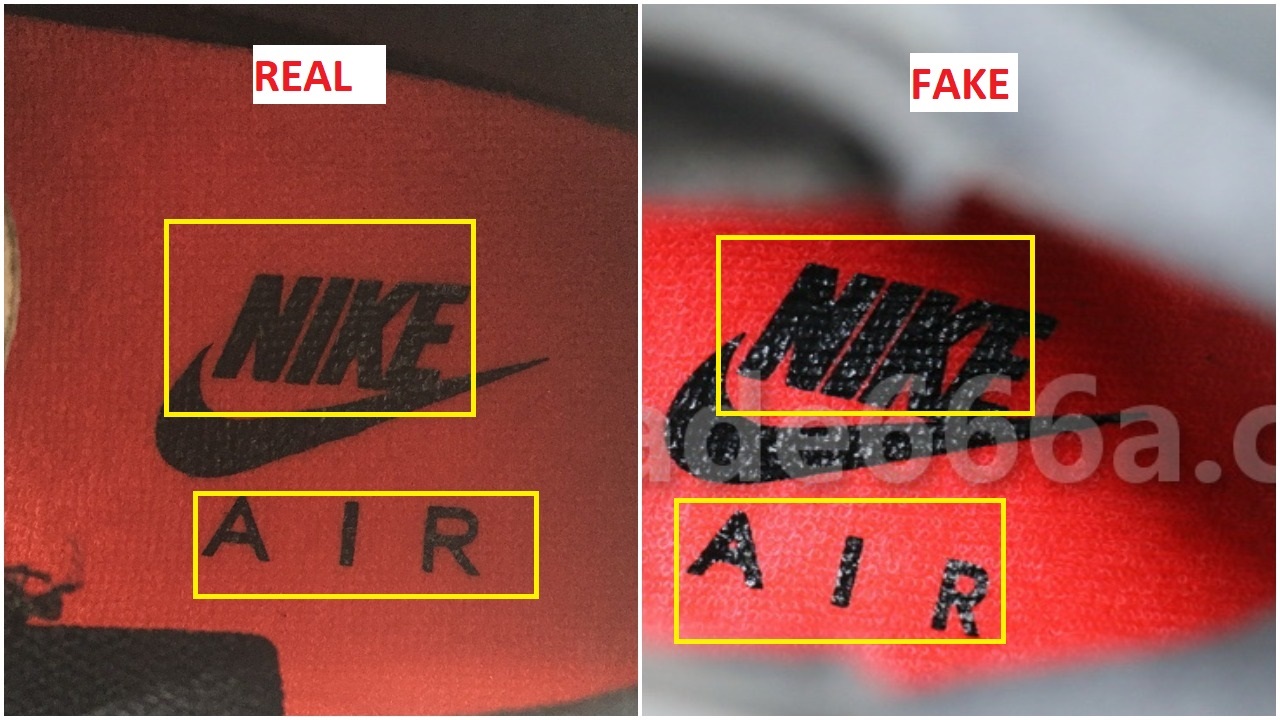 There you have it folks, if I happen to find any other differences , I’ll be sure to update the post.

WHERE TO BUY AUTHENTIC PAIRS??