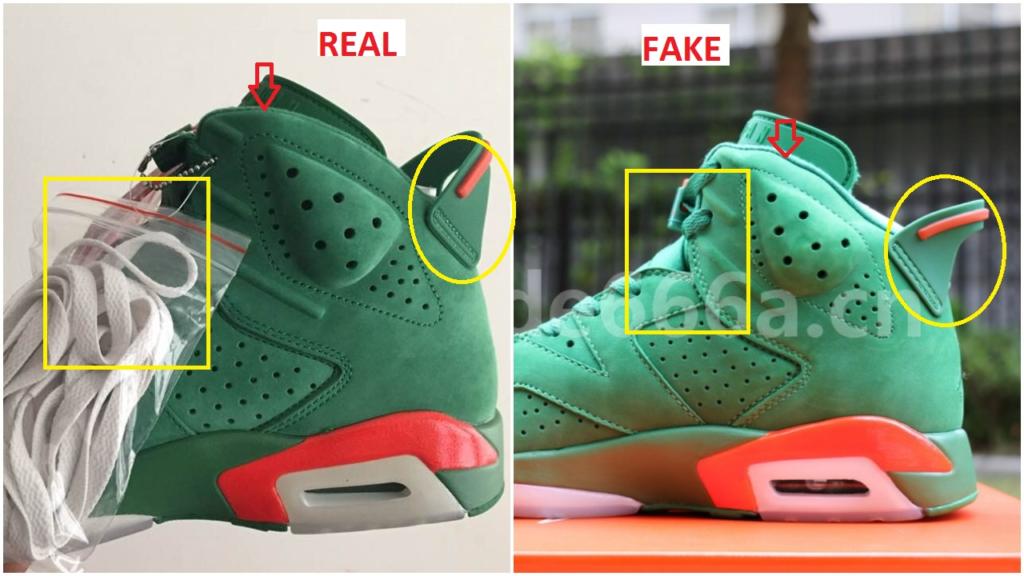 I did a comparison between a real and a fake pair of the Air Jordan 6 NRG Gatorade Green a month ago. Because I didn’t have the actual shoes on hand, it was a bit hard to spot the nuances. I was able to scoop up a couple of pairs on saturday and here is an updated version of the comparison. The real pair is size 10 while the fake one is size 9.5 so there shouldn’t be any variation between them ( they are basically the same size). Here is how to spot the Fake Air Jordan 6 Gatorade green. The heel counter is a bit more curvy on the authentic pair ( see red arrow). And if you look at the heel tab, the entire shape and placement is totally off on the fakes. The placement of the holes on the side pods isn’t the same between both pairs ( and the authentic pair appears to have bigger holes). Also check out the red arrow pointing down , it shows you the poor craftsmanship on the fakes ( the heel liner is crooked). Once again, the placement of the holes on the panels is completely off, the Fake Air Jordan 6 Gatorade Green  pair has holes that are basically adjacent to the edges of the panel underlay near the bottom and the right side. Not that it matters that much but it’s worth noticing that the real pair has an extra set of white laces ( that’s an easy fix though). Once again check out the differences on the heel tab and the heel liner. Another thing worth mentioning, the fakes I came across didn’t include the Gatorade towel ( but that’s another easy fix).

There you have it folks, if you’re looking for legitimate pairs , refer to the listings and links below from our featured sellers,