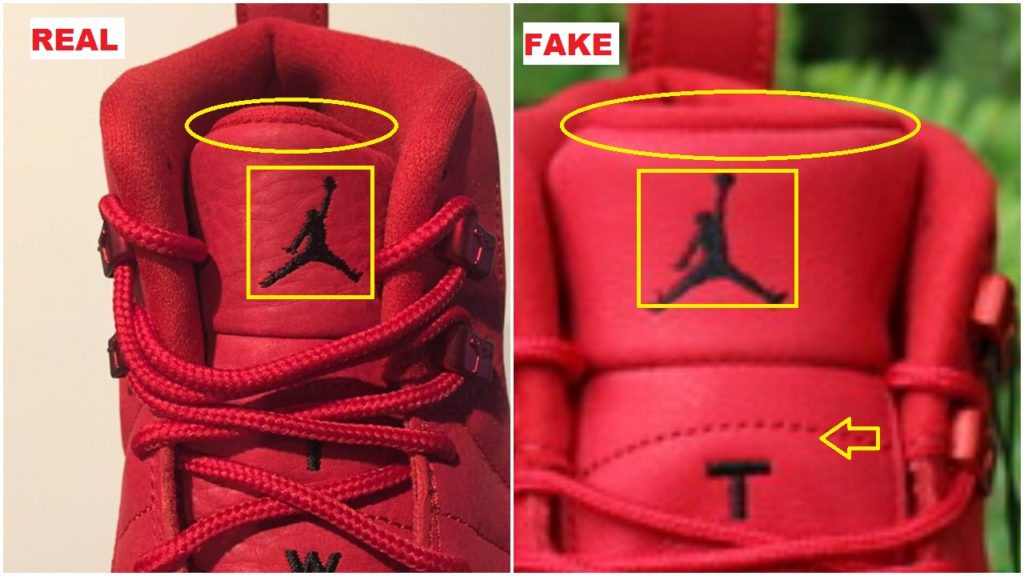 The replica pairs of the Jordan 12 gym red have been out for months but I was waiting to get my hands on an authentic pair to do a comparison. I picked up a pair on Saturday and proceeded to take enough pictures for a side by side comparison. The pair I picked up was a size 10.5 so I relied on other images I took from authentic sellers via eBay to pin against the fake pair which was a size 8. 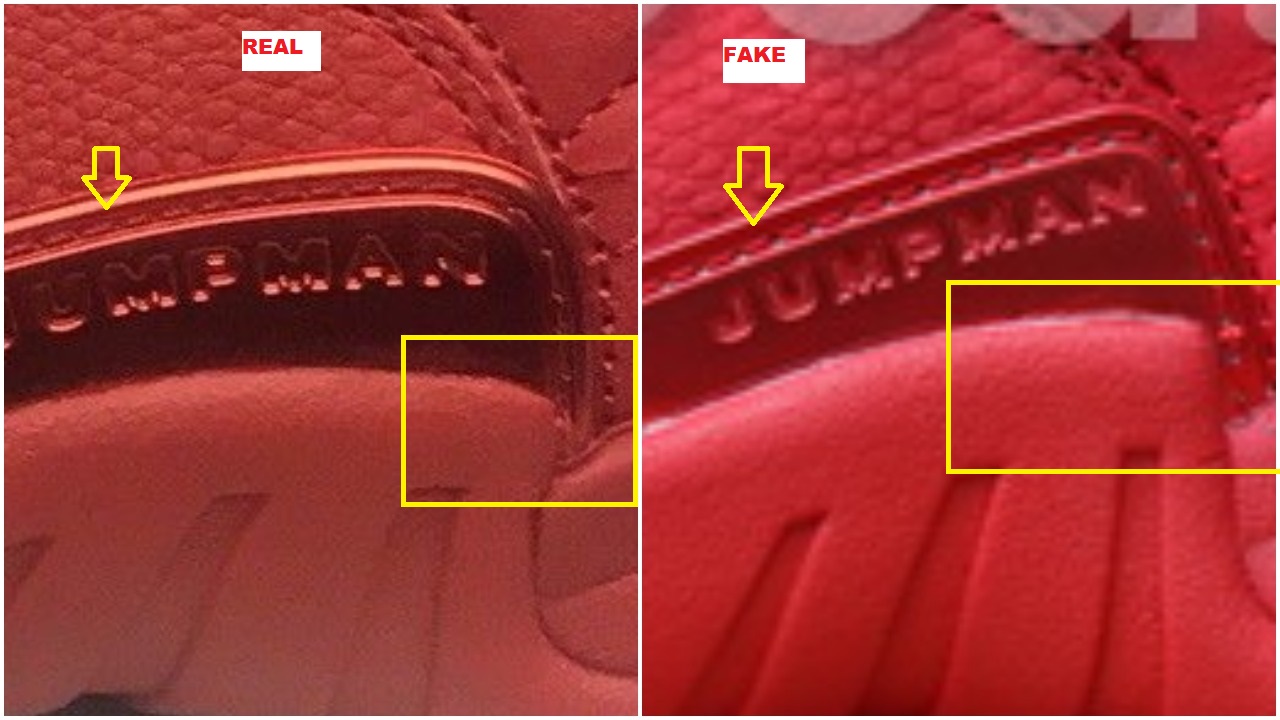 This is a recurring problem with replica pairs of the 12’s, if you zero in on the yellow squared area, you’ll notice that the end of the tab extends further down on the authentic pair and is cut short on the fakes. The tab is also more shiny and glossy on the real pair than it is on the fakes. 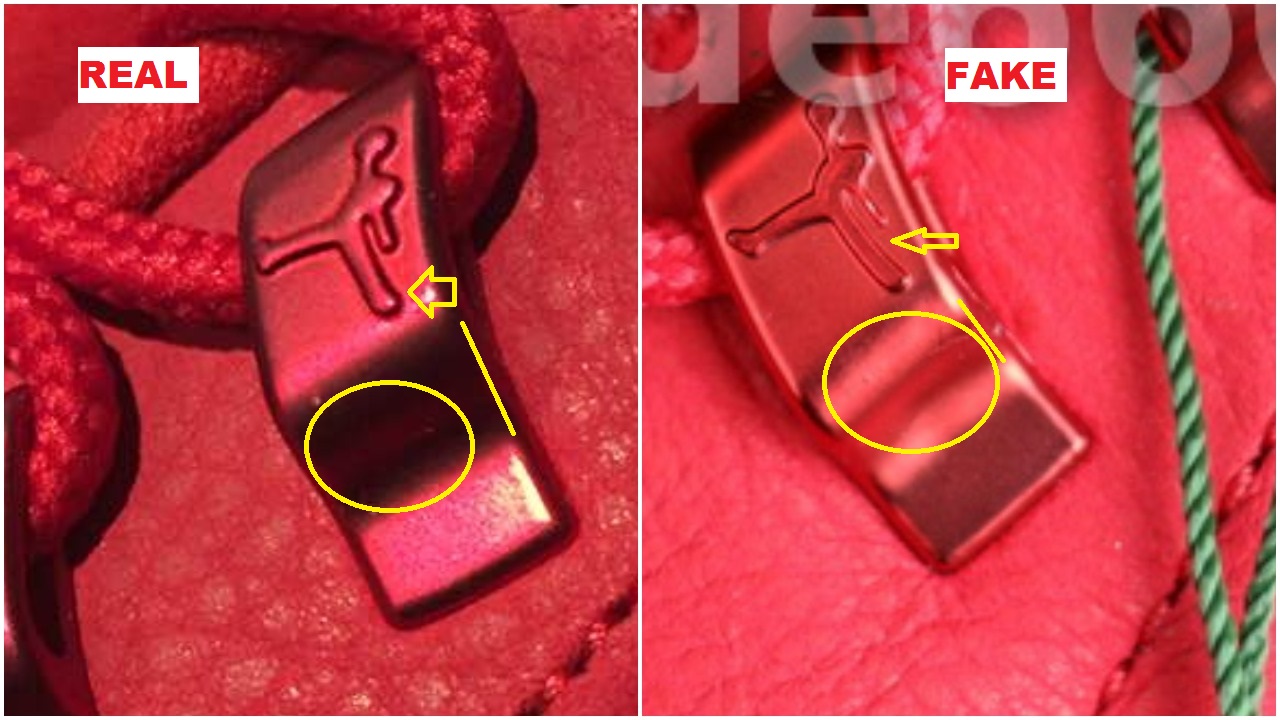 You can clearly that the differences highlighted by the circle ( extra ridges on the fakes, smaller gap on the fakes). And if you look at the leg of the jumpman ( see yellow arrow) it appears to be elongated on the fakes. 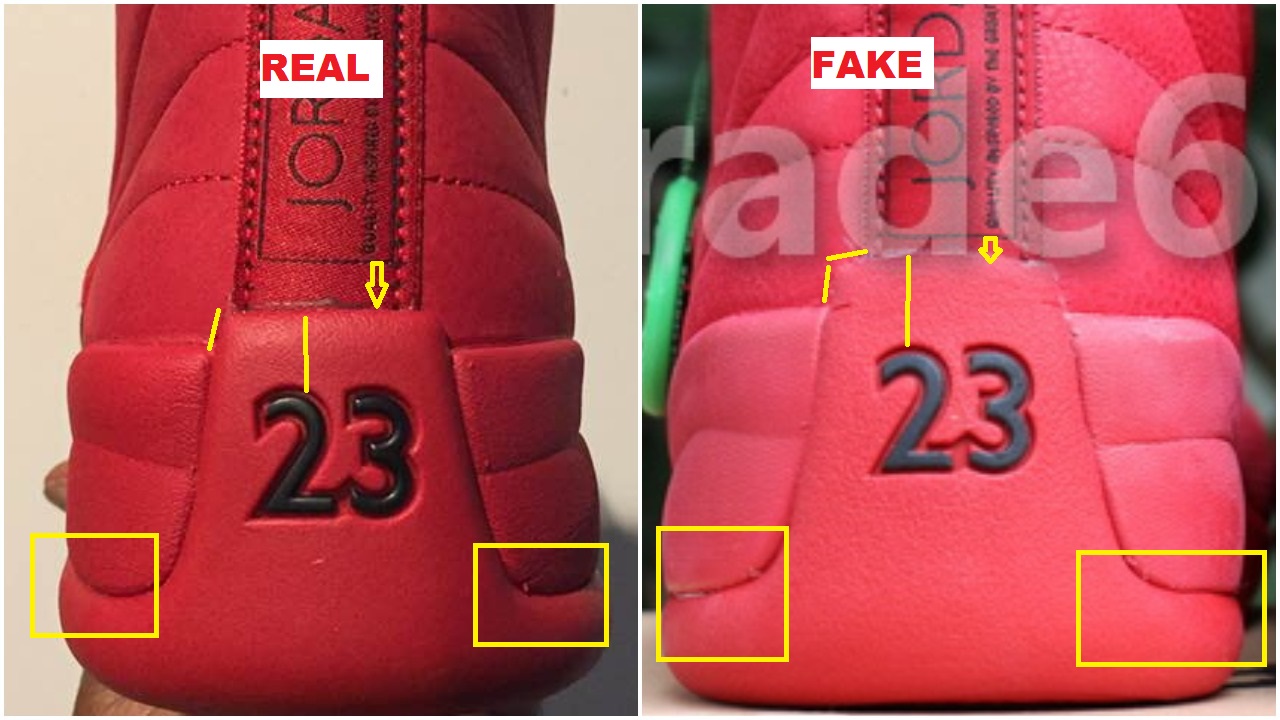 The #23 is placed a little too high on the fake pair ( it’s supposed to be at the center ). The edge of the midsole is curvy in the shape of a parabola on the authentic pair but the same edge looks like half the side of a parabola on the fakes ( see yellow squares). The spacing between the “branding” and the edge of the midsole is bigger on the real pair ( see yellow arrow pointing down). 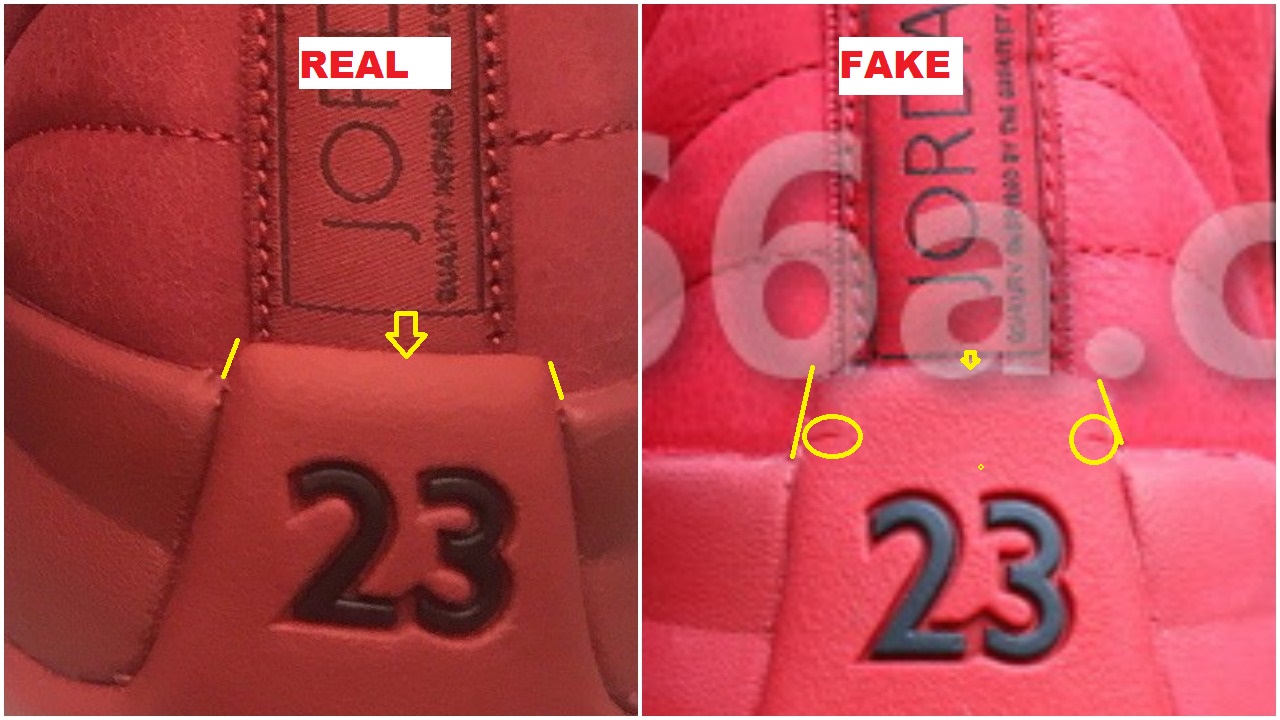 This is a another picture that highlights more nuances ( you can see the yellow circles showing you the cracks on the fake pair). 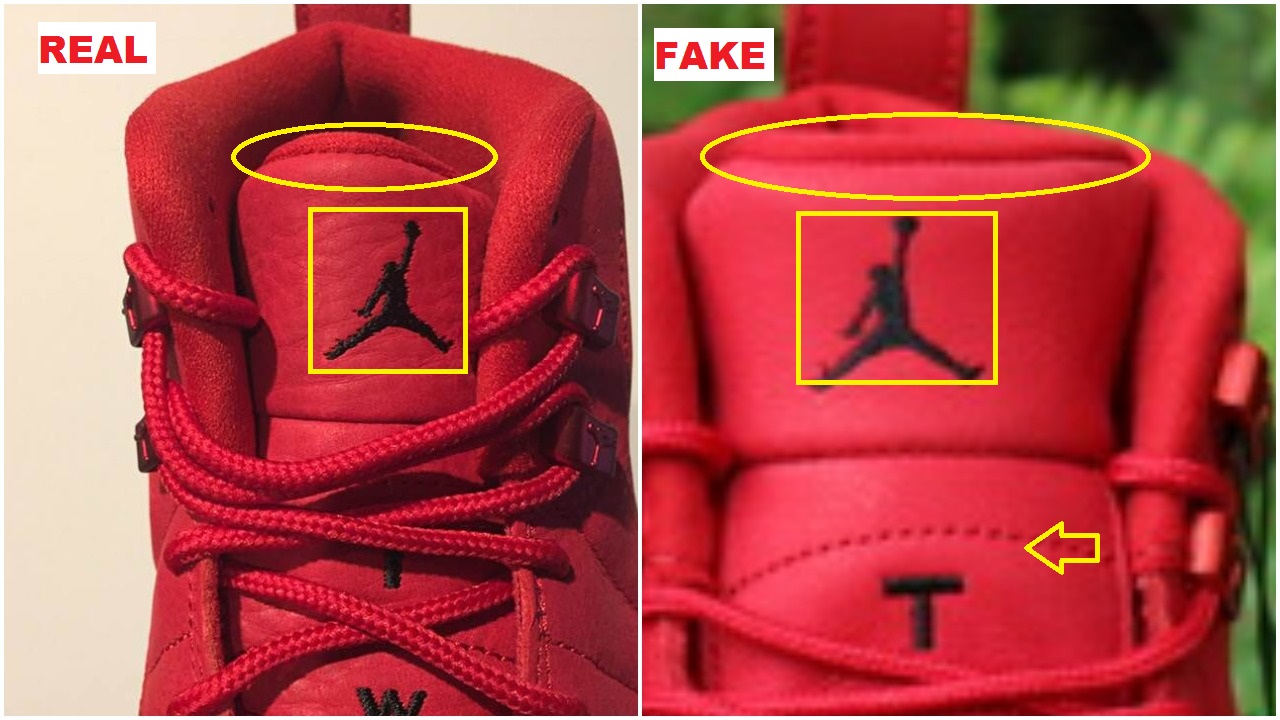 The tongue appears flat near at the top on the fake pair, it is also short and the jumpmen do not look the same. The entire shape of the tongue of the fake pair looks really awful and bumpy. 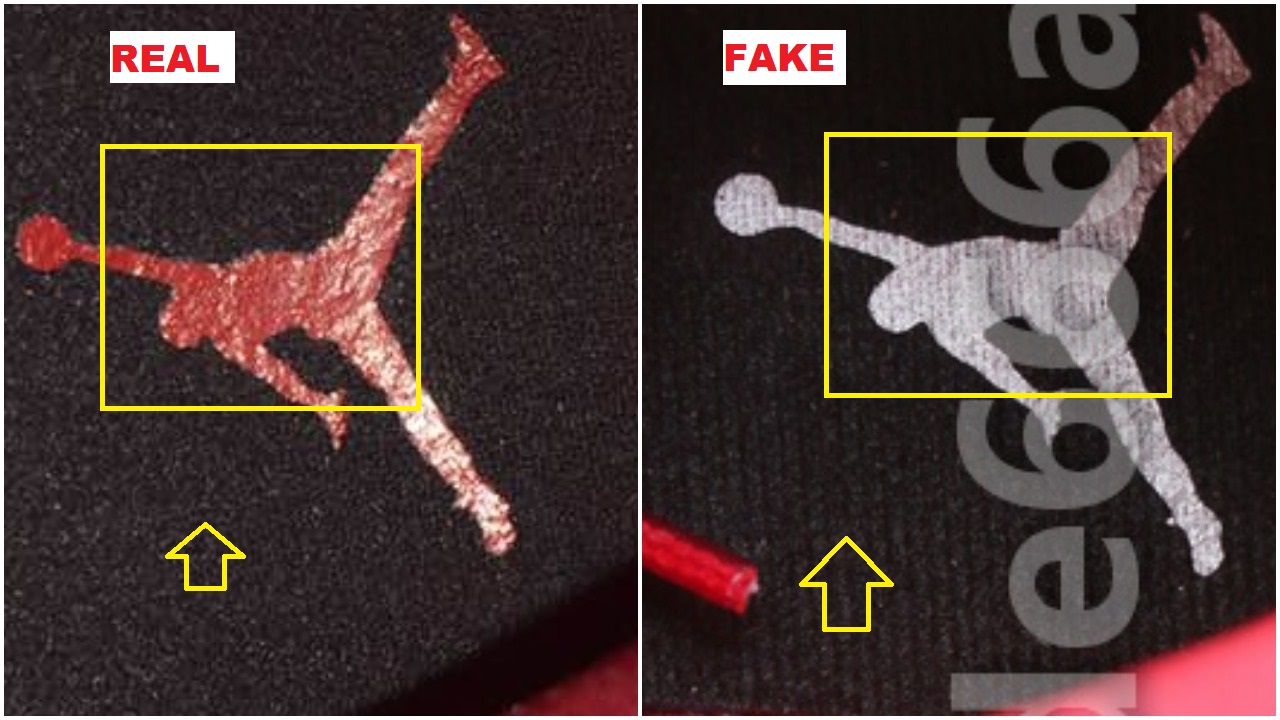 The jumpman logo is red on the authentic pair and white on the fake ( that will be an easy fix though on the next updated pair). The sockliner also appears to have vivid lines on the fake pair ( see yellow arrow). 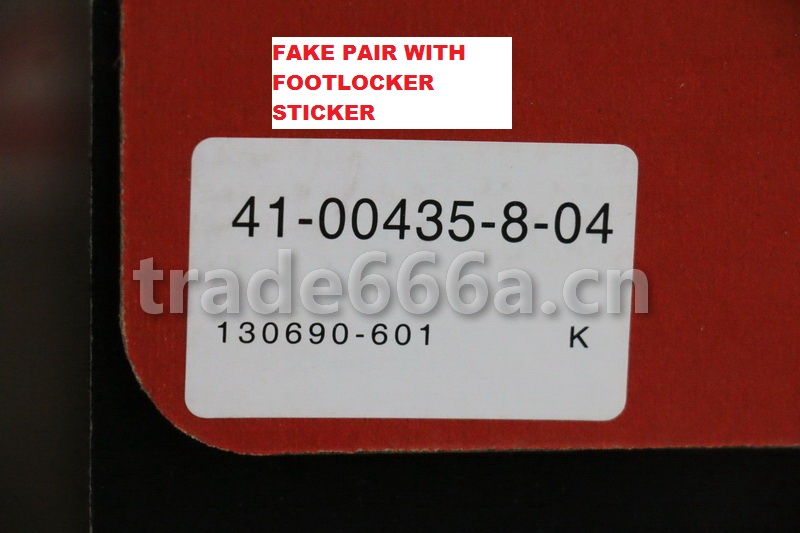 This is where one has to be scared, the fake box features a footlocker sticker. The pair that I picked up from my local footlocker store didn’t have that so use caution.

There you have it folks, if there are updates to the fake pair I’ll be sure to update the pictures.