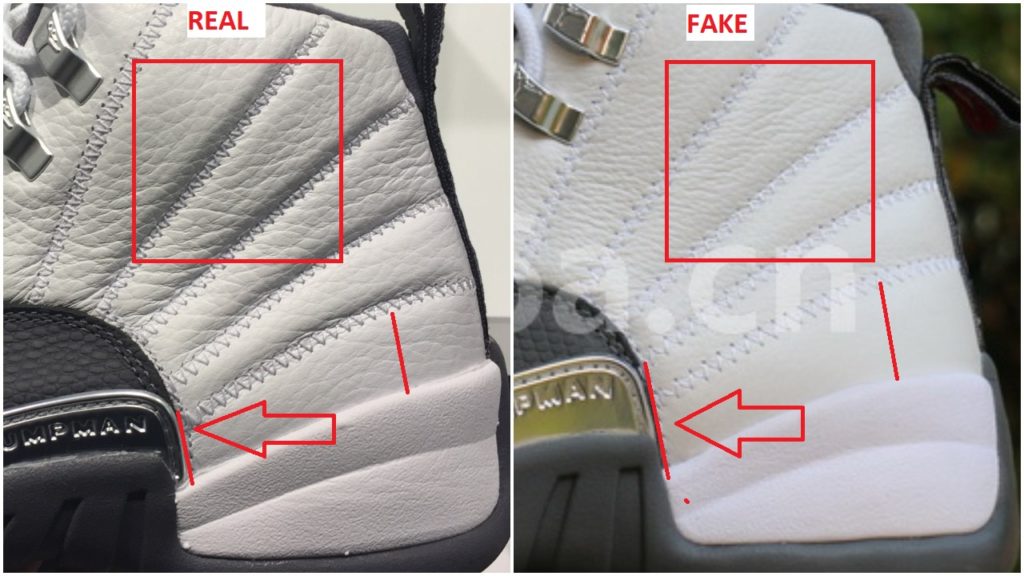 The Air Jordan 12 Dark Grey released officially on December the 2nd in massive numbers. But that hasn’t prevented bootleggers to create their own replicas. I finally had an opportunity to visit my local mall yesterday and took several pictures of an authentic pair of the Jordan 12 Dark Grey ( in size 9) so I can do a side by side comparison with the fake one  ( in size 9 as well). Here are quick tips to identify the fake air jordan 12 dark grey. 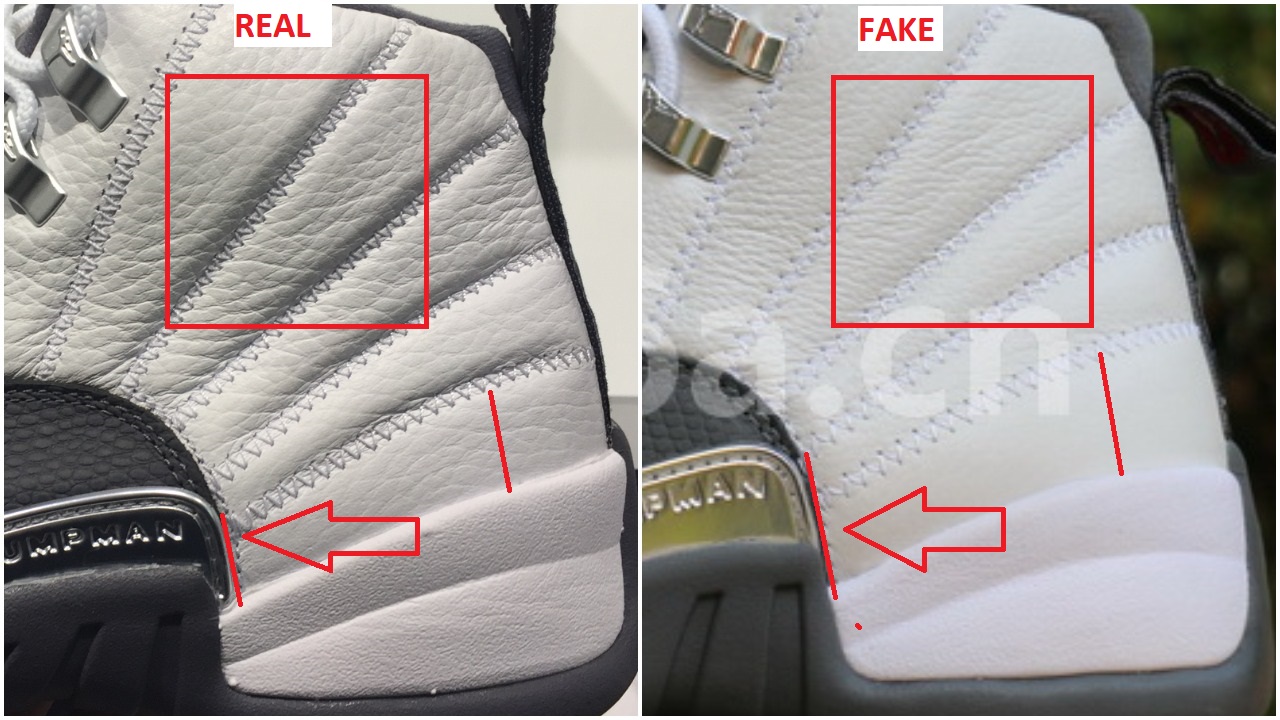 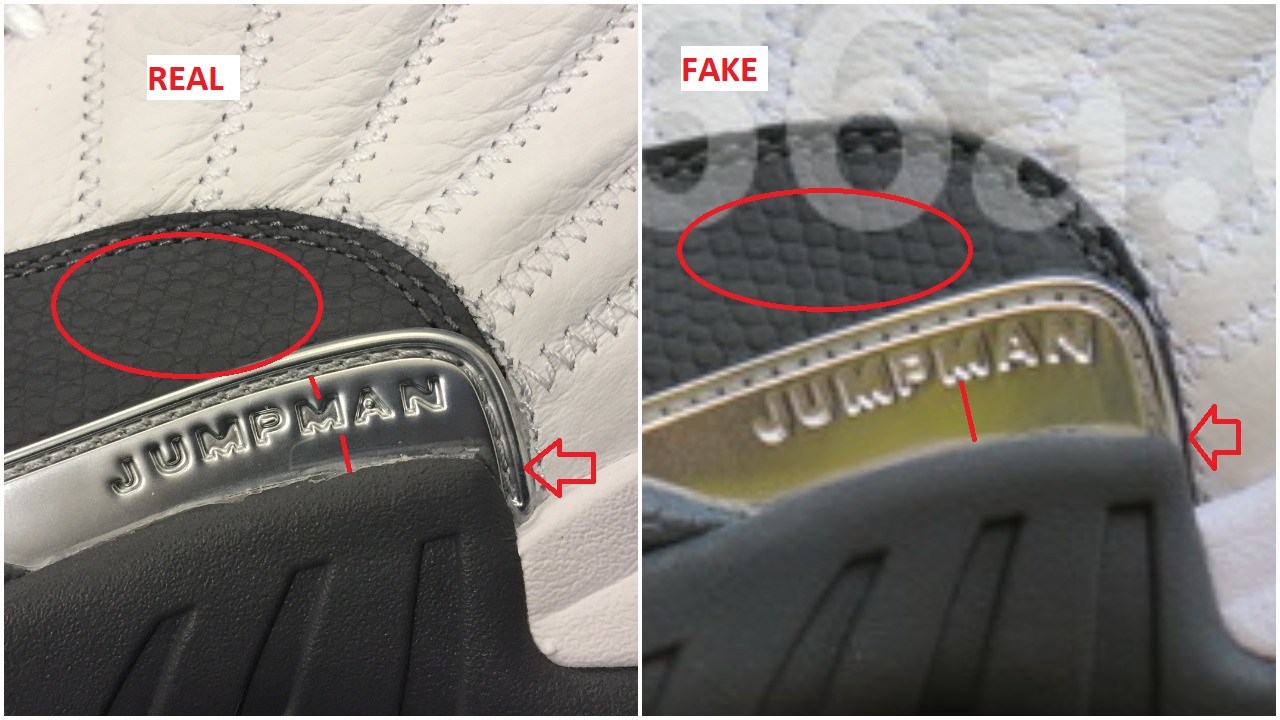 The jumpman logo is placed in the middle of the silver tab on the real pair, but adjacent to the upper part of the edge of the tab on the fake one. The tab extends further down and touches the heel portion of  midsole on the authentic pair ( see red arrow). But on the fake pair the tab is cut short. The bumps on the mudguard are subtle and stretched on the real pair ( see red circle). 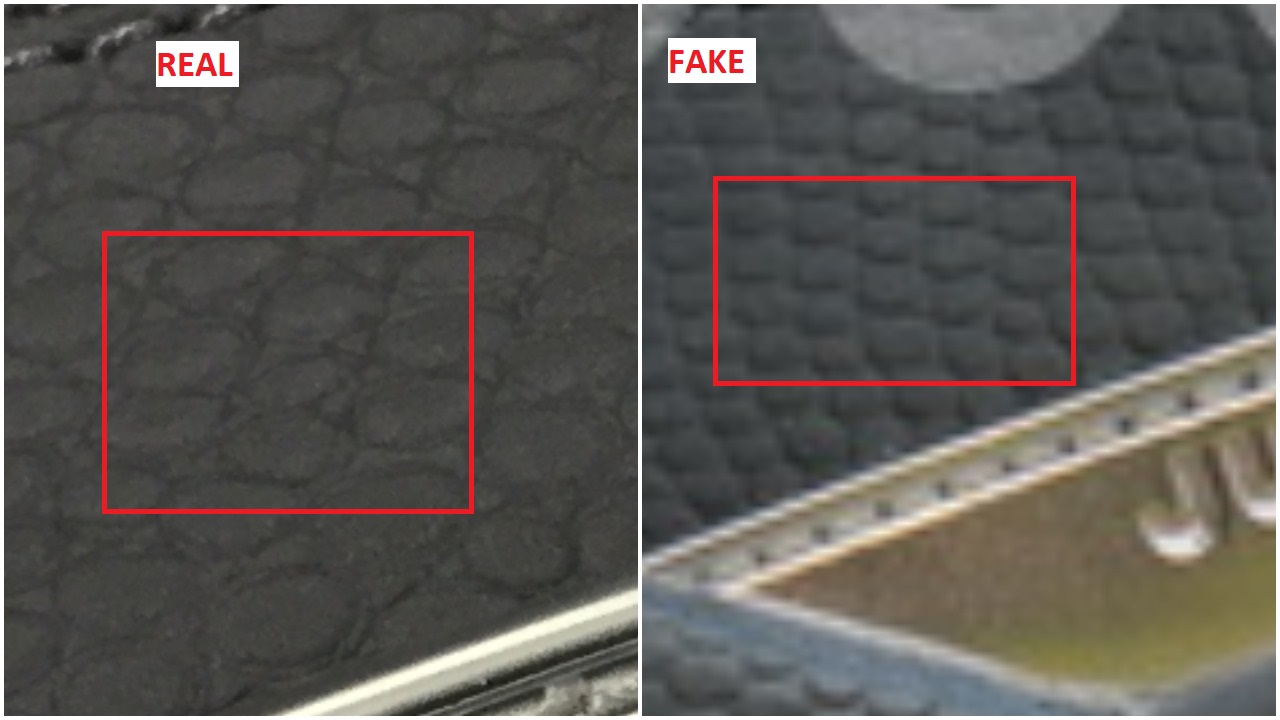 This is a picture of the bumps. You can see how more stretched and subtle they are on the real pair. 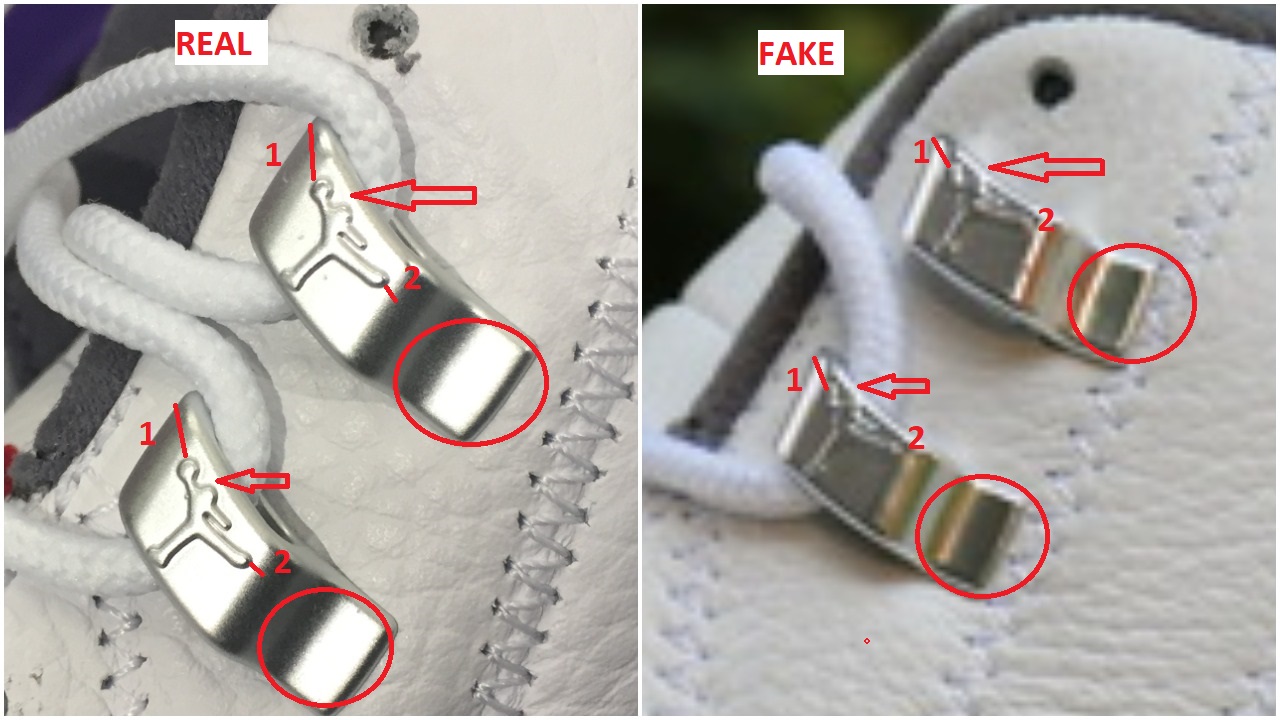 The metal eyelet is longer on the real pair. (1)& (2) the gap between the jumpman and the edge of the eyelet is wider on the authentic pair. The red circle is showing how how there are extra ridges on the bottom portion of the metal eyelet on the fake pair. 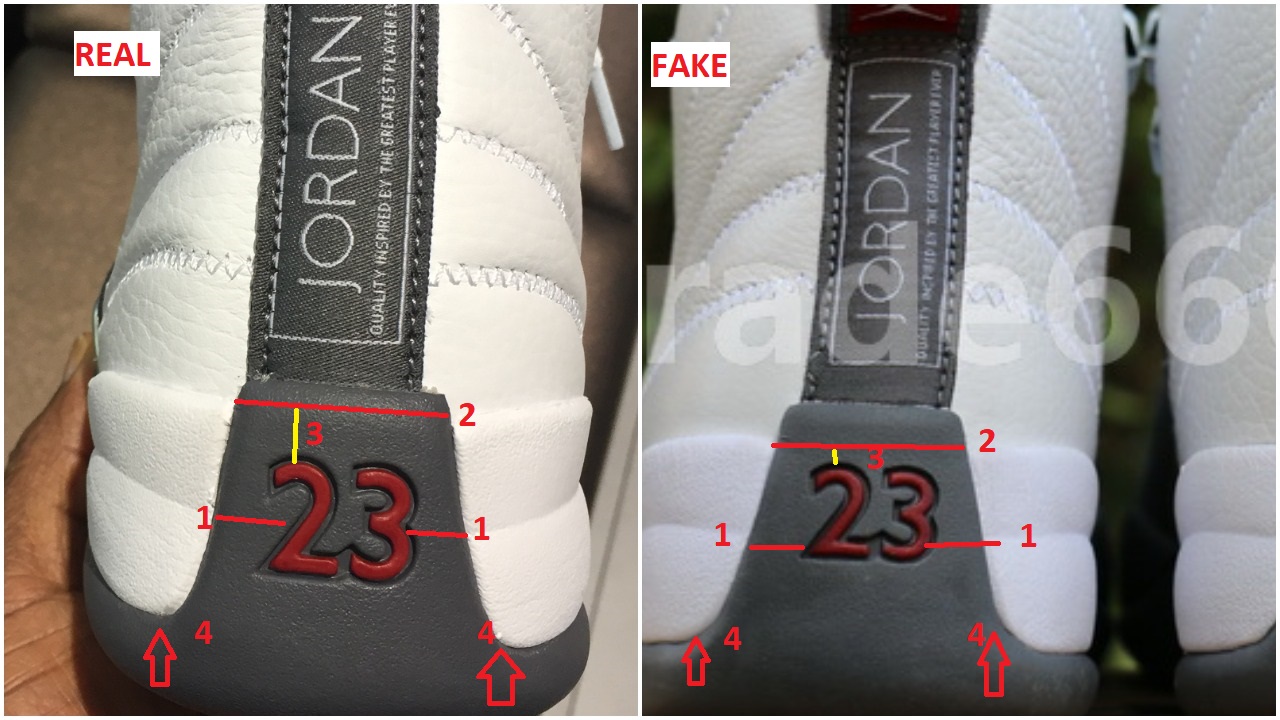 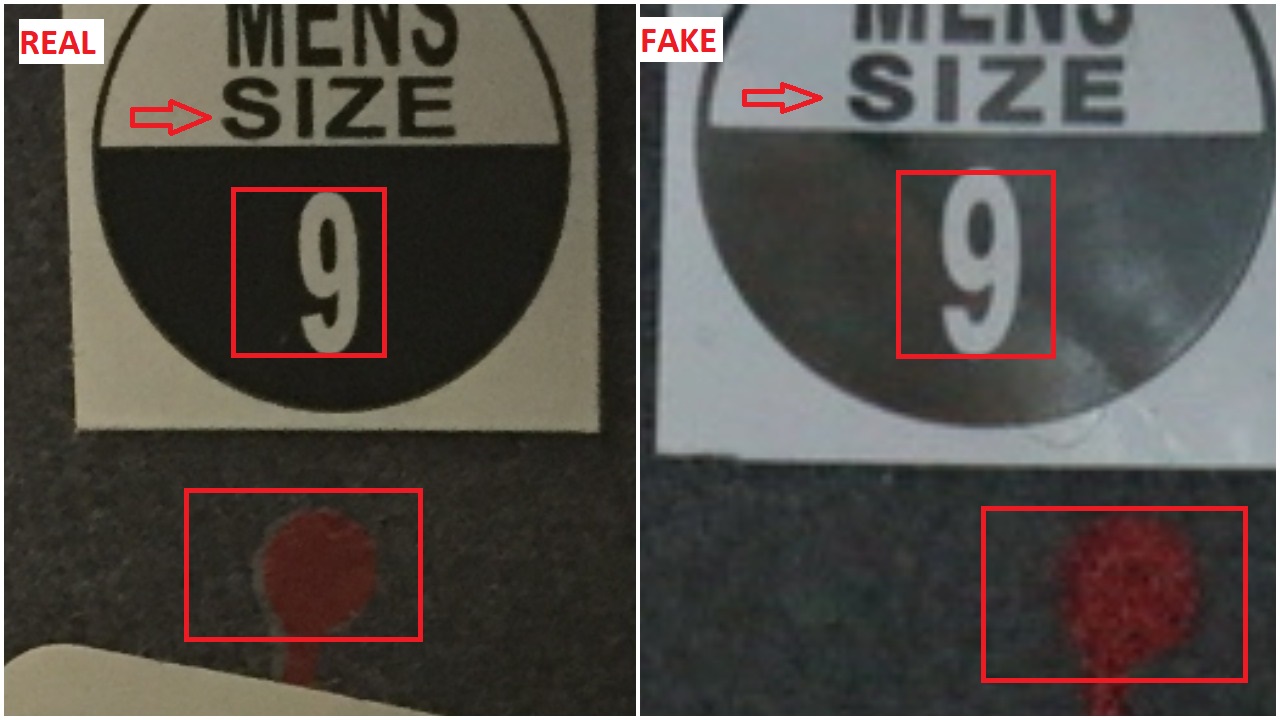 The sticker appears so pale on the fake pair. Not only that but the font, shape and size of the letters ( size) and numbers ( 9) are completely different. I also added the little box around the ball of the jumpman to show you that as soon as the wearer steps in the shoe, the ball will fade away, and that because the ink used on the fake pair isn’t indelible. 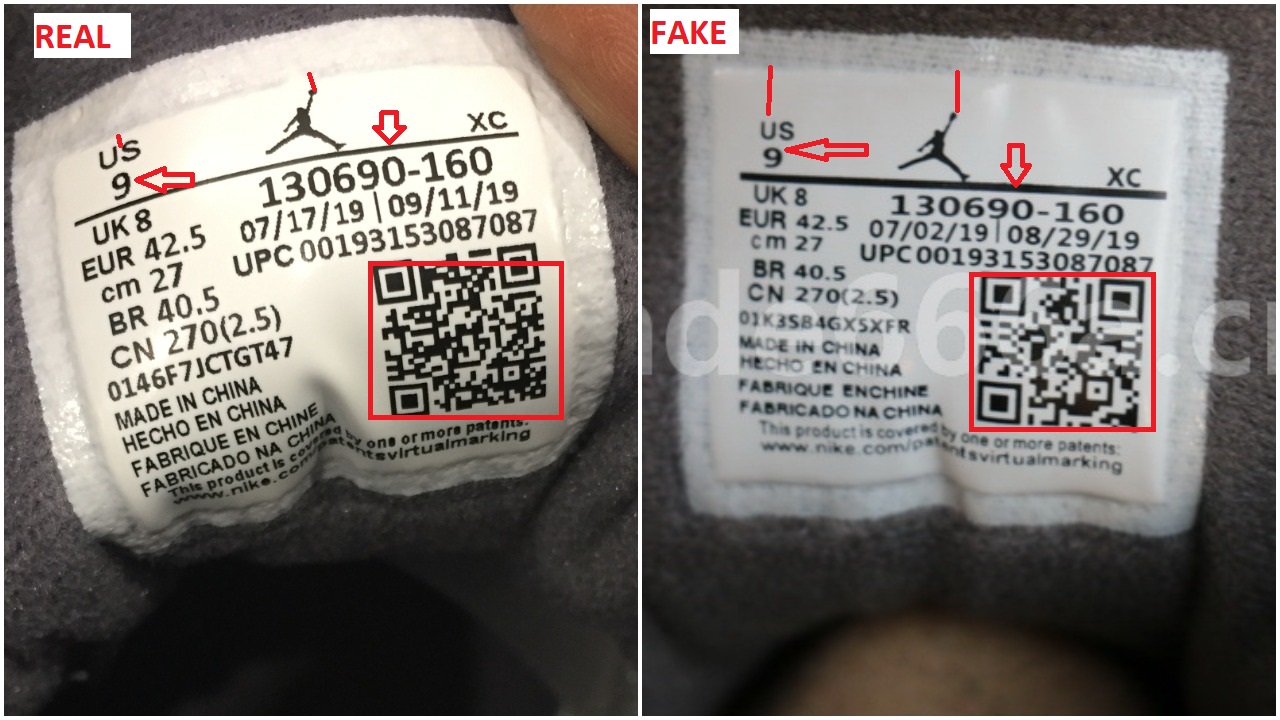 The gap between the wording ” us”, the “jumpman” and the edge of the inside label is bigger on the fake pair. The black line on which both jumpmen, “9” and the “xc” sit is more bold on the fake pair ( see yellow arrow). The QR code graphics are different ( now I don’t if that matters but I jsut wanted to point it out).

There you have it folks, if I notice more differences in weeks to come, I’ll be sure to update the post.

You can buy it now via Housakicks SHOP -CLICK HERE