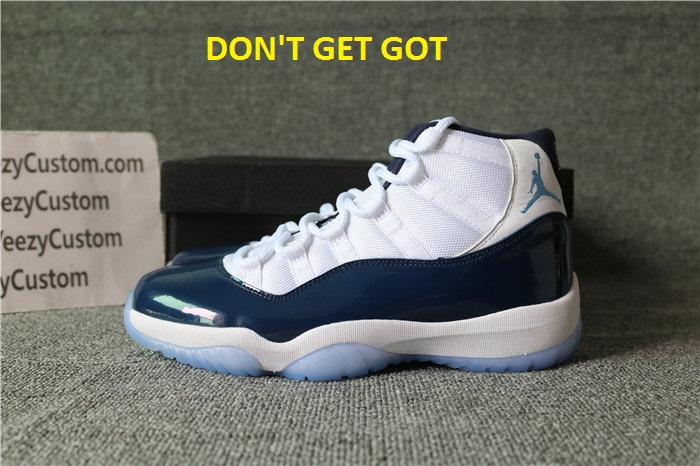 On May 8, I shared an article about the upcoming Air Jordan 11 White Navy; the shoes are supposedly releasing in November, a prelude of the Christmas edition Air Jordan 11. It’s a routine of mine to scan black. grey market websites for precautionary measures- basically running parallel to them  to keep you guys informed. No offical pictures of the shoes have emerged yet so there is no way I can do a side by side comparison, but what I’ll do is show you the shoes, and point out areas of the shoes where most flaws occur.

Before I show you the pictures , a good question to ask is : how do these websites get the shoes so early?Nike manufacturing factories are all located overseas ( because of cheap labor); it isn’t hard for factory workers to steal a sample, its blueprint, etc. What happens after is what most of you are victims of- the samples are sold online for a lot of money ( and you’ll notice that most of the stolen samples do not have a BOX). These samples are then replicated with OEM materials, but they always tend to be flawed because of lack of quality control ( Nike usually won’t release shoes that do not meet their standards). But the illegitimate underground factories do not care about QC as long as the shoes look close enough to the authentic product. Now that you understand a little bit somehow how these shoes are available early, here are pictures of the early/ replica Air Jordan 11 White Navy. Once again, I’m using the Gamma blue Aj11 so it may be far -fetched but apart from the colorway the silhouette and most details are the same. So if you look at the fakes, the jumpman isn’t the same and the edges shown in both arrows are very rugged, not smooth which indicate a poor craftsmanship. The infamous widow peaks? Interestingly enough, this year’s space Jam 11 had widow peaks so that is something to keep in mind, Jordan Brand will definitely surprise us again. One thing to also look at closely is the outsole and the tip of the toe box; if you were around when the Concords came out the early pairs ( fakes) had a clear toe box while the authentic pairs that later emerged had milky toe box. The carbon fiber shanks were placed there for lightweight purposes and torsional rigidity. The fake ones alwasy have different patterns and the material isn’t quite the same ( usually more flimsy, and sometimes painted on ) on the fakes. Check out the additional pictures below and stay away from anyone claiming to BE THE PLUG OR TO HAVE THE PLUGS. You can purchase authentic pairs of the Air Jordan 11 White Navy  on eBay from our featured sellers, CLICK HERE

The video below will also give you additional information