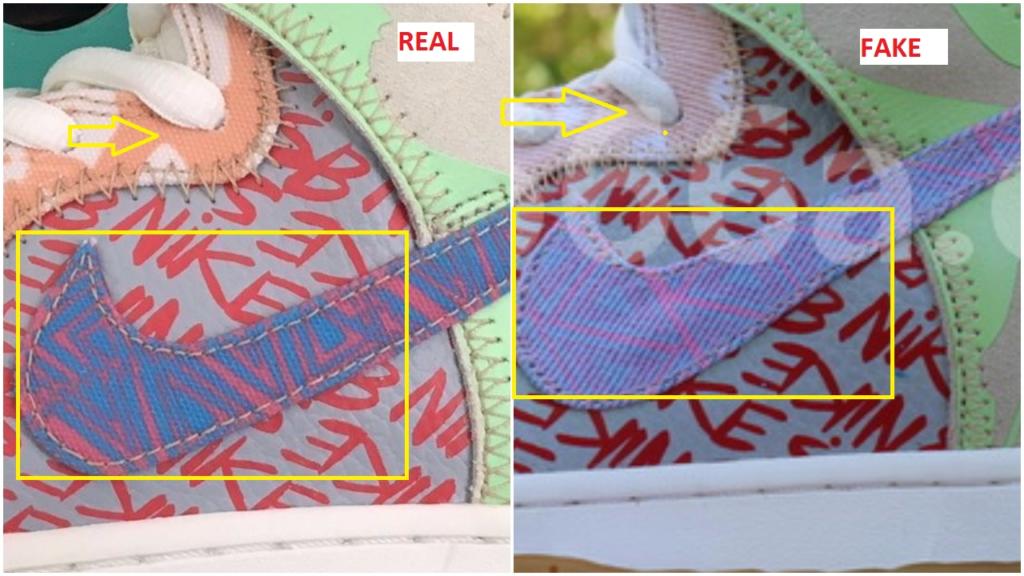 The highly anticipated Thomas Campbell Nike What The SB Dunk High released in the month of July. Being very limited, the shoes  were only available via select retailers. So I’m not surprised that fake pairs have already emerged, and here are quick tips to identify and avoid the fakes. The list isn’t is exhaustive as counterfeiters are constantly making updates to their replicas. Here is how to spot the Fake Nike SB Dunk High What The Thomas Campbell The yellow square points out the differences on the panels and the  embroidered swoosh logo ( the panel containing the logo on the authentic pair is of a light grey color with a dark blue swoosh, while the panel on the fakes is of a dark grey color with an almost light purple logo). And if you look a the eyestay (see yellow arrow), it’s of a peach color with white spots on the real paur  while the one on the fakes is off peach color. the yellow circles shows you the differences in the eyestay’s shades ( peach on the authentic pair and off peach and almost grey on the fakes). The panels straps don’t bear the same colors as well ( see yellow arrow pointing down). And if you look at the heel counter, there appears to be a bump on the fake pair ( see red arrow). You can clearly see the differences pointed out in the pictures above ( check out the stitching, the placement of the holes, the nuances in colors/shades/tones). Again, check out the differences on the panel straps, toe box ( tone/color) and the stitching highlighted in the yellow rectangle. You can clearly the slight differences on the pull tab and the cut on the heel liner ( the cut is a deeper on the fake pair). Notice the differences in the tone of the colors between both pairs highlighted by the arrows and yellow squares. You can clearly see how the outsole of the authentic pair is two-toned ( see yellow rectangle). 100 pairs of the shoes were released in special boxes exclusively via ATLAS, and ironically the fake pairs also came in the special box but what give them away was the size label as showed in picture above. Well there you have it guys, now here is where to buy authentic pairs: