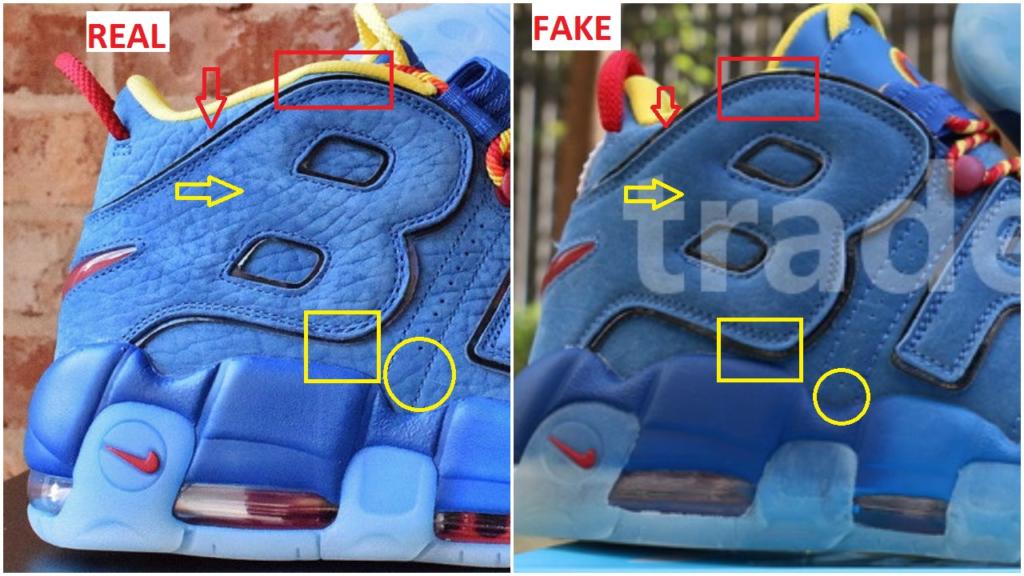 I’ve dreaded this comparison for a month because the fakes are a bit hard to detect. I finally decided to do it this morning. One thing is clear, one of the ways major brands like Nike will defeat the fake industry is by creating intricate details on their shoes. Upon closer inspection, I realized how many flaws the fake doernbecher uptempos were loaded with. Anyway, for this comparison, the sizes used were 11 and 12. Here is how to spot the Fake Nike Air More Uptempo Doernbecher The gap between the swoosh logo and the midsole is bigger on the fakes, the material is obviously smoother on the fakes ( you can see how the wrinkles on the authentic pair are very vivid). The liner on the back is distorted on the fakes indicating poor craftsmanship ( see red square). The air pockets near the forefoot has a bit of yellow in it on the authentic pair while the fake air pockets are clear. The “Be Strong” text is supposed to be subtle, but on the fakes it’s very apparent and bold. Moreover the edge of the outsole is translucent/ clear on the fakes. Not that this matters that much but stay away from anyone that is selling a pair with the production date you see on the picture above.

There you have it folks, if I happen to find more flaws, I’ll be sure to update the slides.