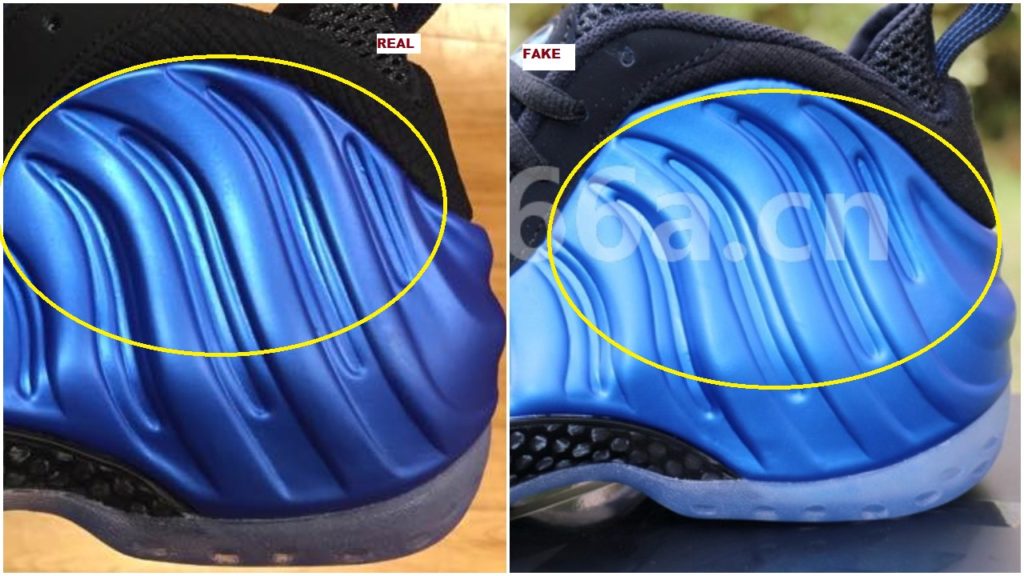 These Fake Foamposite One Royal OG XX  are probably the hardest to detect, and frankly they literally have no flaws ( besides a couple of nuances on places where no one would really pay attention to). Nonetheless I’m going to show you where both shoes differ in order to help you make safer purchases online. Were you able to identify the fakes? I’m sure some of you guessed it by looking at the Watermark on the right picture. So the pair on the right is indeed the fake one. Now let’s look for the differences ( by the way, they are both size 8 so they should look the same). The pattern of the grooves is not the same ( see yellow circle,  they are both size 8 so the pattern ought to be identical but to be honest most people wouldn’t care about it). Also see where the grooves end, on the fake pair, the tip of the groove doesn’t touch the lining ( but on the real pair it is adjacent to the lining). Take a look at the rectangles, on the authentic pair the threads are closer together hence form sharper angles; but on the fakes, there seems to be more space between the waves  ( so the peaks are more round). Check the oval circle ( the spacing between the penny logo and the blue bottle like shape is extremely small on the fakes). Not only that but a quick look at the yellow arrow shows you that the pattern of the shape is not the same on either pairs ( they are both size 8). On the inside label the UPC code on either doesn’t end in the same digits. Like I said these aren’t major flaws so I can understand why some folks wouldn’t mind buying the fakes.

Footlocker and other websites still have many pairs in stock; I walked into DTLR today and they still had basically every size. So check your local spots prior to buying the Foams online.

Where To Get Authentic Foamposites?

You can buy authentic pairs on eBay from our featured Sellers, CLICK HERE