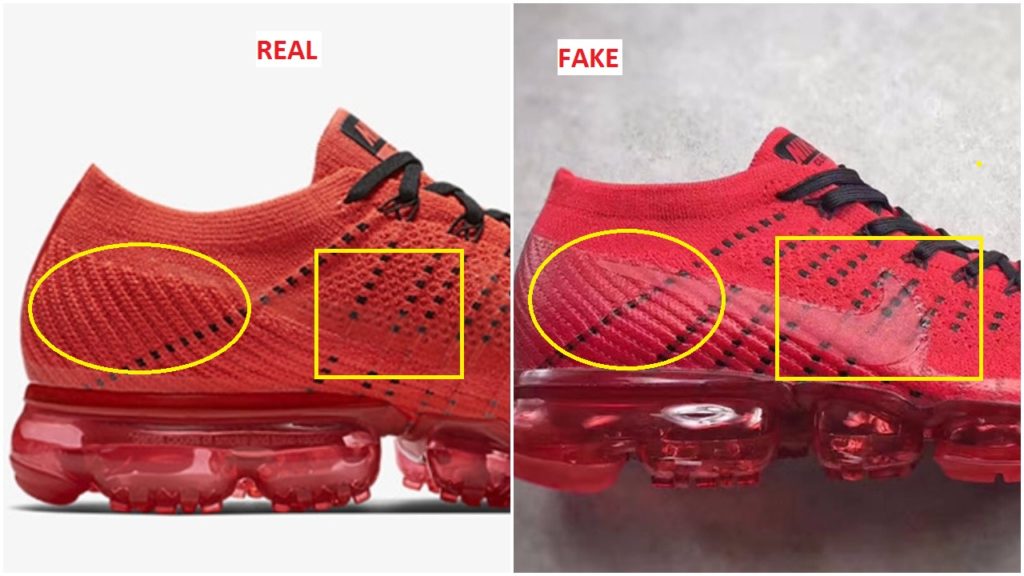 The Clot Nike Air Vapormax Flyknit is the latest project birthed out of collaboration between Nikelab and CLOT. Clot is known for their 2006 Air Max 1 Kiss of Death

which featured a clear toe box and clear panels. Being a very limited shoe, it is no surprise that the Clot Vapormax has already been replicated, and the sad part is sometimes, sneaker blogs unknowingly share pictures of the fakes early ( under the guise of being the first to have breaking news) but  in the process deceive the readers. Well, here is a quick guide identify the fake pairs that are circulating. Do I need to stress out the fact that there is a major difference in the colors between both pairs. The authentic pair is crimson red while the fake pair is cherry red. The no-sew overlay covers the entire quarter panel on the fake pair but you don’t see it on the real pair ( see yellow oval circle). The spacing in the flywire cables isn’t the same and the swoosh logo is very subtle on the authentic pair , but very visible on the fakes ( see yellow square). This is a closer look at the quarter panel differences; you can clearly see that the no-sew overlay only covers a very tiny portion on the real pair ( see yellow oval circle). The tab on the Fake Clot Nike Air Vapormax Flyknit is covered by a no-sew overlay that bears the Clot logo; but on the contrary the tab on the real pair lays on top of the overlay. Also check out the differences in the ” clot logo” between both pairs. And lastly, notice the differences in the air pockets and how the pattern of the grooves  extends further on the authentic pair ( see yellow rectangle). Through the outsole , you can see that the bottom portion of the sockliner on the fakes has vertical lines which are nowehre to be seen on the authentic pair. The shape and pattern  of the air pockets aren’t the same on either pair. You can see the CLOT wording through the outsole on the authentic pair, but the fake pair has a nike swoosh logo instead.

Well there you have it guys, I’m sure in the weeks to come, the illegal factories wil probably create a new breed of replicas CLOT so stay tuned for further updates. The shoes will be extremely limited and will be available from the stockists below.