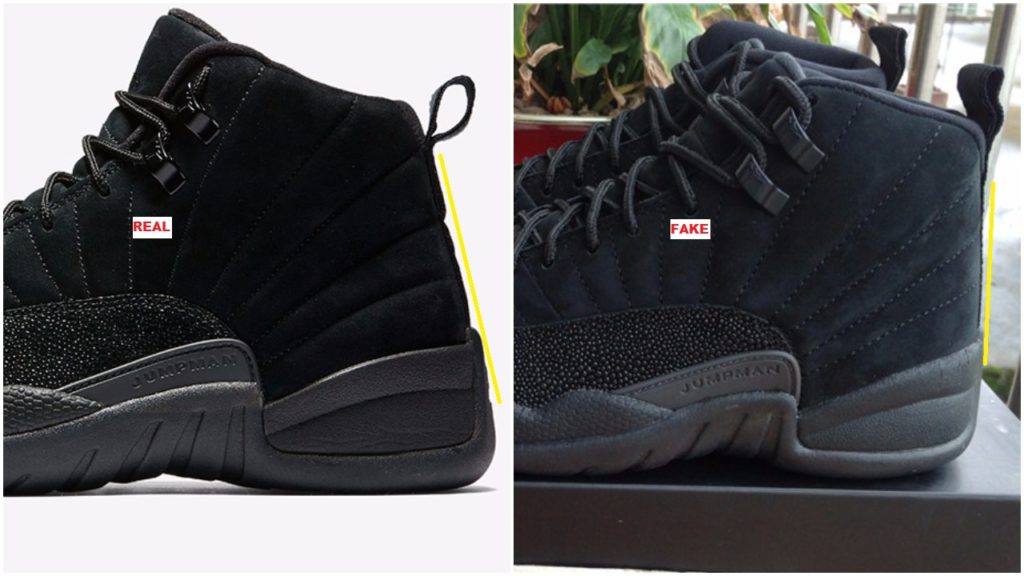 The Fake Black Air Jordan 12 OVO have been on the market for almost half a year; just take a minute to browse eBay

and you’ll find several sellers claiming to have legitimate pairs. They are selling them for as high as $500 and probably paid anywhere between $80 to $140 to acquire them. The fakes come in different grades as many of you know and replica sellers usually categorize their fakes on their websites. But most of them get their inventory from the same pirate factories which is rather interesting. Anyway , I won’t waste any more of your time so here is the comparison. Some of you may look at this pictures and say to yourselves, well the colors are different so why even bother? there always lighting issues so I try my best to disregard that aspect and rather focus on actual flaws. This never fails but the tongue is always shorter on fake sneakers ( see yellow arrow). And also on this one, you can clearly see that the eyelets do not look the same. What I’ll do is add another picture so you can see how different the eyelets are. Again the tongue is shorter on the fakes and the eyelets are absolutely dissimilar. The mudguard on the fake pair extends beyond the plastic tab but on the authentic pair it is properly aligned with the tab. The mudguard also appears wider on the fakes ( see yellow arrow). Look at the heel counter’s angle on both pairs ( it is pretty much vertical on the fake pair and steep on the authentic pair). The fake pair above is of a different grade. Now here I ran into a lighting issue, if you look at the fake pair, it appears to have a lighter heel and midsole in contrast to the darker shade on the authentic pair ( please take this one with a grain of salt). The main thing I want you to focus on here is the tab on the back- the end of the tab ( containing the finger hole, see yellow arrow) is longer on the fake pair in comparison to the authentic one. And the “23” on the fakes is also slightly bigger than the one on the real pair. I’m also adding a picture of the inside label so you can see the production date of the fakes and avoid any shoes you see with similar details. RELEASE INFORMATION OF THE AUTHENTIC OVO

I’ll add a list of retailers carrying the shoes shortly; for those who don’t want to go through the release day mayhem, you can pre-order them on ebay now from our featured sellers, CLICK HERE