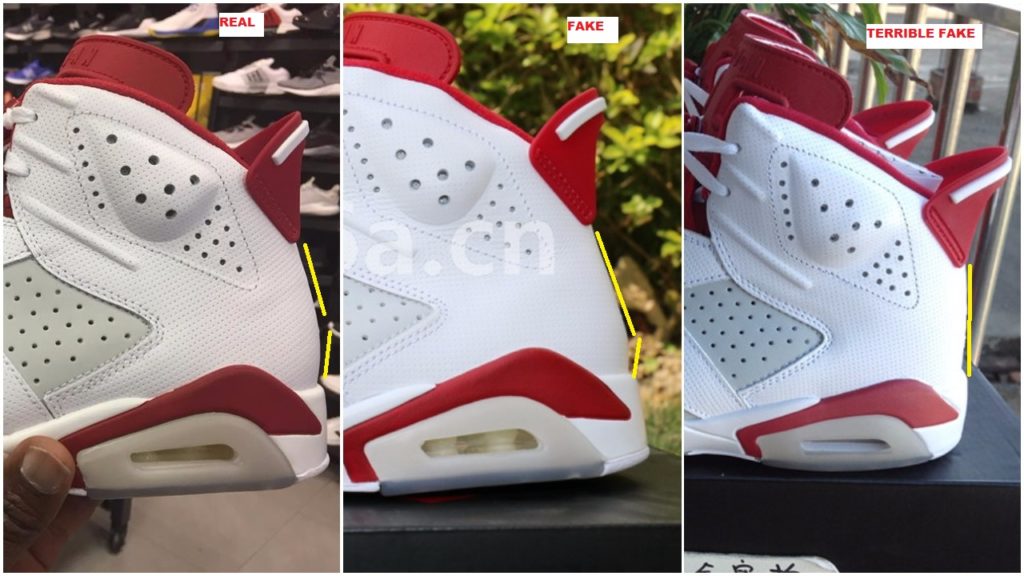 The alternate 6 released this week end, and you’ll be fool these days if you still buy early bootlegs. All Jordan retro sneakers are literally sitting in stores for months, and eventually go on sale so you just have to be patient. Anyway, I spotted a few pairs of the Fake Air Jordan 6 alternate and wanted to show you quick ways to identify them. From left to right, what you see is the authentic pair, then the “AAA Fake” ( basically the one people commonly call the unauthorized authentic), and then on the far right is the entry level fake. You will notice from the yellow lines that each has a different angle at the heel counter. The entry level fake has a vertical heel counter, the AAA fake has a roughly obtuse angle and the real pair has a steeper one. The synthetic leather overlays have more visible dots on the real pair, while the fakes have dots that are barely noticeable. Also the placement of the holes on the forefoot nubuck panel is completely off on the fakes- I used two different set of fakes here for that very reason. Again look at the holes on the back panel, you can clearly see them on the authentic pair; on the fakes, they are very minuscule. The fabric on the heel collar appears to have lines on the fakes, while the real pair is line free ( not a big deal but worth mentioning).

Again , this comparison is not exhaustive and is purely based on my own observations; feel free to add or retract from it by leaving a comment below.

Here is where you can find authentic pairs

You can also buy them on eBay from our featured sellers, CLICK HERE