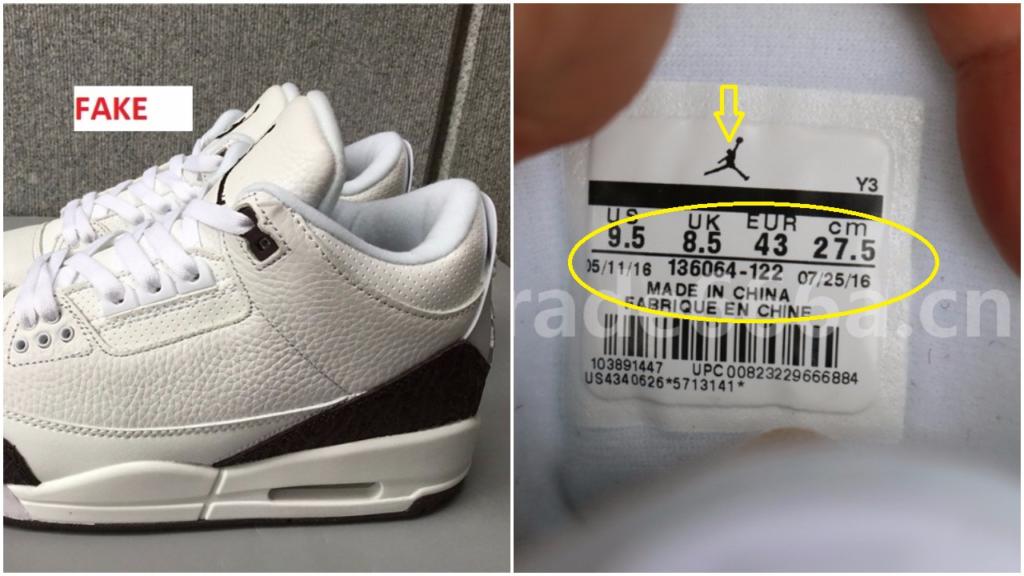 you’ve probably heard my Air Jordan 3 mocha story several times; for those who haven’t I bought them for $79.99 in 2003 from Lakeforest Champs store in montgomery county. The Mocha 3 is making a comeback this year, and I shared a post about it a while back, see link below. But today I just wanted to warn you, and let you know that fake pairs are already in the market, and they look good, so don’t be deceived. I don’t have an authentic pair to do a comparison so I’ll just give you some quick pointers to identify them. I know  some folks will argue with me about the slides above based on the fact that the real pair I’m using is from the 2001 edition. If whoever is selling the fakes claims his/her pair was the original one, you could ask him/her why is there  no discoloration. And if he/she says this is the upcoming 2018 edition, then I’ll show further down why he/she will be lying. Now back to the slides; you can clearly see that the 2001 pair shows signs of aging, which is typical. Also pay attention to the cut of the elephant print on the back panel- it’s lower on the authentic pair. and if you look at the uppers, the leather appears soft and smooth on the authentic pair and rough on the fakes. And I’ll also add that the bumps on the back tab appear wider on the fake pair. Clearly, if the shoes were to release in 2001 then the production date wouldn’t be 2016, and if they were to drop in 2018, then I could also say that they couldn’t have been manufactured in 2016 ( that’s a 15 year gap on one hand and 2 year on another hand)- impossible. Once again, everything is wrong on the fake box, the label is wrong, the 2001 pair came with the conventional “Jordan Face” box. I’m sure the 2018 pair will come with the “cement printed” box but the label is still wrong ( it says BHM on it which means Black History Month). The poor paint job on the outsole is also a good indicator of the shoes being illegitimate.

The rest of the pictures I just added for your convenience; if you come across anyone selling a pair of Mocha 3 similar to the one in the post, stay away from it. Buy it via StockX-CLICK HERE