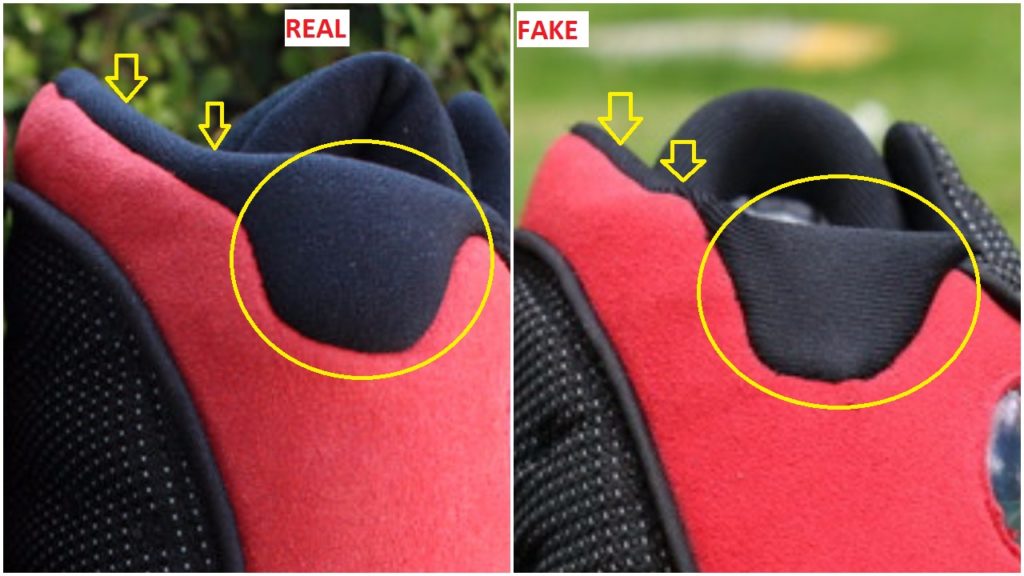 The fake pairs of the Bred 13 have been out for months now but without the backdrop of the retail pairs, pointing out the flaws on the replicas is complicated. The last thing I want to do is mislead people because the serious implications, so I take these comparisons very seriously. The one you see below will be updated probably in the next 48 hours once I physically get my hands on the retail pairs. I had to rely on pictures from reputable sellers on eBay. Here is how to spot and identify the Fake Air Jordan 13 Black Red The heel liner is pretty much non existent on the fakes as pointed out by the yellow circle. I could also argue about the difference in the red color between both pairs-the fake appears to be of a darker shade. The dotted lines on the panel overlays do not have the same size and orientation between both pairs, and the the fake pair seems to be a bit bulky if you look close enough ( see yellow squares). I’ve also put another emphasis on the difference in the color shade between both pairs ( see yellow arrow-fakes are a bit darker). You can see clearly how much thicker and padded  the ankle liner is on the authentic pair in comparison to the fake pair ( see yellow arrow). Moreover the shape of the black tab on the back is not the same between both pairs; and the fake tab is made up of a different material with visible horizontal lines. Also look at the poor craftsmanship on the fakes ( you can’t miss it). The placement of the holes is completely off on the fakes ( and that’s mainly because the tongue of the fakes is shorter). The Jumpman logo is smaller and is totally different from the one on the authentic pair. This needs no explanation, you can clearly see how the jumpman logo differs between both pairs; and check out the poor craftsmanship again ( the carving around the jumpman is despicable). I’ve been criticized in the past for pointing out differences in the production dates and factories so take this here with a grain of salt. One thing I know is that the fakes were manufactured in LN3 between January and April of 2017. Also look at the differences around the edges pointed out by the yellow arrow.

Well, there you have it folks, for those looking authentic pairs, here is a list of stockists and  legitimate eBay sellers you can buy from with confidence.