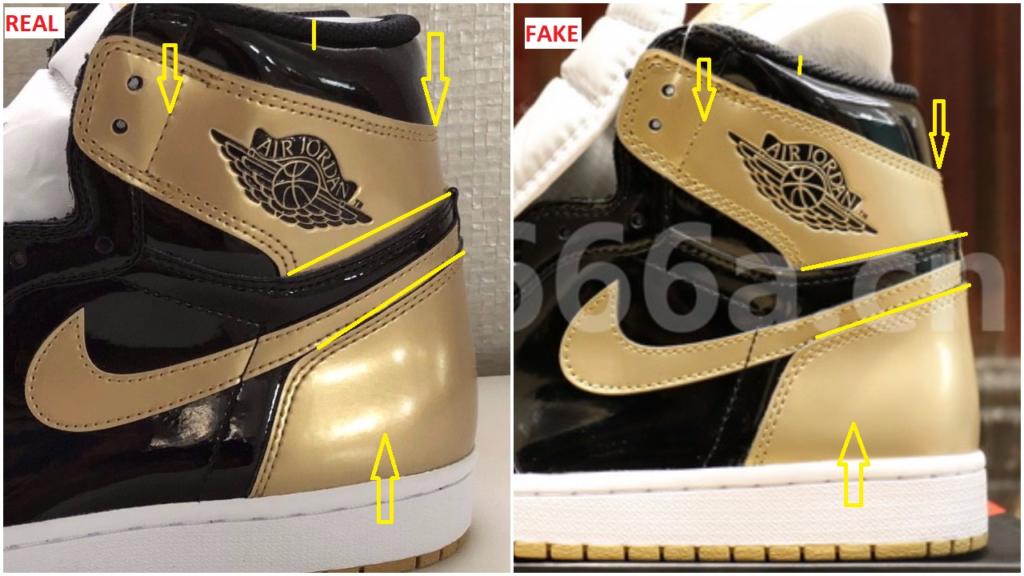 The Complexcon event geared toward  bringing together pop culture, art, food,style, sports, music, and more took place last week and was epic. During the event, a pair of Jordan retro, the Air Jordan 1 Gold Top 3 aka Complexcon was officially unveiled and became an internet sensation. Yesterday during one of my Sherlock Holmes odyssey, I came across a fake pair of the Complexcon AJ1; I was really surprised on how fast these were manufactured considering the fact that the shoes only made public news a week ago. This shows you how prolific the replica industry is. Anyway I don’t have neither the authentic nor the fake pair on hand so all I could rely on were pictures I fetched from reputable sellers on eBay to compare it to the fake pair. Once again, look at the differences in the gold color ( I’ve already pointed it out on the first slide). I’ll also add the fact that the authentic pair is more shiny while the Fake Air Jordan 1 Gold Top 3 Complexcon pair appears dull. The little yellow square will also show you how the stitching on that area isn’t the same between both pairs. The jordan wings logo has a bolder font and the shape of the ball and the angel wings are totally dissimilar between both pairs. once again, the outsoles do not have the same shade of gold ( the authentic pair is empire gold while the fake pair is gallery gold).

These are the major differences I spotted; however I’ll add additional pictures of the fakes for your convenience.