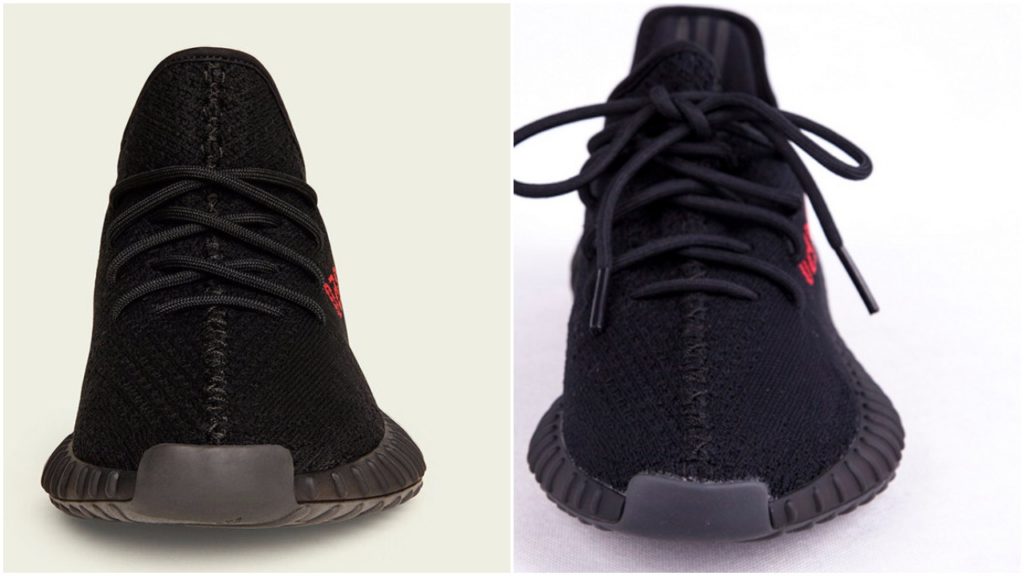 It was a little hard to find official pictures of the Black and red Yeezy 350 V2; as you already know the Fake Adidas Yeezy Boost 350 V2 Black Red CP9652 is on the market. I believe in prevention rather than damage control, but too often people believe fairy tales of so called “Sneaker connects” who sooner than later get exposed for the kind of products they really carry: good old fakes from Putian made available on Dhgate or taobao. I always start these comparisons with the same question; take about 3 to 5mn and look at the picture above. Are you able to tell the authentic pair from the fake one? This never fails, the fake pairs tend to always have flimsy and very short tongues. Check the picture above: the real pair has a very sturdy tongue while the fake pair has a shorter tongue that appears tacky and deformed. Moreover the lining around the ankle looks totally different ( check the yellow rectangle). Unfortunately, I don’t have a picture of the authentic box , hence the only thing I can do is show you images of the fake box.

Here are additional pictures of the fakes I’m sure some of you may want to know where to get authentic pairs so here is a list of sellers with legitimate pairs:

Stadium Goods-Check Them Out On Release Date

you can also purchase the shoes from our featured trusted ebay sellers, CLICK HERE