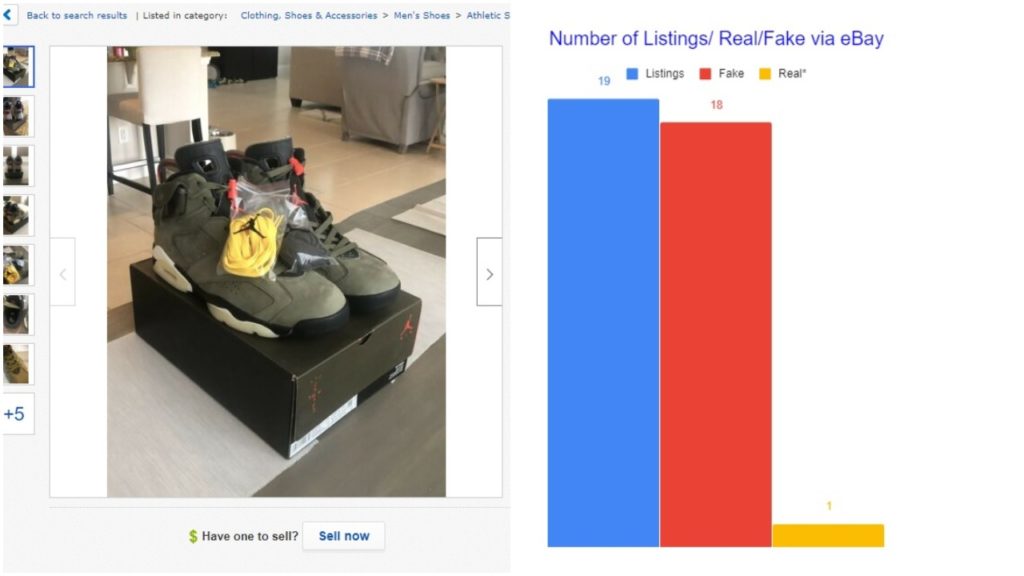 It’s no secret that eBay is tainted with counterfeits, but the boldness with which some of the sellers operate on the platform is flabbergasting. I was looking for images of legitimate pairs of the Travis Scott Air Jordan 6 to do a side by side comparison with the bootlegs that are circulating, and eBay was no help. Most listings featured  stock photos ( or photos obtained from sneaker blogs); but  the worse part of this whole ordeal is that sellers with listings with actual images were carrying replicas. Some of them were more honest and disclosed the identity of their shoes while others ( swindlers) didn’t. I think buyers are at the point where they don’t even care whether the shoe being purchased is legitimate or not as long as it’s built with the “OEM” materials. I wanted to show you how many fake listings were currently on eBay; before I do that , let me show you some listings with key phrases that indicate that the items being sold are counterfeits.

This seller is of a more noble character, he is shrewdly telling the buyer that he is carrying replicas. UA stands for “Unauthorized Authentic”. The term may have changed with time but that’s what I always knew it to mean. Basically UA sneakers are built with the “OEM” materials but aren’t supposed to be made. They look like their legitimate counterparts and their origin is unkown (you can fill in the blank).

Now this seller is obviously selling fakes but he won’t disclose the true identity of his sneakers. The shoe is supposed to release on September the 14th and if he has them on hands now, please don’t fool yourself, they are 1000% fake. The same seller has a listing for a pair of Jordan 6 Black Red and he made sure to add the word ” 100% authentic” in that listing, which means he knows the pair in the screenshot above is fake since the word “authentic” is missing.

He even offers to give a copy of the receipt for the Jordan 6 “Bred” so I’ll let you draw your own conclusions.

Now the seller above is the type that I despise, he is selling the shoe for almost $800 and his description sounds more like a fairy tale. Check out the highlighted phrases and zero in on his feedback ( only 2). He cares nothing for the fact that he is scamming and the amount of money he demands for theses fakes is ridiculous. His profit margin is  about 700% since he probably won’t pay more than $120 for these good fakes.

This seller is at least not overpricing his replicas, he is selling them for $230 and I’m sure the buyers know exactly what they are getting. The one thing that made me chuckle was the location of the item ( zero in on the red arrow it says Yukon, Oklahoma, China). The seller is basically letting his buyers know that he is buying them straight from Putian ( the headquarters of fakes). It’s amazing that he was able to sell 8 pairs.

I’ll stop here and now show you many current listings on ebay are featuring fake sneakers out of the 19 listings on the platform, refer to histogram below 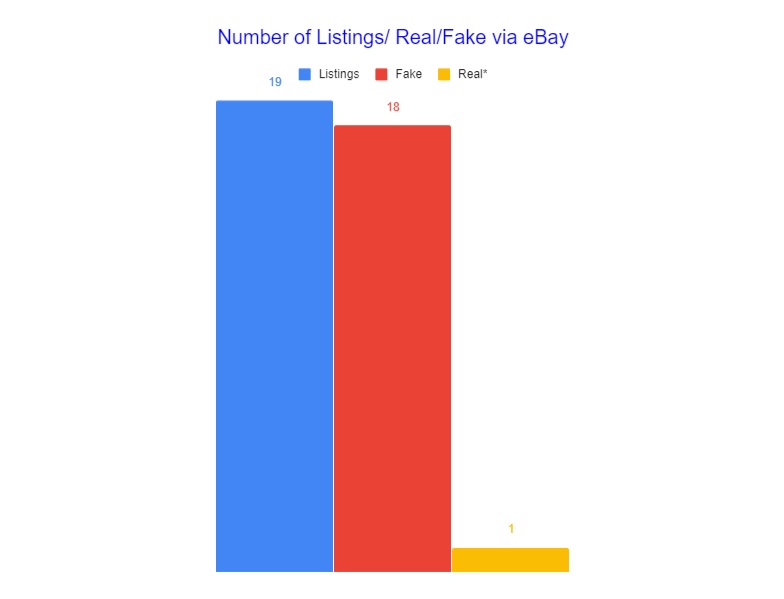 Out of the 19 listings of the Travis Scott Air Jordan 6 currently posted on eBay , only one listing is potentially featuring an authentic pair while the remaining 18 listings are auctioning replicas. That means that 95% of the Jordan 6 Travis Scott being sold on eBay at this moment are fake. Now you understand why StockX created the perfect platform; eBay turned a blind eye to this problem for too long and relied on the feedback system ( and that has proven to be deceptive). I wrote a post a last week and i’ll quote one the observations I made,

But the most important information to retain from this is the huge difference in the number of sales between both companies ( 35 sales on eBay vs 1092 sales on StockX). The ratio is about 35/109 or 3.20% so for every 100 people looking for the Obsidian 1’s, 97 are choosing StockX as their shopping destination against 3 on eBay

The most important thing that third party marketplaces have to take into consideration is the users’s safety ( safe transactions) and eBay has become so complacent that now the platform has lost a considerable amount of its sellers/buyers to safer marketplaces like GOAT and StockX. You can read my post about it, see link below

Since I don’t have a legitimate pair of the Travis Scott Air jordan 6 on hands, the only tip I’ll offer is to stay away from anyone selling any pairs this early. I’ll also invite you to check out the pictures below for additional pointers. 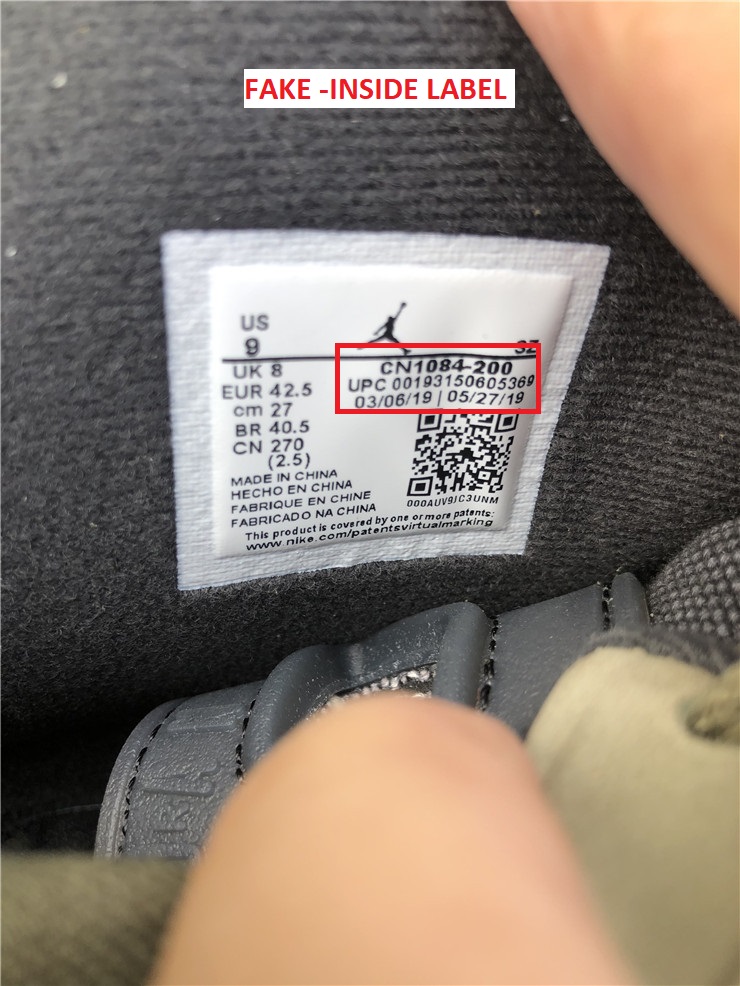 Ask to see a picture of the inside label, if the production date is identical to the one in the picture above (3/6/19-5/27/19) then stay away from the shoe. 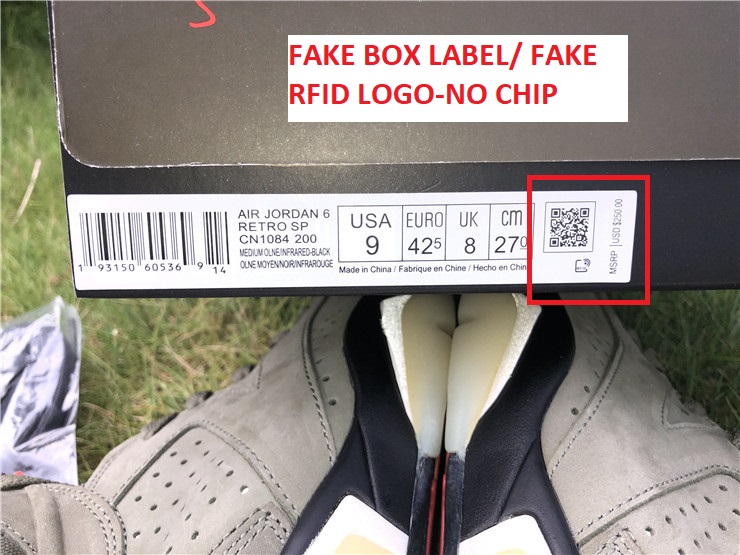 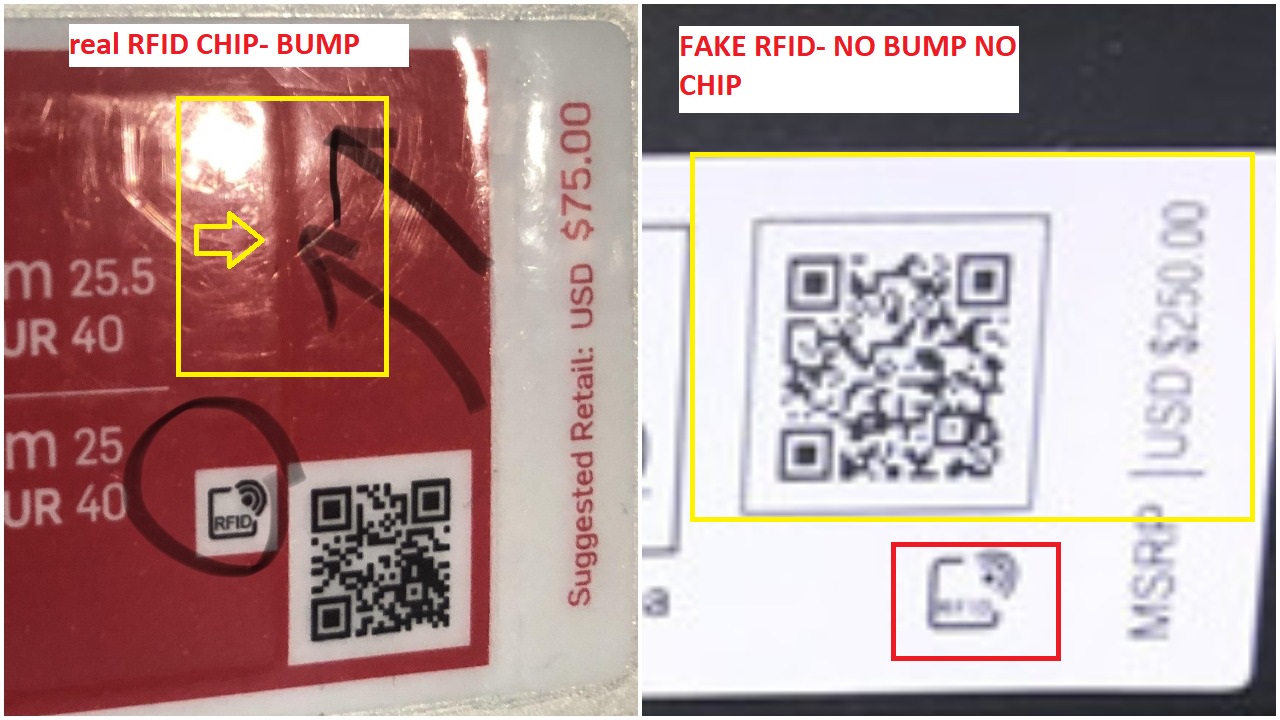 The RFID logo on the fake pair is just printed on and has no chip underneath it. If you look at the picture I inserted on the left side , You’ll see a little bump ( and that indicates the presence of a unique chip under the label that helps in identifying its provenance). The fake label doesn’t have that bump, the RFID is just printed on there. You can also verify it by peeling back the label and observe the antenna & chip concealed underneath.