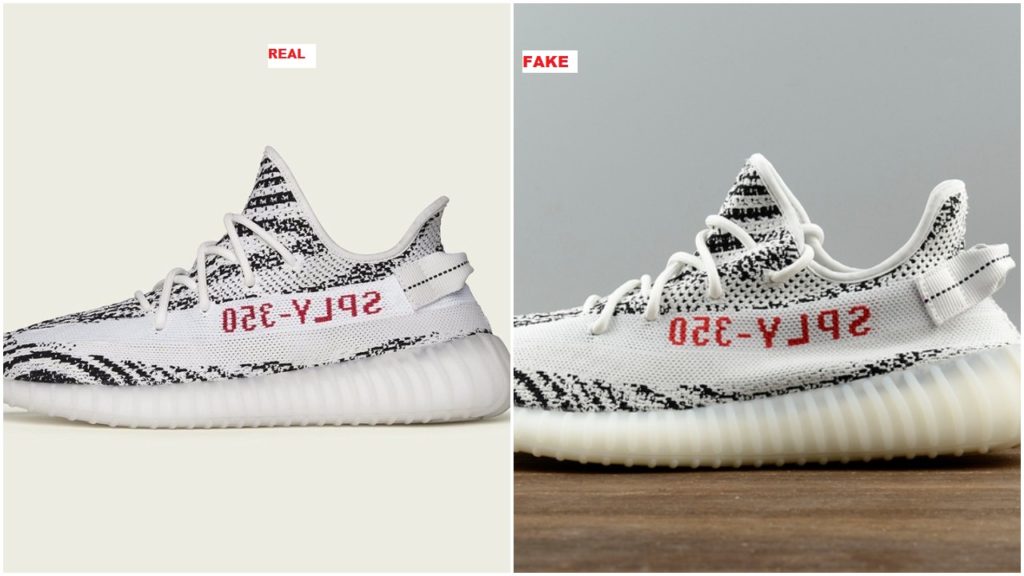 There is a guy on ebay who is openly selling a pair of the Fake Adidas Yeezy Boost 350 V2 Zebra ; he kind of hides the fact that they are replicas by using the word “early release”, pretty much a nice way of saying: “you ain’t getting the real thing homie”. I found about 3 official pictures of the shoes and did a quick side by side this morning to spot any differences. There certainly some flaws but I can understand why people don’t mind buying the fakes; but at least if you’re going to buy replicas, don’t be stupid enough to pay $600 or more for them when you can buy them for $60. Would you be able to tell the difference between both shoes without looking at the labels on them? The tongue of course is usually short, flimsy on the fakes compared to the more sturdy and longer tongue on the authentic pair. If you look at the ” SPLY-350″ wording, the alignment has a cury shape compared to a horizontal alignment on the authentic pair. I’ll also add that the font and colors differ on the wording ( and I don’t think it has anything to do with the lighting). The toe box has an abrupt cut on the fake pair ( see yellow arrow) and the space between the white strip and the tip of the toe box is bigger on the legitimate pair. The tip of the toe box looks slanted on the fake pair and is horizontal on the real one; I also noticed that the fakes have a lightbone sole in contrast to a pure white sole on the authentic pair.

Check out this video from one of the sellers overseas that sells fake ones:

I’ll add a list of authorized retailers getting the shoes soon, stay tuned for further updates.

You can also buy them now on eBay from our reputable sellers, CLICK HERE