Spread the love
The Nike Air Foamposite one Tianjin pays tribute to the basketball culture in the Chinese city of Tianjin. Tianjin is a metropolis located in Northern China, and is known for its deep basketball roots.The shoes were released in china on February 7th, 2015 and became an instant classic.
The problem with most popular limited sneakers is that they catch the eyes of the replica factories and the Air Foamposite one Tianjin was not an exception. Yes they have been replicated and in today’s post I will show you some differences between an authentic/real pair and a replica pair.

Look at where the arrow is pointing; the color of the sole is not the same on both pairs see pictures
Take a look at the circled areas, there is a dark shape on the sole of the real pair and none on the fake pair (see circles in the picture).

The back view shows that real pair has a wider curve and the fake pair is narrower and straight.
If you also look at the placement of the lotus flowers , on the real pair there is a gap between the edge of the midsole and the bottom of the flower but no gap on the fake pair.

The production of these 2 pairs did not end on the same date on. Now, not all pairs will be produced at the same time but it is also important to pay attention to that.
I am sure there are many other details that I have missed but hopefully this is sufficient enough to help you.
You can purchase other similar foamposite sneakers from our featured legitimate sellers on eBay-CLICK HERE 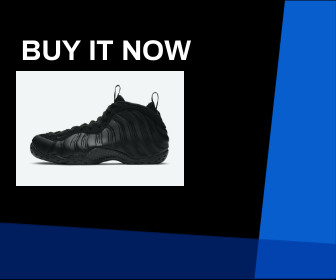