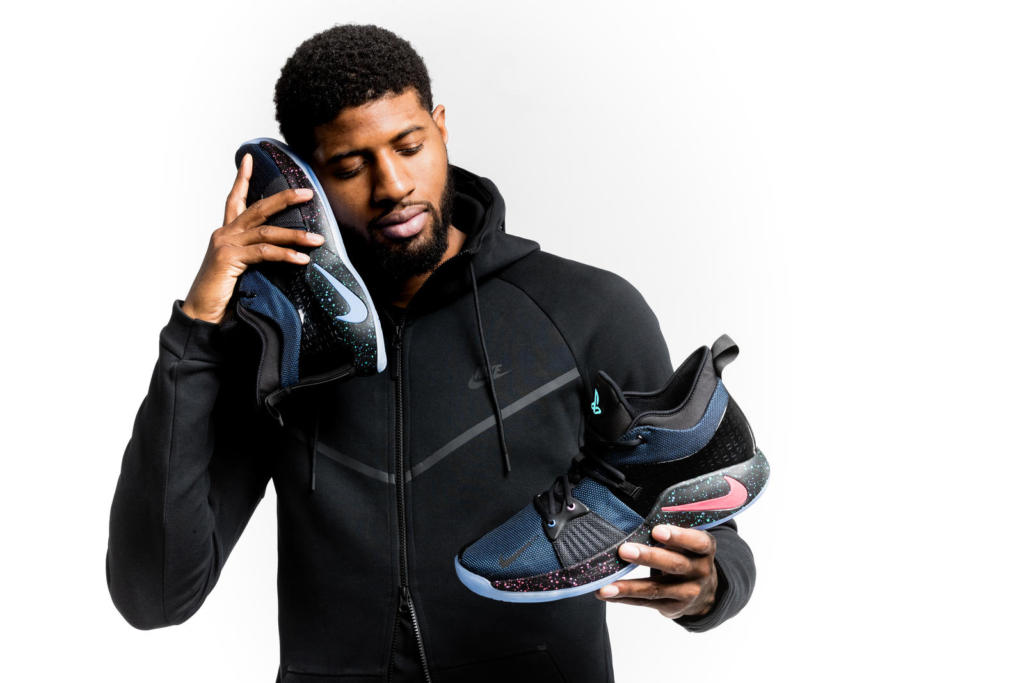 I shared a post two weeks ago about the second edition of Paul George signature shoes. Nike just shared an amazing article about the entire design process of the Nike PG 2, see commentary below, courtesy of Nike.

While the PG1 featured bootie construction and a prominent forefoot strap, the design of the PG2 favors a more traditional tongue construction. However, George still wanted a tight lockdown to be a hallmark of his line, so to solve for the switch, Hardman developed what he calls “dynamic wings” at the forefoot. While this offers the same level of lockdown as the prior system, the new aesthetic improves the overall fit. “It also eliminates some of the issues we had where the strap might be too long for narrow feet,” Hardman explains.

One of George’s favorite quotes is, “Don’t tell me the sky’s the limit when there are footprints on the moon.” It not only reflects his path from small-town Palmdale, California, to the NBA but also reminds that a first step is critical to his success on both sides of the ball.

“My love of basketball clicked early. I was crazy about the game. I would wake up early to dribble, playing outside barefoot and running up and down my street in hundred-degree weather with a backpack full of rocks trying to learn how to get more bounce,” remembers George. “I used to do those crazy things because my ambition was not just to play in the park or in the streets; I wanted to play at the highest level.”

Now in his eighth year in the NBA, George’s early work has paid off. However, there remains room for improvement, and that manifests in the PG2 via a new underfoot experience that’s predicated on responsiveness and feedback.

“We increased the size of the forefoot Zoom Air unit to 10 millimeters. And, he’s standing right on top of it now, whereas in the PG1 there was a little bit of foam between the unit and the foot. So all the way to the ground he’s got that full Zoom Bag and that really gives him propulsion in the forefoot,” explains Hardman.

Ultimately, the PG line isn’t just for George. With Hardman, PG works to find solutions for him and also for “the up-and-coming guys.” Given the number of other pros that embraced the PG1, the duo seems to understand the intangibles of a good on-court sneaker.

“I’m really excited, more so again for the performance that it’s going to give guys that follow me and are trying to get to the NBA, I’m most excited for those guys to get a chance to wear them and be in them and help them with their careers. At the end of the day, that’s what I want,” says George.

Aside from lockdown and responsiveness, enhancements for the PG2 also include improvements to overall traction. “Players are going to get everything that they loved in the PG1 plus a lot more,” George says.

Both George and Hardman know that design is only one part of the equation in signature shoes — George’s performance matters. The namesake athlete shoulders a responsibility to prove he deserves a signature shoe, and that his ideas about what makes a sneaker work in the toughest conditions of his sport stand strong.

“The thing I can do is go after the best players in our league and shut them down in the shoes. That’s the goal. That’s going to be the best way to highlight the PG2 and show all what they can do performance-wise,” says George. “I got my hands full, but I got the right shoes for the job.”