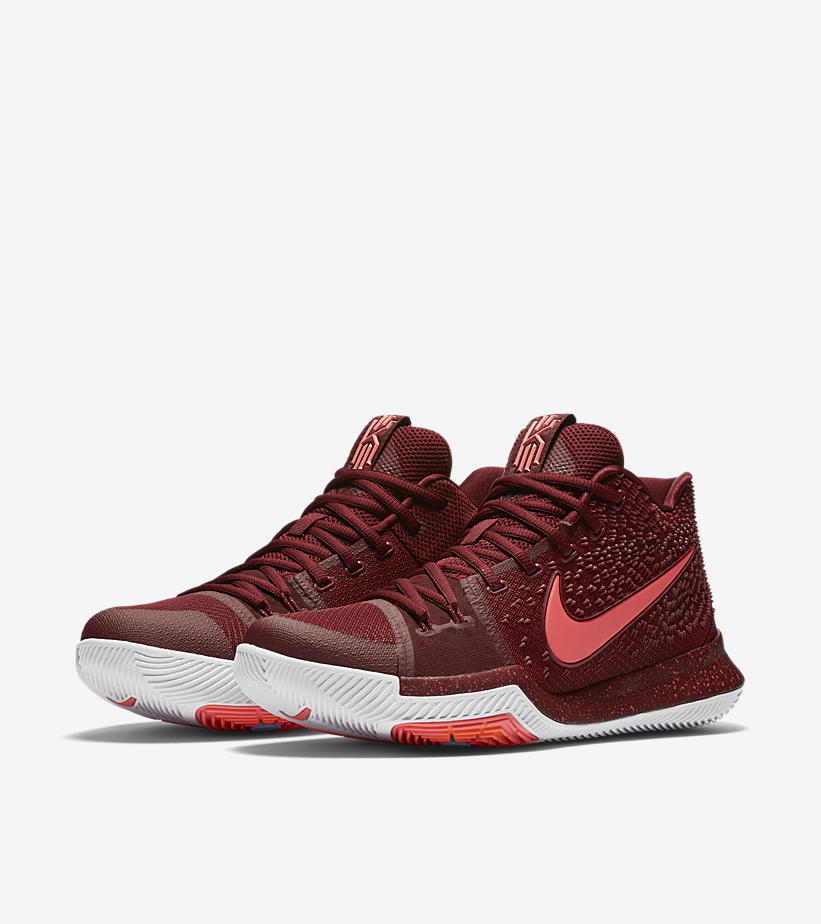 The Black Ice kyrie 3 was the first colorway of the Kyrie Season 3 to drop; Nike sportswear is launching a new one on Saturday January 7: the Nike kyrie 3 Warning Team Red. I don’t know if any of you watched my earlier breakdown of the kyrie 3 ; if you didn’t, check out the video below

The shoe feature a red upper with pink highlights on the outsole and the side panels swoosh logo. From the midfoot to the heel counter, you can recognize some elements of the kyrie 1; also present is a subtle band adjacent to the toe box ( for additional stability). Like I said before the Kyrie 3 seems like a fusion of the Kyrie 1&2. Branding comes in the signature Nike swoosh on the lateral & medial side panels ( in pink); you will also find a debossed “Nike” text on the heel. Kyrie’s own logo will occupy the outside of the tongue and the outsole; located on the outside of the tongue as well is Kyrie’s motto “JBY” ( Just Be You).

The shoes feature a combination of hyperfuse, flyweave and mesh ( each intended for durability, natural motion and ventilation purposes). Kyrie has sustained a fair amount of injuries ( to the point where many thought he was too brittle); guys like him are injury prone because their game is based on speed, change of directions, slashing and attacking the rim. The shoes were engineered to provide stability, ankle support and to also facilitate natural motion. They have an incredible court feel due to the very responsive thin phylon midsole ( with built in air units at the heel). Here is my full breakdown of the Kyrie 3 black ice for further details.