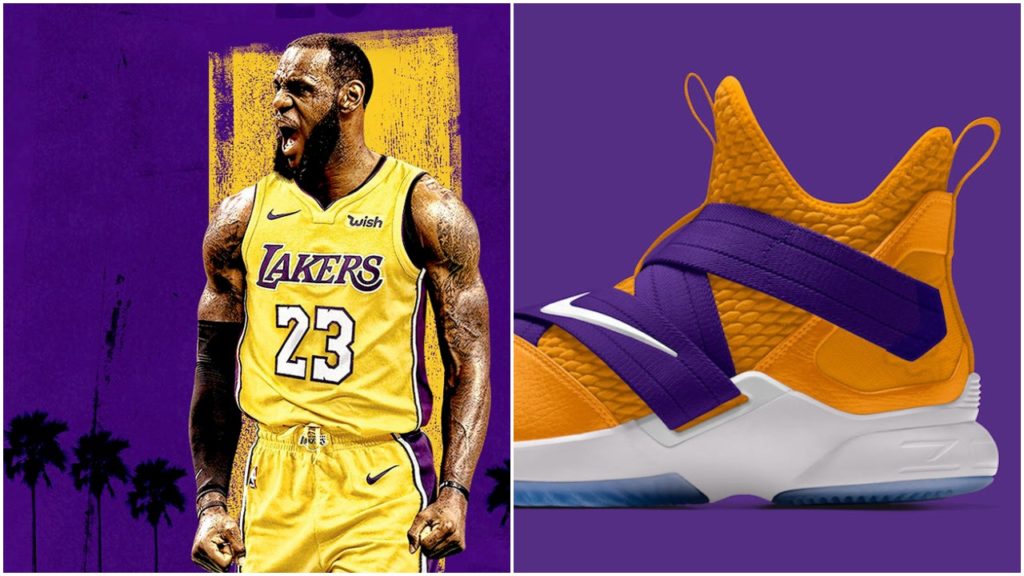 We all know by now that the self proclaimed King James has joined the Lakers; some may not see it as a Sucker move but it is one. Lebron is the biggest opportunist  the NBA has ever seen; why am I saying that? just take  a look at the Lakers’s roster and you’ll understand. The team is loaded with brewing future all stars that have demonstrated their ability to put the orange ball in the basket. Lebron knew that there was no way his motley crew in Cleveland could get him back to the Finals in the upcoming season, the same way  years ago he saw his window closing with the Heat- that’s the reason why I call him an opportunist. Anyway I’ll save the basketball talk for another post; as everyone was yapping about Lebron and the Lakers, I took to eBay to investigate the status of Lakers’s gear and sure enough King James Lakers’ jersey was selling like pancakes from IHop, see pic below

But what I’m more intrigued about is what is going to happen to the Nike Lebron Signature shoes. The lebron’s have picked up in momentum last season a little before the playoffs when Nike started dropping the shoes during the course of each game he played. That seemed to have helped the sales and a quick look on eBay shows that the Lebron 15 isn’t doing too bad ( they have sustained their worth to some extent). I’m not going to take a look at each of the Lebron 15 colorway but their current market value is between $135 and $200+ depending on the exclusivity of the style. If the shoes are performing this well while he is in Cleveland, what do you think will happen when he goes to a big city like LA. We are talking about the “Showtime Lakers” and all that comes with it. I wonder if Nike was behind this move and even if the brand isn’t behind it, the execs are probably rubbing their hands as I type this. Lakers’s fans have more than just local fans, they have a mass appeal that overflows onto the international market, especially in China. Kobe is revered in Asia and Lebron is still in his prime now so this like a marriage made in heaven. The Lakers have been a below .500 team for several years now and King James joining them is like a savior has come into town. Think not only in terms of how his shoes are going to be flying off shelves ( the lakers fans love their team passionately) but also consider the countless narratives at Nike’s disposal right now and the implications. Every Lebron’s sneaker that Nike is going to release in the next few months will be an instant sell out. That’s why I said that King James’s signature shoes are in even better shape now; Nike literally has every single weapon in its arsenal to make Lebron’s GREAT AGAIN-the fans ( local and international which means more sales), Staples Center (iconic arena), the Savior ( Lebron James), Coverage ( we’ll all be tuned in to watch his highlights), Narratives ( countless), Lakers Colors ( Burgundy, Gold). All that the consumers are waiting for are the shoes.

How Will Lebron James Fit In The Sixers’s System If He Joins The Team?

img via NBA and SBD