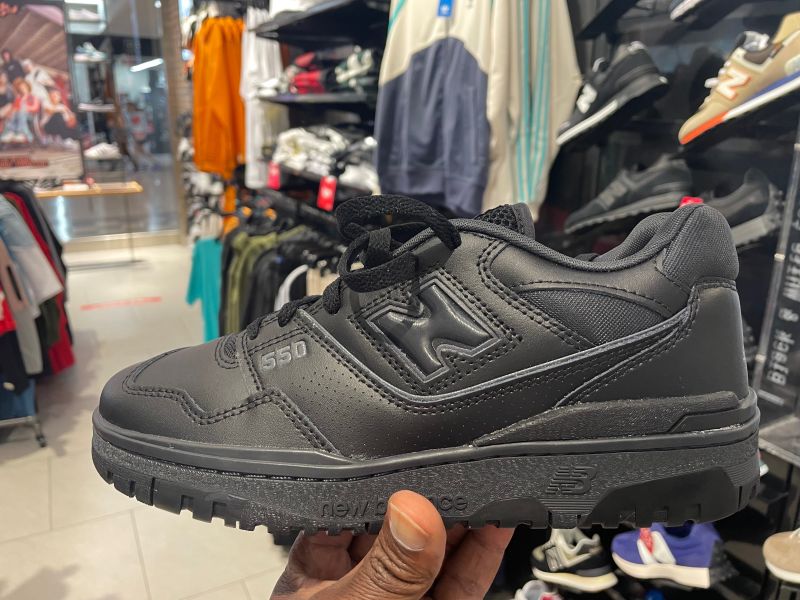 I was on an unplanned visit to my local mall when I came across the triple black new balance 550. I wasn’t surprised to find it on the shelves, but was more surprised by how much I liked the shoe. The 550 is a classic sneaker, and its inception dates back to the late 1980s.In recent years, the sneaker has been revived thanks to a collaboration with designer Teddy Santis.

The NB 550 first hit the market in 1989 and was created by Steven Smith. It was designed as a high-performance basketball shoe but hardly gained in any popularity because it was overshadowed by more popular early 90’s sneakers i.e. Jordan and Nike signature shoes, the Reebok Pumps, the adidas Forums.

The 550s were eventually  discontinued. However, they made a come back ever since New Balance collaborated with designer Teddy Santis to create an updated version of the silhouette. The new model, which was released under Santis’ label Aime Leon Dore, featured a higher quality leather upper and a unique colorway. The sneakers were an instant hit with sneakerheads and sold out within hours of their release. Ever since then, folks have been gravitating toward the 550 and rightfully so, folks have been  drawn to their clean lines of the shoe and minimalist design. Here’s A quick look at the triple black colorway I came across, see video below.

How I Found the Triple Black New Balance 550s

When I first laid my eyes on the shoe, I was impressed with its aesthetic. It certainly looks like one that was pulled out of a storage unit that dates to the early 90’s, certainly reminiscent of a vintage sneaker. The uppers are made of a thin layer of actual leather coated by a dense layer of synthetic leather, that might be a downer for some, but it takes nothing away from its quality. What I wasn’t expecting was for the shoe to be this comfortable. The comfort level is off the chart as the shoe features not only a insole but also a fiber board on top of a dense layer of foam on them midsole to deliver maximum cushioning.

The perforations on the panels and toe have no real depth and are not really conducive of a lot of air so ventilation might be subpar on them. The threads are deep and won’t wear out. Overall, I was very pleased with the shoe and would recommend it to anyone looking for a comfortable, stylish sneaker.

If you’re interested in picking up a pair, refer to the details below

Where To Buy The New Balance 550 Triple Black