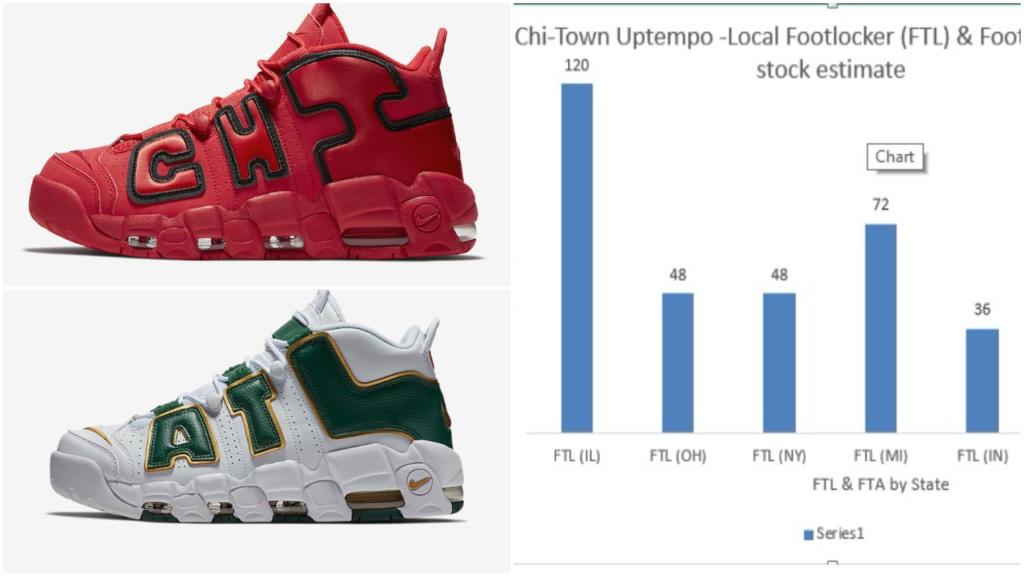 The Nike Air More Uptempo erupted like a volcano this year when Nike decided to treat the shoe like the Air Force 1 and release so many pointless colorways. It eventually led many folks to develop a disdain towards the sneakers . The uptempo was a classic shoe of the 90´s that carried a lot of warm memories; after bringing back the original colorways, Nike should’ve put the shoe back in the vault. What the brand did was ill advised and the consequences are disastrous.I️ think the city inspired models are Nike’s subtle way of repainting the image of the uptempo but it may be too late. The histogram below will give you a rough estimate of how many pairs were produced. I’ll give you my own brief interpretation of the chart.

The histogram below is for the Chi-town Air more uptempo This data is only for local Footlocker and Footaction stores ( I did not take into consideration their online stores so be mindful of that). According to the Footlocker release map, only ten stores in Illinois are going to get the shoes; if each store is only getting 12 pairs, multiply the number of allocated by ten to get a rough estimate, hence the 120 pairs you see on the chart above. Now that you understand how I came up with the numbers, you can easily interpret the histogram above. So if you add all the number of pairs per location, it comes up to 396 pairs ( locally).

The next histogram is for the ATL edition, which is actually more limited than I thought. Based on the histogram you can clearly see that only 216 pairs of the ATL Uptempos will be available based on my estimate. I may not be totally accurate but one thing is for certain, the shoes are darn limited.

And their current market value on eBay is another supporting evidence. As a matter of fact i’ll show you a quick screen shot of the current selling price of both models.

Here is my conclusion, the damage is already done. The evidence is right before your very eyes. Only two pairs of the Chi-town edition have been sold and none of the ATL uptempo has sold yet on eBay. For a very limited shoe , this isn’t very typical. the verdict is very simple, Nike has KILLED THE UPTEMPO. Maybe I’m wrong and the shoes are going to start selling well but the numbers I gathered haven’t lied.

For those interested in buying the shoes, refer to the listings below or you can buy both styles on eBay , see listings below