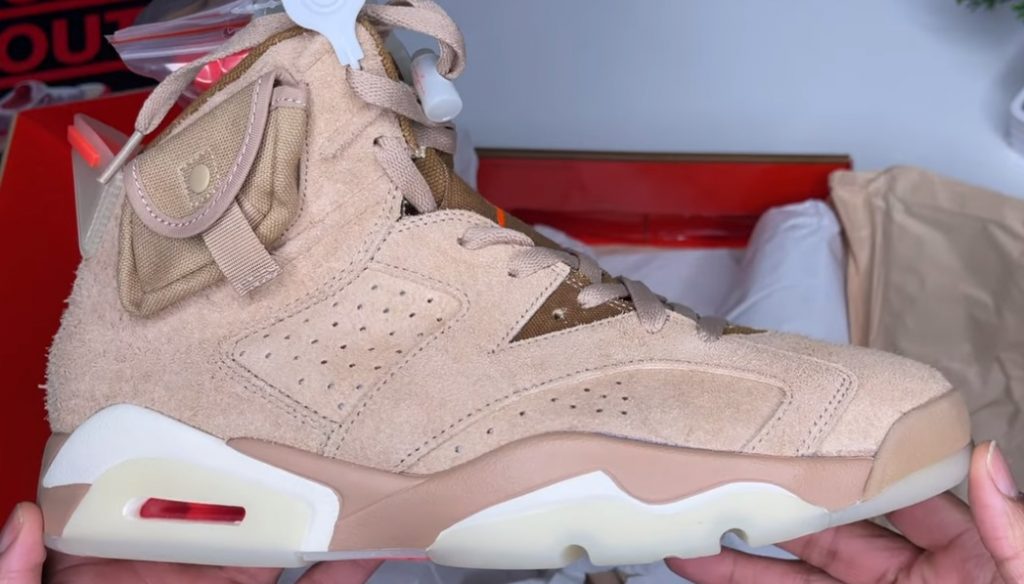 If you’re a sneakerhead, then you  know how hard it is to get your hands on a pair of Jordan X Travis Scott Sneakers. With their limited release, and high demand, most folks are likely left empty-handed when trying to score a pair. As a result, an increasing number of people in the sneaker community have resolved to exclusively buy what they now refer to as Option B sneakers. Option B sneakers are essentially high-quality “undetectable to the naked eye” knockoffs that are 98.9% identical to the real thing. You can see how difficult it is for me to come up with a suitable description for these shoes. I recently came across a pair of Fake Air Jordan 6 Travis Scott British Khaki that I’ll refer to as the ultimate Option B sneaker. The Legit Check page is one of the most popular sections of my website. I’ve dedicated the entire page to assisting folks in distinguishing between real and fake sneakers. But every now and then, I come across a pair of sneakers for which my many years of authentication knowledge are rendered useless, in the sense that I am unable to detect any problems in the fakes. Before 2021, I had only seen this issue twice or three times, but it has now been a persistent issue with numerous fakes on the market. This is happening more frequently for a reason. Replica manufactures have been very proficient at improving their products. Several batches are released for testing, and when flaws are discovered, they are quickly upgraded. As a result, counterfeiters rely significantly on people like me to make modifications to their fakes. They view our legitimate check videos and then return to the lab to correct the issues we mention. And, over time, they correct the typical errors, and the results are right in front of our eyes: near-perfect fakes are released. This is the case with this Travis Scott Replica Jordan 6.

A common problem with most Jordan 6’s was the heel counter, the tab, the perforations, the pockets, the air unit and the toe box. But with the shoe in the video above, all those things were completely fixed. I will explain. 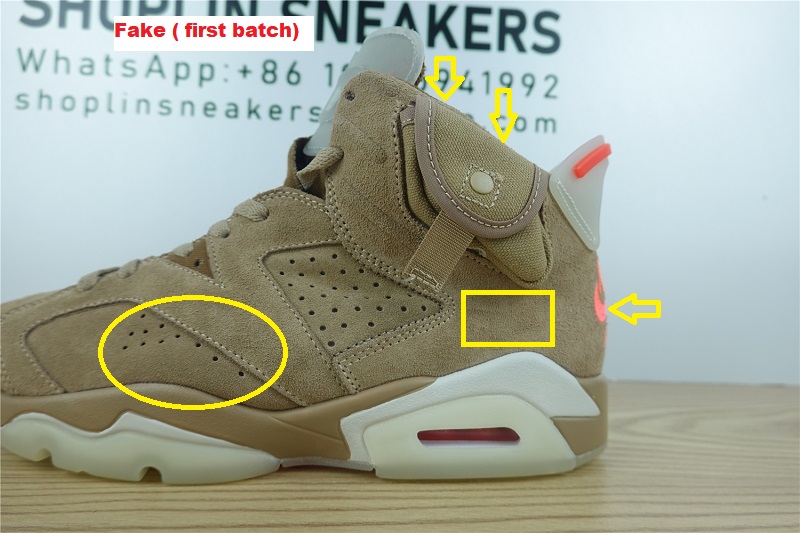 The image above is from the first batch of fakes produced. There many easily detectable flaws on it. There is supposed to be a contrast between the suede used on the overlays and the one used on the underlays. The overlays on the real pair are more hairy, but there is no such contrast on the pair above. Furthermore, the heel liner on the pair above is scarcely visible ( see yellow arrows pointing down). The forefoot perforations are wrong, and the heel counter is somewhat too sharp. All of these problems were fixed on the Fake pair seen in the video I shared.

The fake air Jordan 6 Travis Scott British khaki is as good as the authentic pair for a number of reasons. First, the uppers color materials are consistent with the authentic pair. Second, the perforations are at the right place. Third, the packaging is on point, and even includes a dust bag. Fourth, the box has the correct code, correct label and the sole glows in the dark. Finally, the air chamber is correct. In other words, if you’re looking for a pair of fake air Jordan’s that look indistinguishable from the real thing, this pair is a great alternative. Now he didn’t do submit the shoe to the black light to see if there are any dotted lines. But  I can guarantee you that many won’t hesitate to pull the trigger on them. .  Just read the comments section in the video and you’ll see.

I’m curious how many people in the sneaker scene have been duped into paying a ridiculous amount of money for a replica pair. And the remark I just made is for good reason. A so called “expert” eBay authenticator was conduction a routine inspection of a sneaker that I would  consider subpar. I actually wrote an entire post about it, see link below.

With this type of below standard authentication, I wonder how many pairs are slipping through the cracks. It’s one thing to buy a pair of fakes knowing they’re fakes, but it’s quite another to spend a hefty sum for a pair you believe is genuine.

There are a several reasons why people might choose to buy fake Jordans rather than authentic ones. The main one  is that the fake ones are just as good in terms of quality and much  usually cheaper. And these days, people even authenticators are not be able to tell the difference between a fake and an authentic Jordan. Whatever the reason, there is a market for fake Jordans and people will continue to buy them as long as they remain readily available.