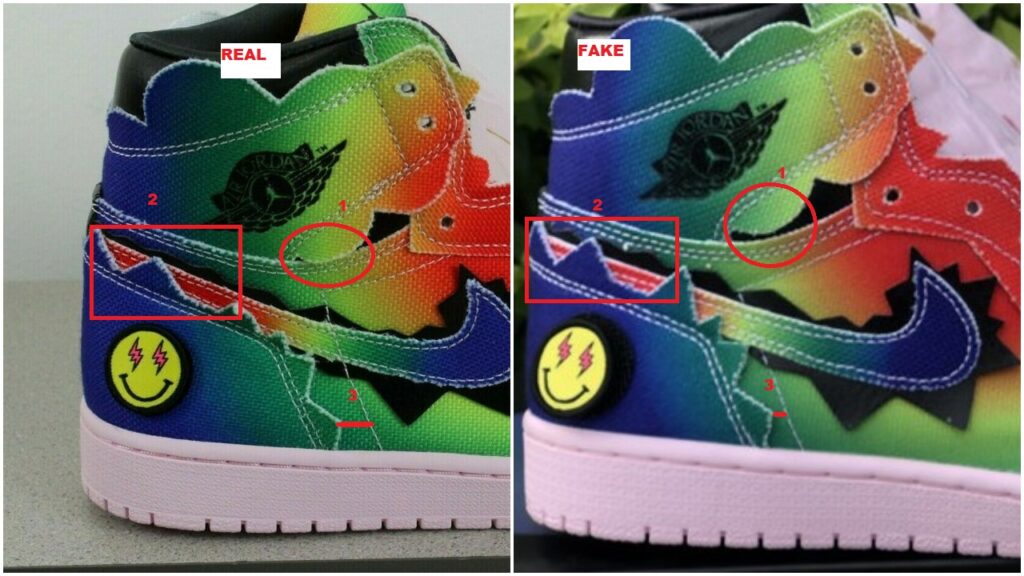 I attempted to write a post about identifying the Fake J Balvin Air Jordan 1 High a few weeks ago but I quickly stopped. Reason being  I didn’t have access to pictures of legitimate pairs for a side by side. I searched everywhere but the pictures I was coming across weren’t convincing. Finally I was able to fetch some within the last 48 hours and hopefully this will be helpful to you. First let’s set up our preliminary steps:

The fake pair in the picture above is an updated version, you’ll see the first batch in later pictures. 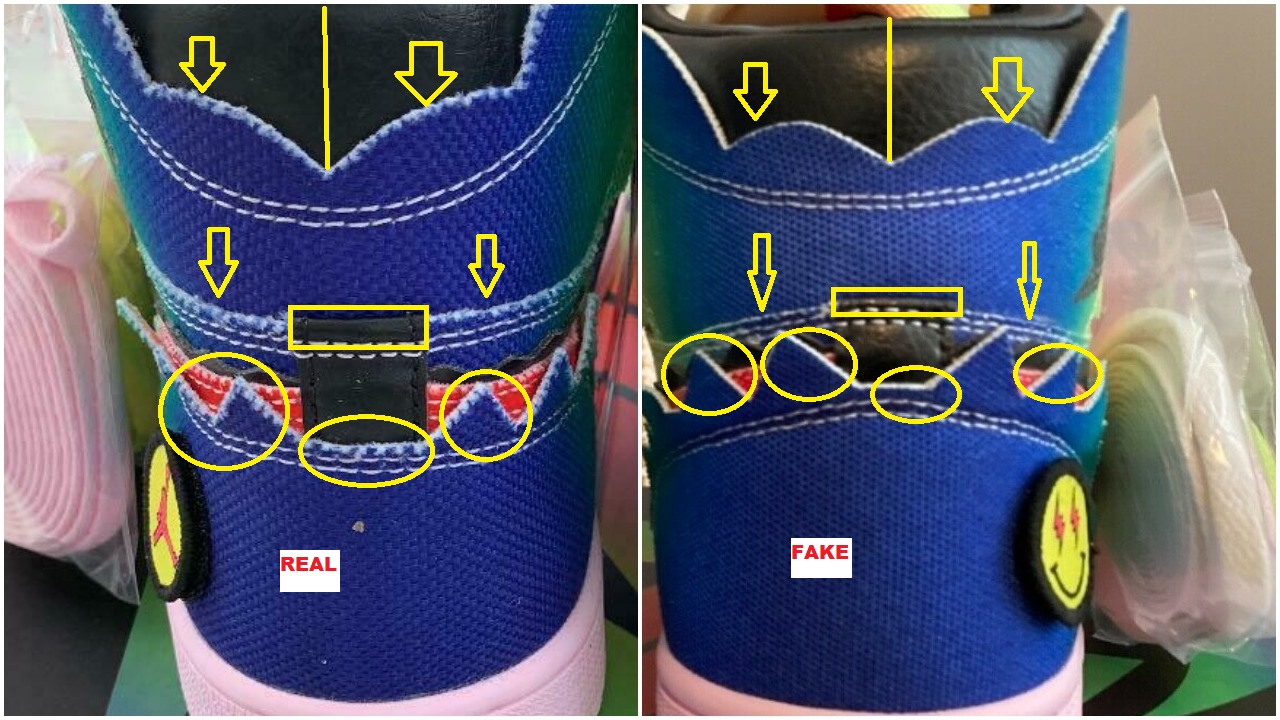 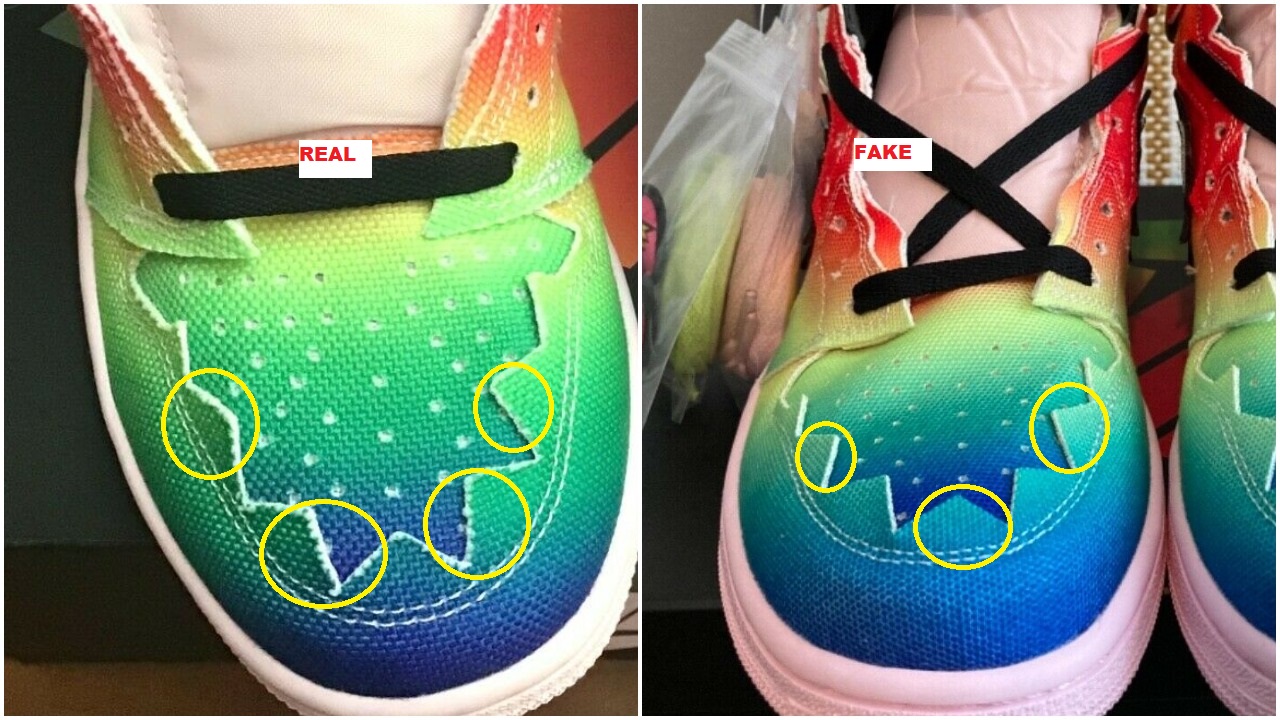 Again zero in on the yellow circles to see the see the fringes around the edges of the real pair.

I was telling you that the pictures above were of an upgraded version of the fakes. The next set of side by side will show you the first version of fakes that surfaced. 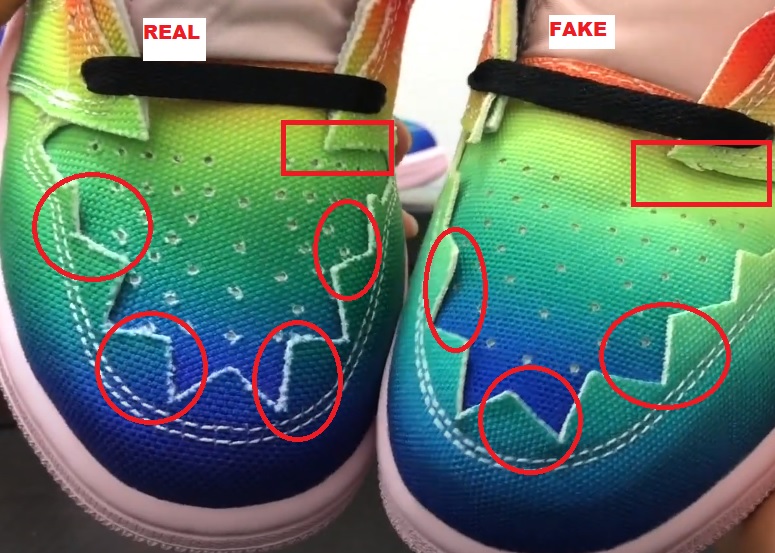 I fetched the picture from  a comparison I watched on youtube via Trutru vs Fufu. Again you can see how smooth the edges of the fake pair is in comparison to the rougher edges on the real pair due to the fringes. You can also see that the cut around the forefoot overlay is not consistent on the fake pair ( see red rectangle). 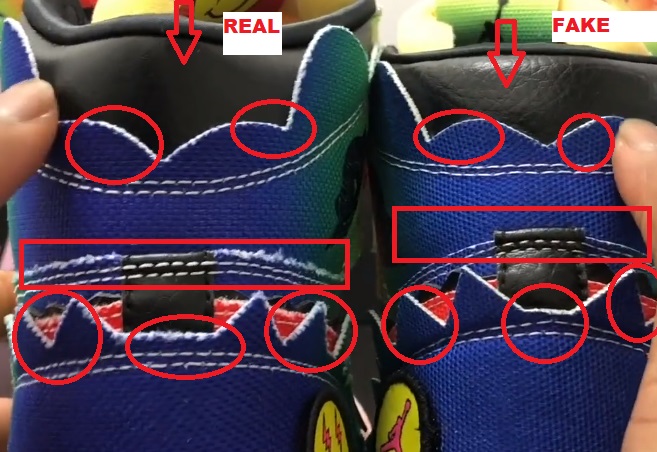 Again more fringes on the authentic pair and you can also see how wrinkly the fake pair’s leather is ( more creases). 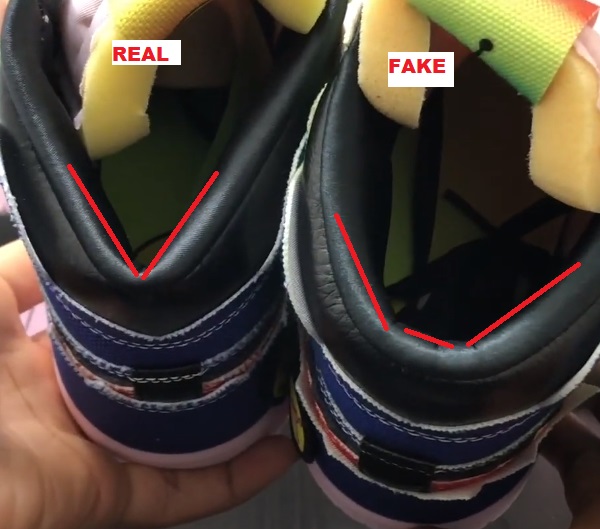 No comment needed here you can see the differences clearly. 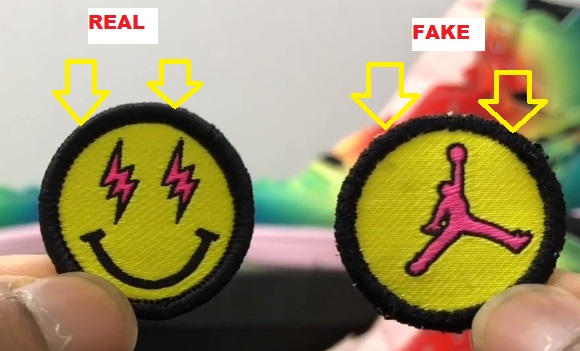 The edges of the patches of the fake pair are rough and uneven, and the jumpman does not look the same ( a lot thinner on the fakes) 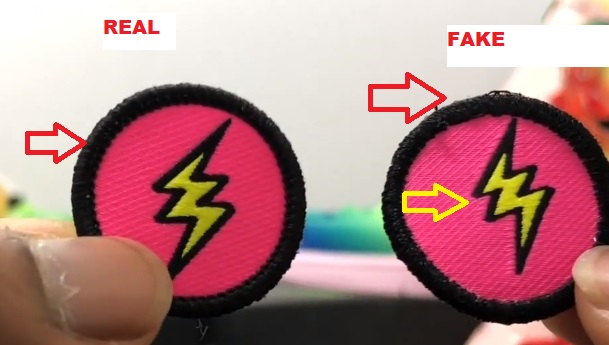 The lightning bolt isn’t properly centered on the fakes. 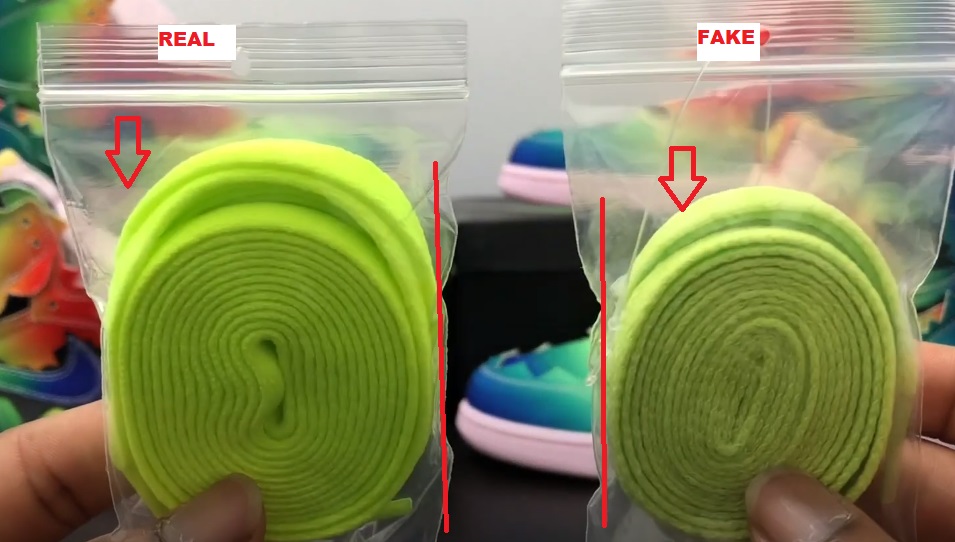 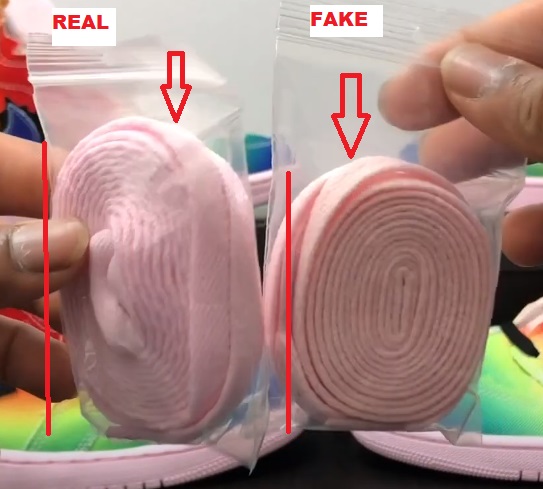 The laces aren’t full or long enough on the fake pair that’s why the real pair’s laces are higher . You’ll also notice the differences in the colors ( darker green and lighter pink on the real pair). 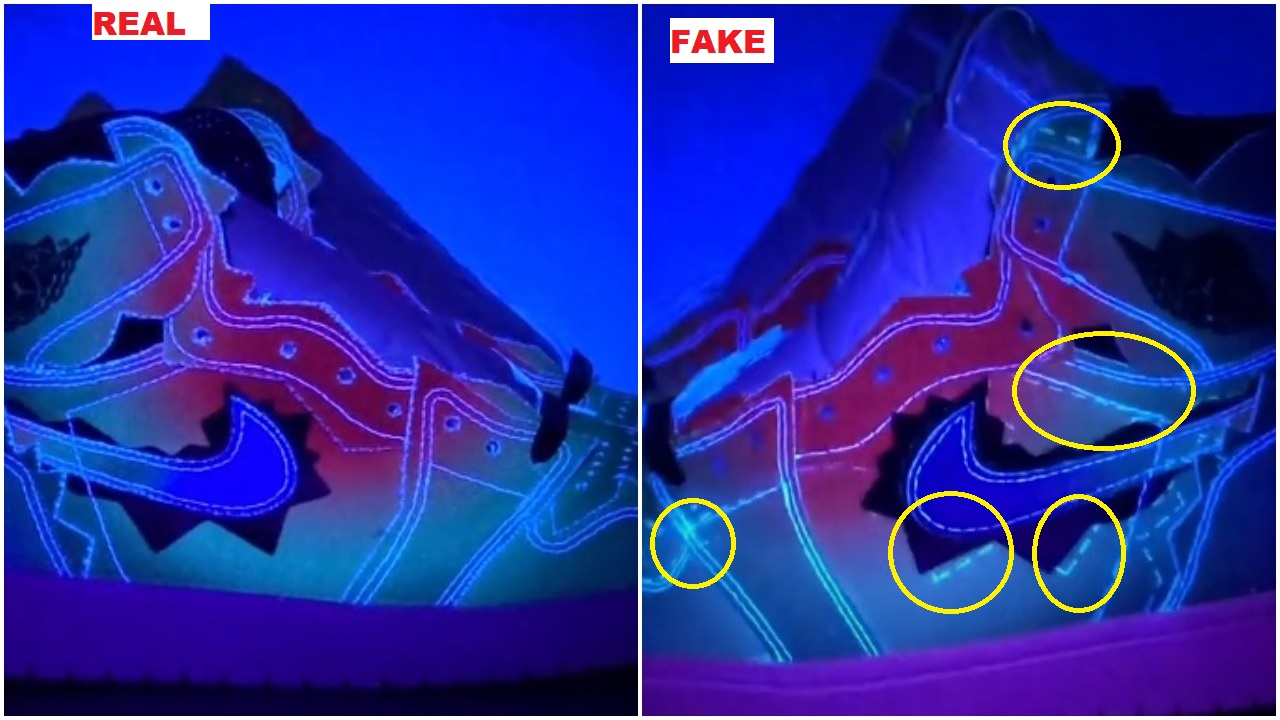 When exposed to the black light, you see how many more dotted lines appear on the fake j balvin air jordan 1. 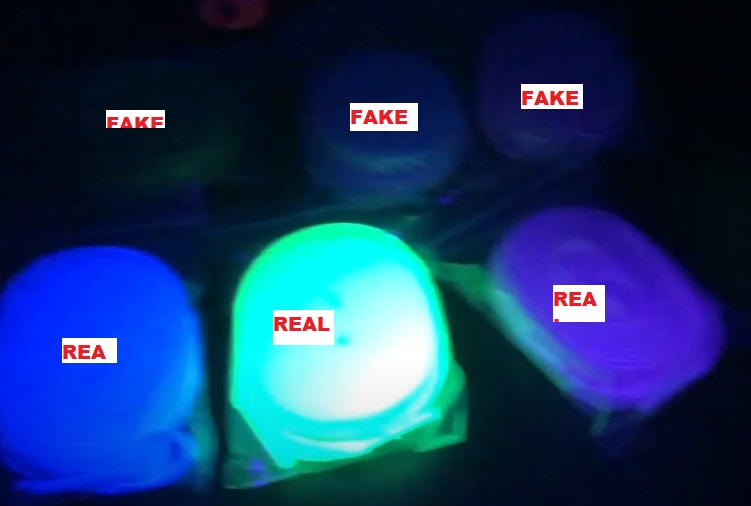 The real pair’s laces glow when submitted to the black light. 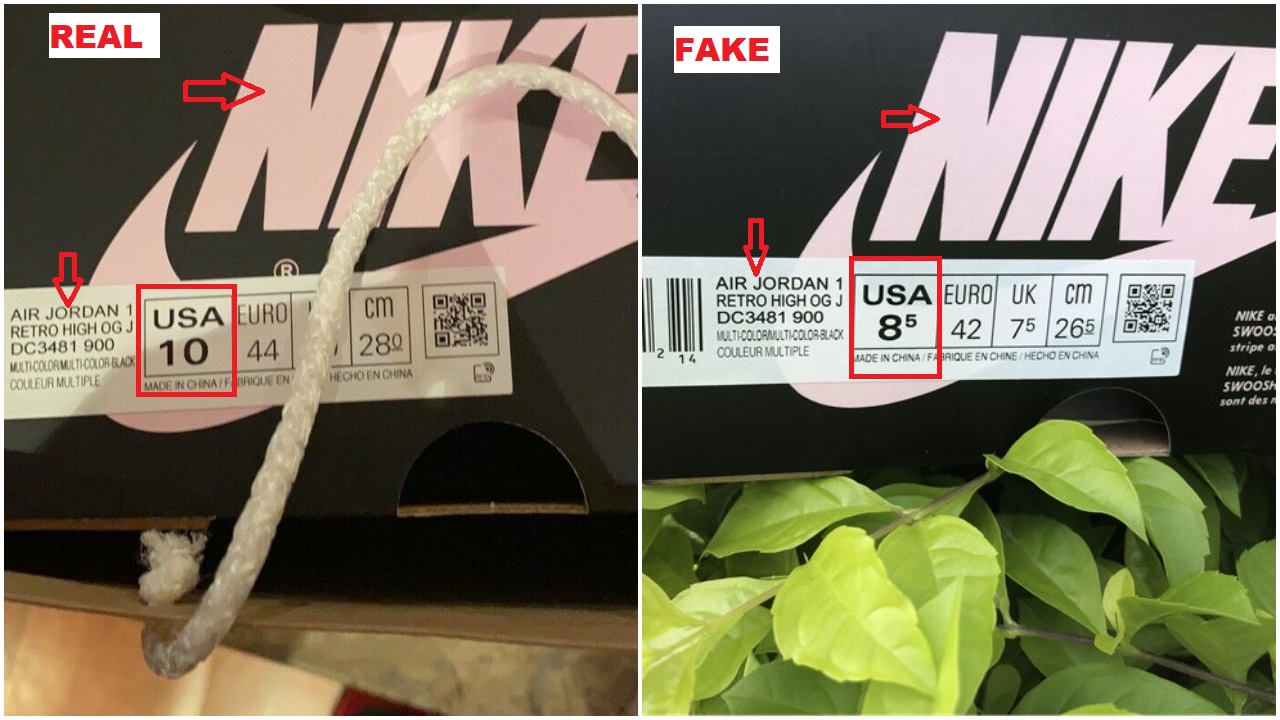 The font is a lot bolder on the fake pair’s label. 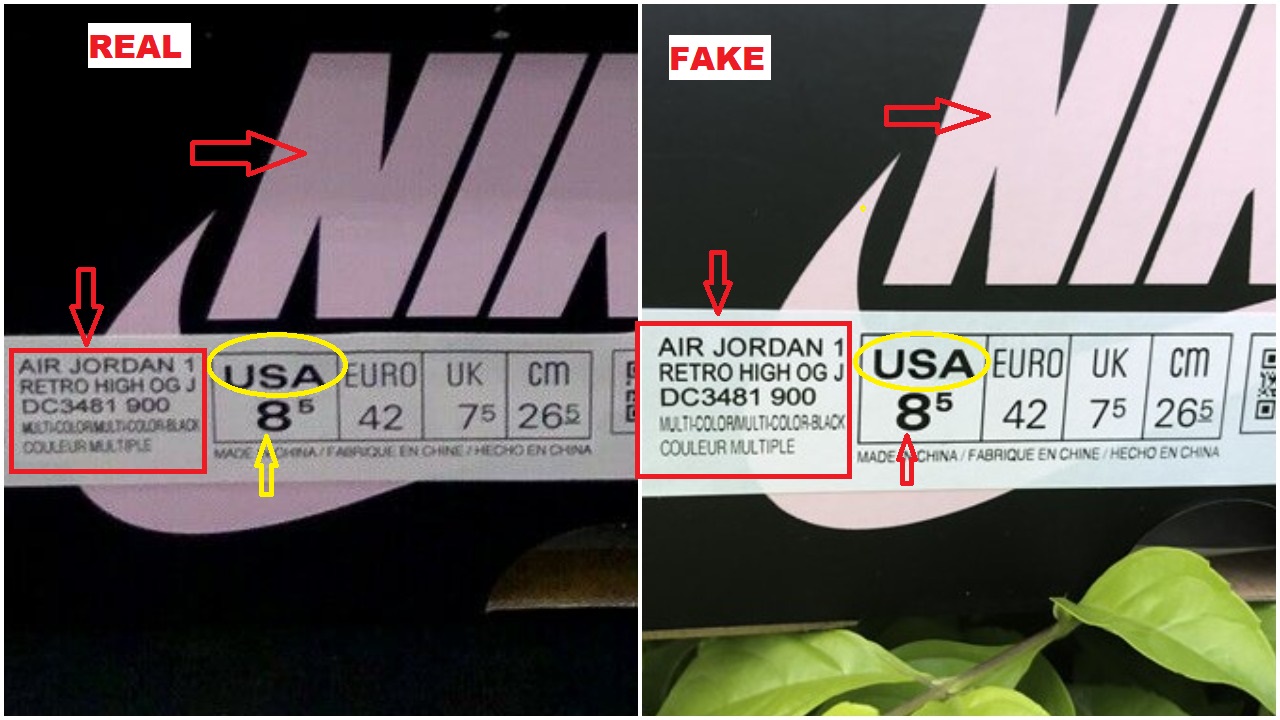 Bolder font on the fake pair.

There you have it folks,  I’ll add more pictures once I get ahold of the shoe.

For other comparisons, visit our legit check page

Where to buy authentic pairs of the Jordan 1 J Balvin

You can buy authentic pairs on eBay from our featured sellers via Authenticity Guaranteed, CLICK HERE