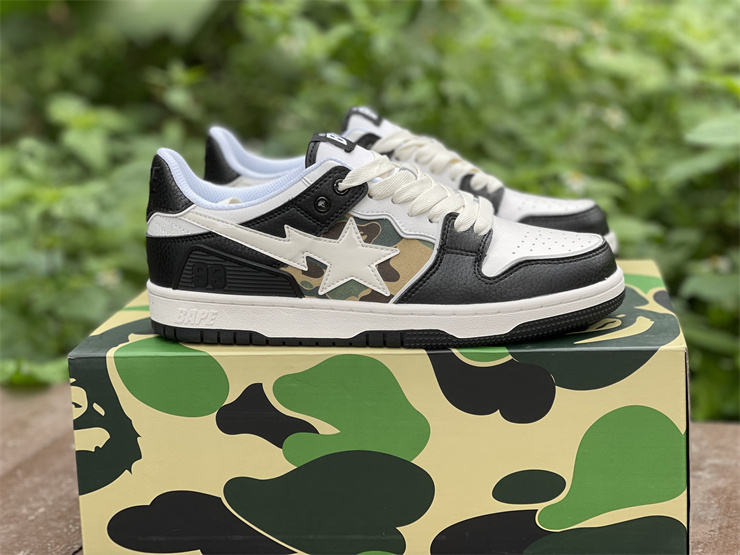 Today, we’re going to be talking all about how to spot and identify the fake Bape Sk8 Sta White Camo Black. Believe it or not, there are many people out there who are trying to sell fakes of this popular shoe, so it’s important that you know how to tell them apart. So, whether you’re just looking for a new pair of kicks or are planning on buying a pair online, read on for all the details you need to know! I usually go through the preliminary steps but this isn’t a pair of Jordan Retro so we’ll bypass that step this time around. 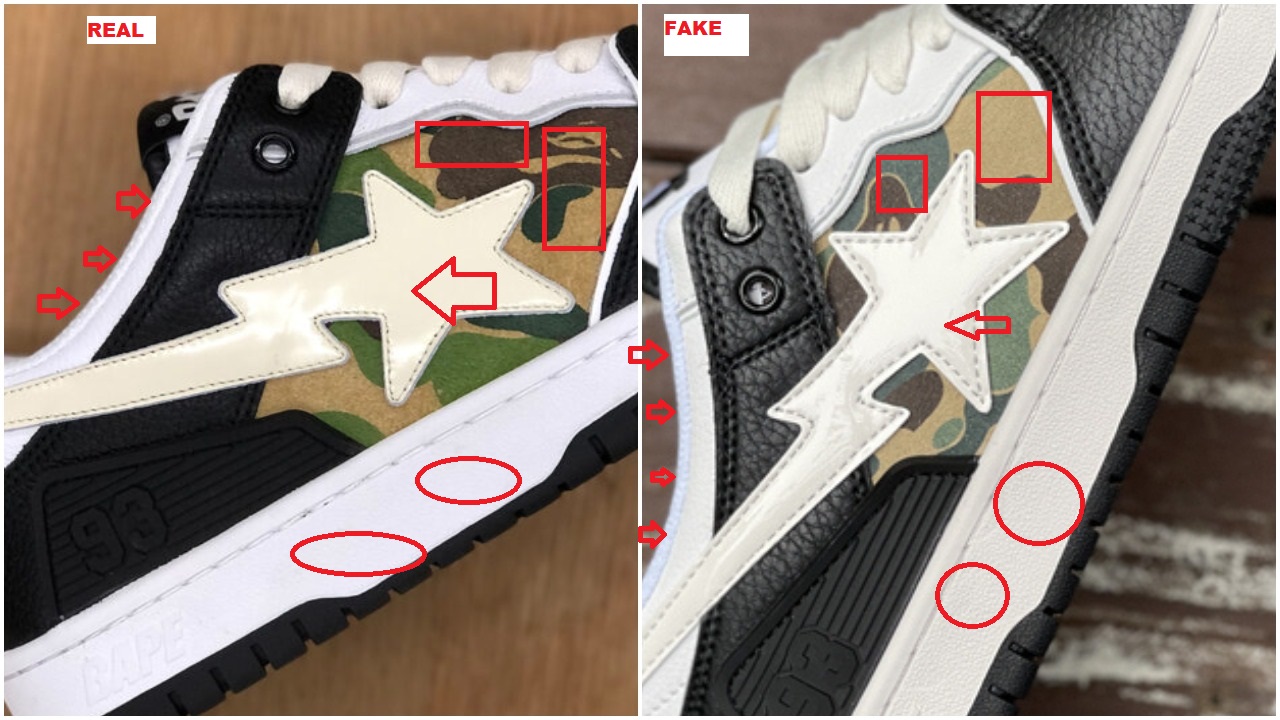 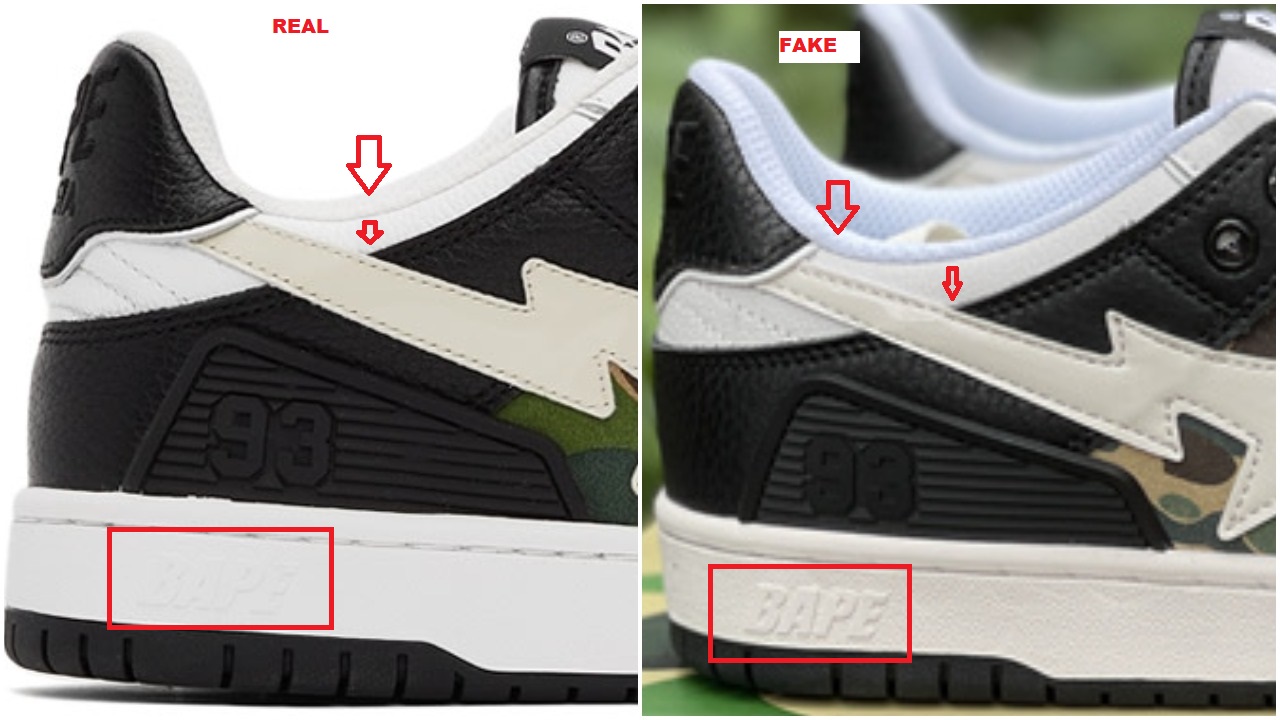 As you can see the distinction between the heel liner shade and the ankle overlay is pretty obvious on the fakes. The ankle is off-white while the liner is snow white on the replica pair. But on the authentic pair, both the liner and ankle overlay are of the same shade of white. Also notice how the midsole is snow white on the real pair ( as a result you can hardly see the Bape text). But on the fake pair, the logo is visible because the midsole is off white. 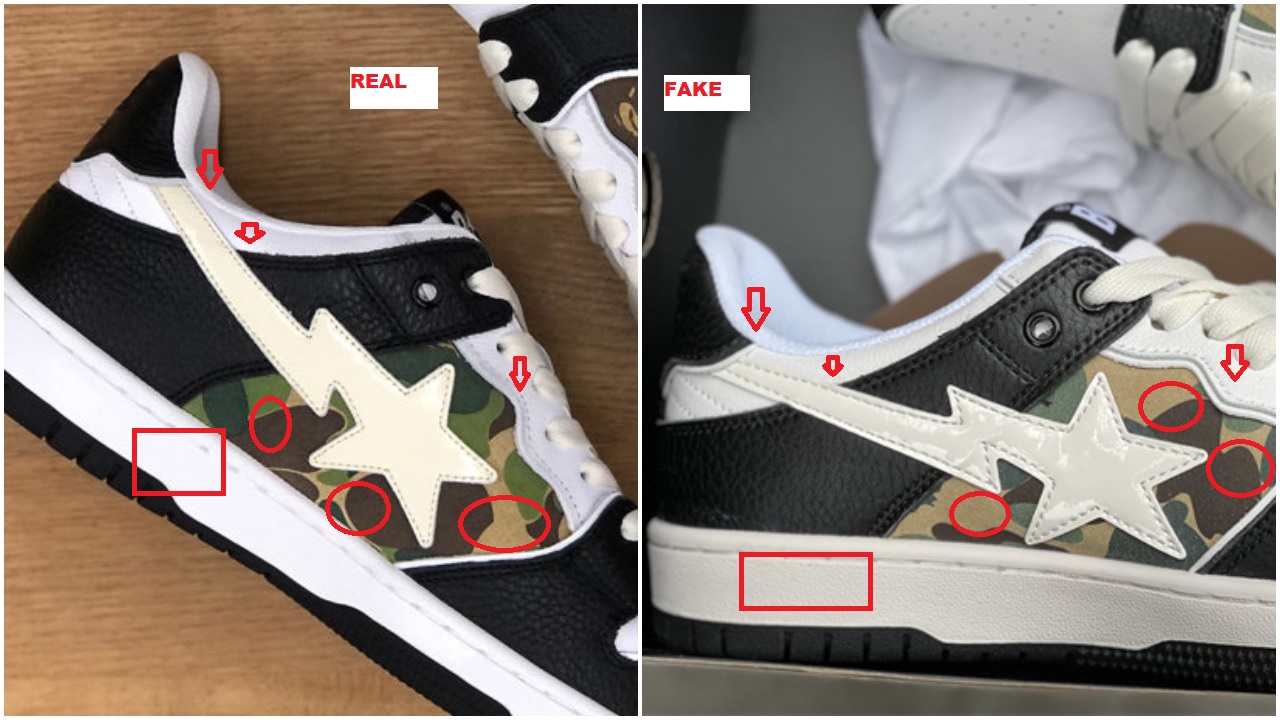 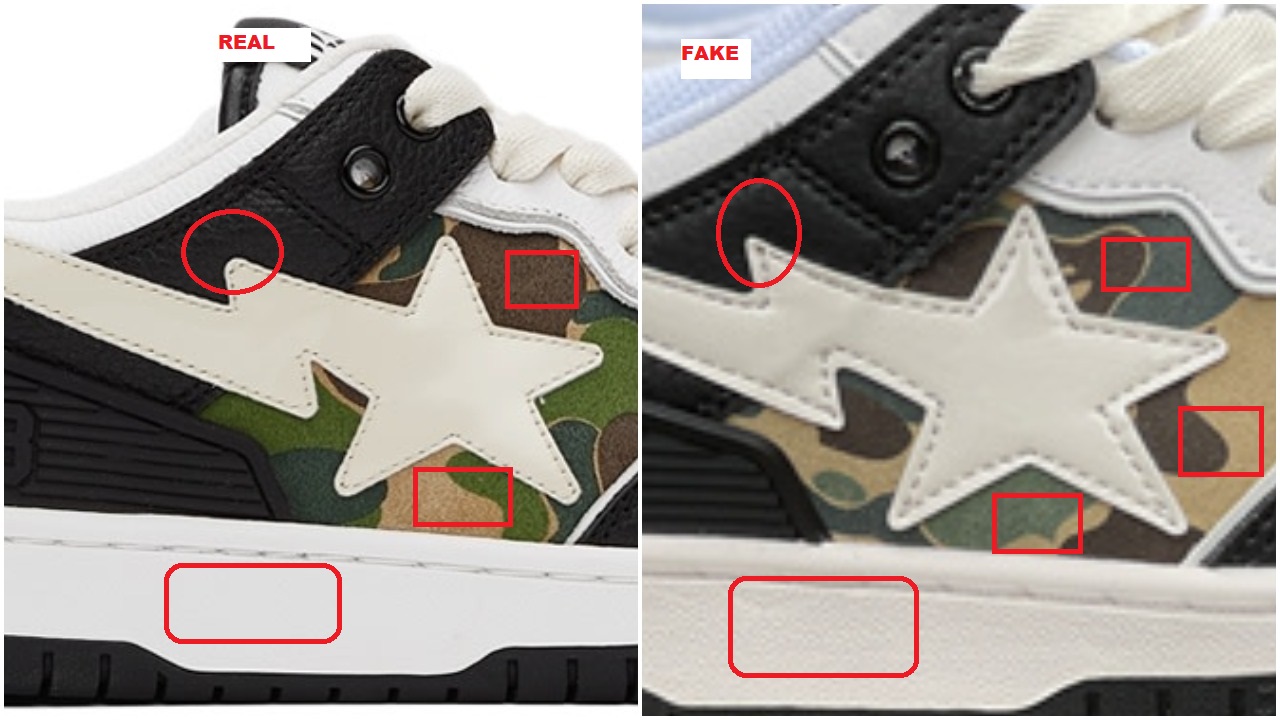 The logo tips are well rounded on the authentic pair but sharper on the fakes, see red circle. And once again pay close attention to the midsole and the mid section camo pattern, you’ll notice the differences. 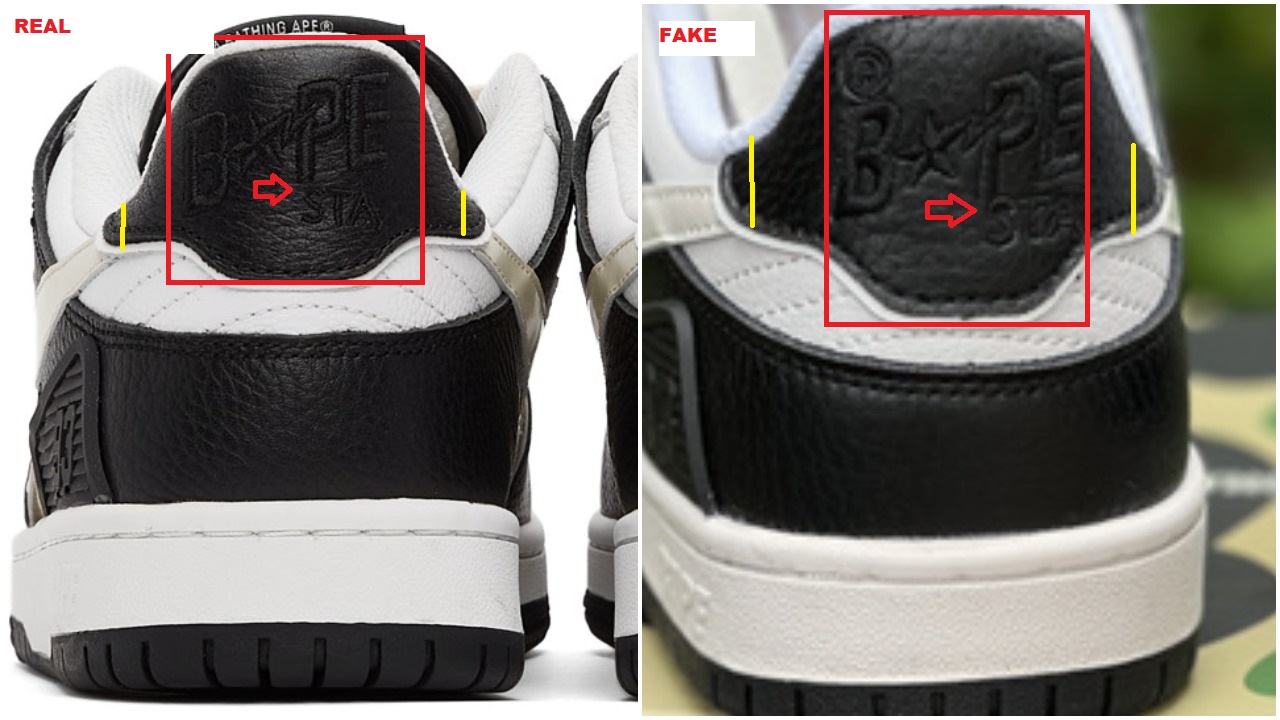 The heel tab is wider and longer on the fake pair, zero in on the square and yellow lines. The red arrow shows you how the “P” and “s” are adjacent on the fake pair but spaced out on the real pair. 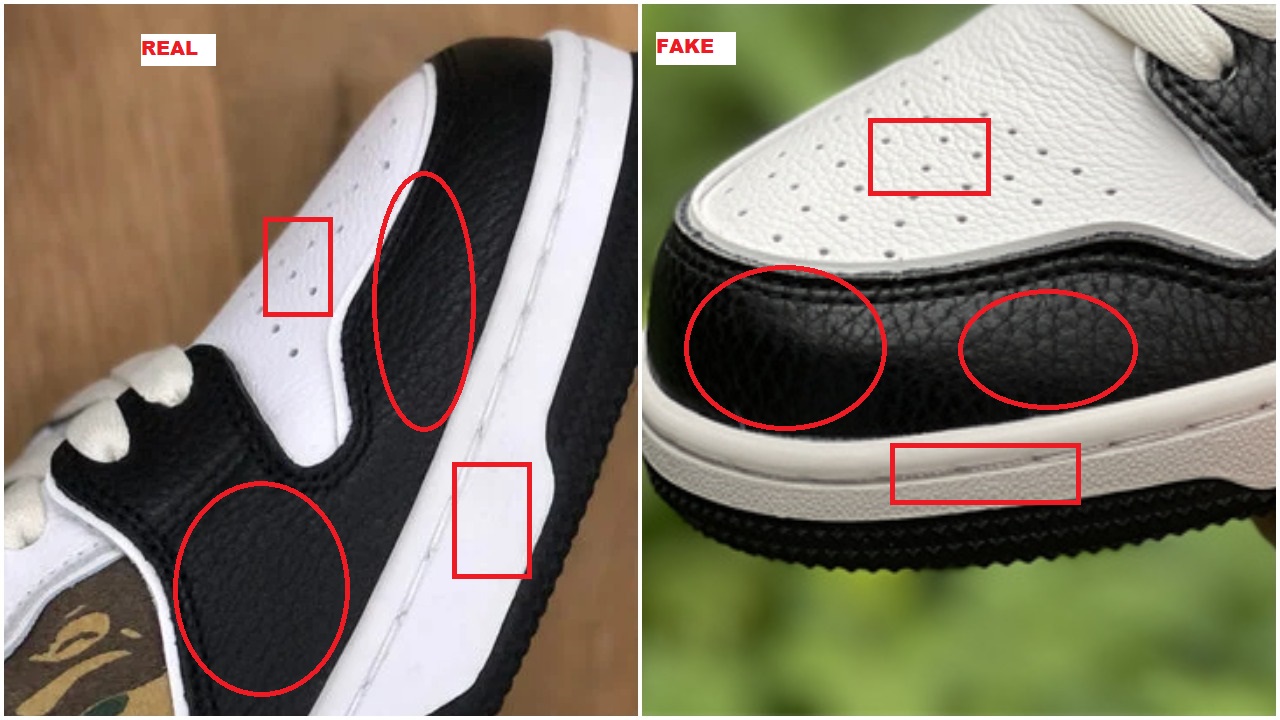 The leather material at the forefoot has more pronounced wrinkles on the fake pair; on the authentic pair, the wrinkles are more subtle.

This is another picture of the Fake Bape Sk8 Sta White Camo Black, it is hard to detect without the backdrop of the legitimate pair, so be very careful when purchasing these online.

There you have it folks, I hope you will be able to legit check the Bape Ske Sta  with these tips. I’ll update the post as soon as I come up with more flaws. In the meantime, do not buy this shoe from anyone unless all things above that I mentioned are cleared.

You can check out our other real vs fake comparisons via the Legit Check page. If you need additional help, feel free to reach out  by emailing me at mistourasal@gmail.com or fill out the form below