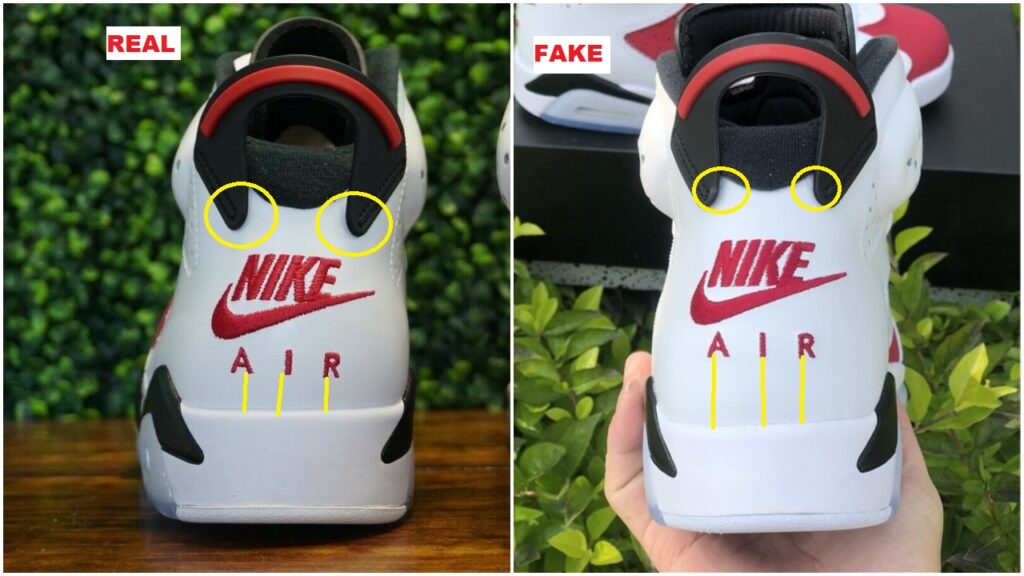 There were no fake air jordan 6 carmine pairs when the shoe released officially a month and some change ago. I was actually surprised that the replica industry hadn’t produced any bootlegs of the shoe. But last week I came across the first batch of fakes and I wanted to quickly show you how to spot it. As usual, it’s always good to go through the preliminary steps. 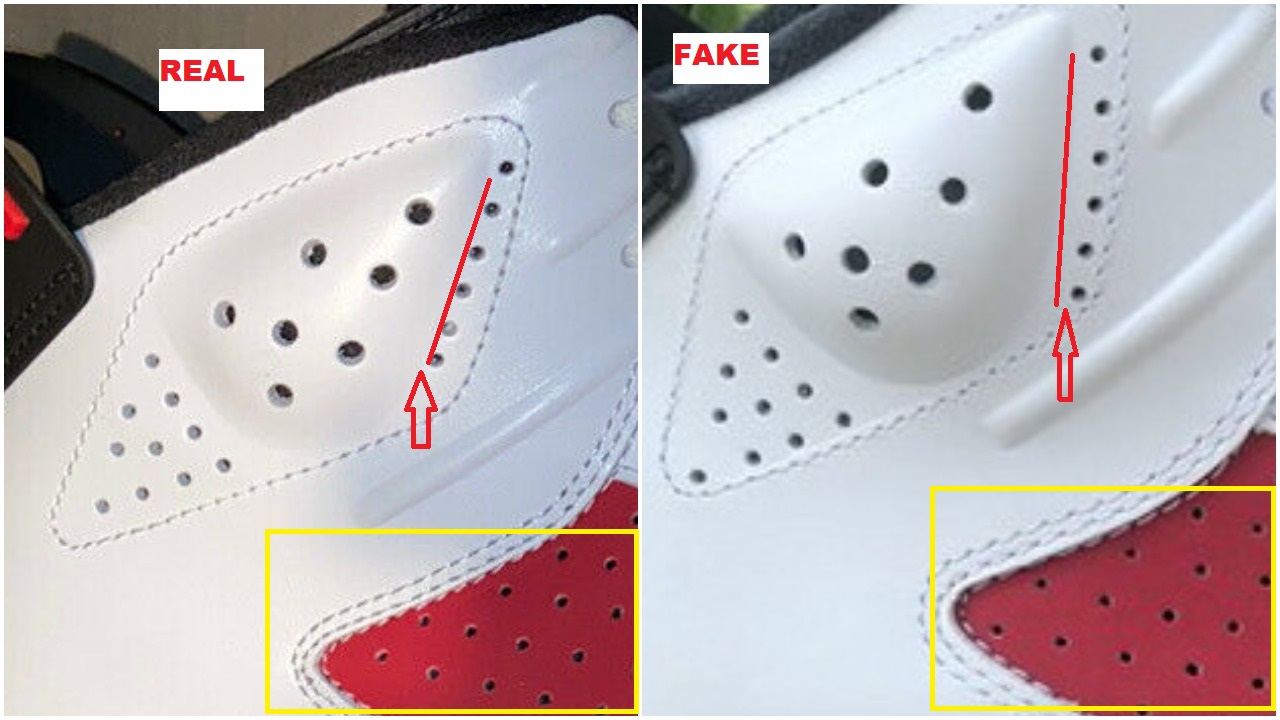 The perforations are supposed to be adjacent to the edge of the pod. But if you zero in on the fake pair, there is an inch and half of space between the holes and the edge of the pod ( see red line and arrow). Also the mid section’s perforations don’t have the same pattern even though both sneakers are size 9’s ( see yellow square). 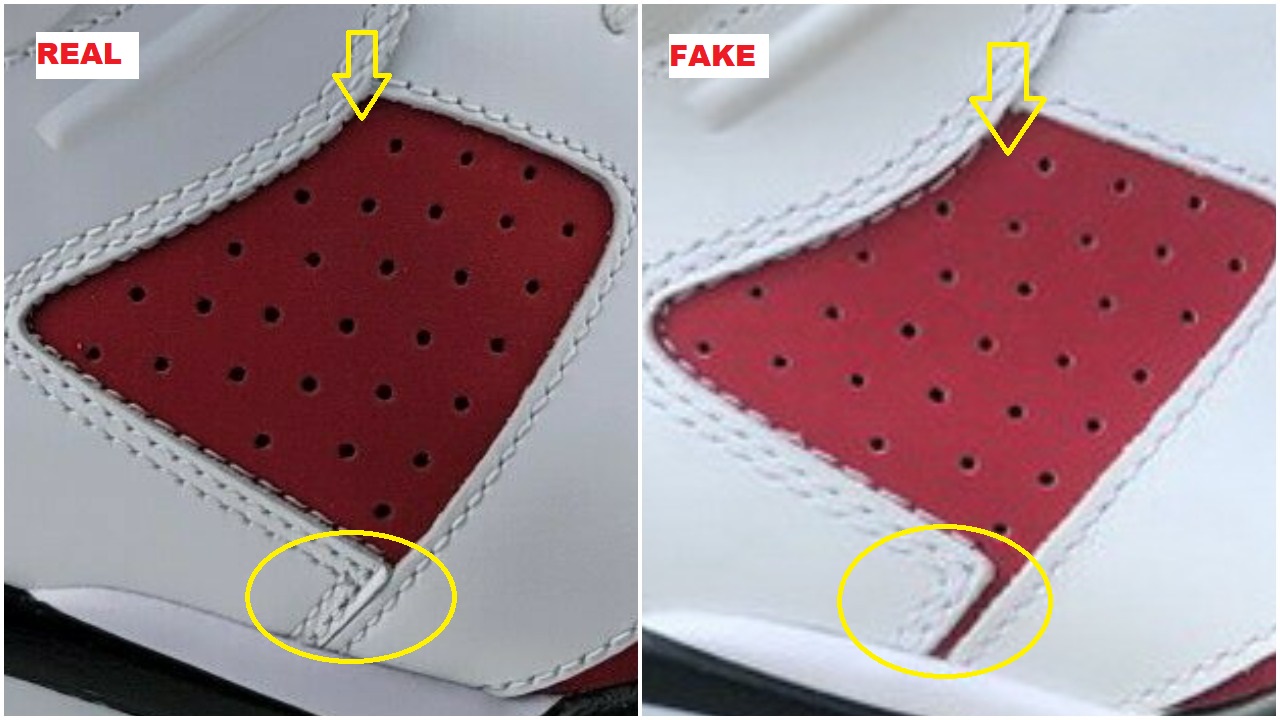 The holes don’t have the same pattern and the size of the holes is slightly bigger on the authentic pair. There is a gap between the edges of the  leather material at the bottom of the mid section of the fake pair ( see yellow circle). 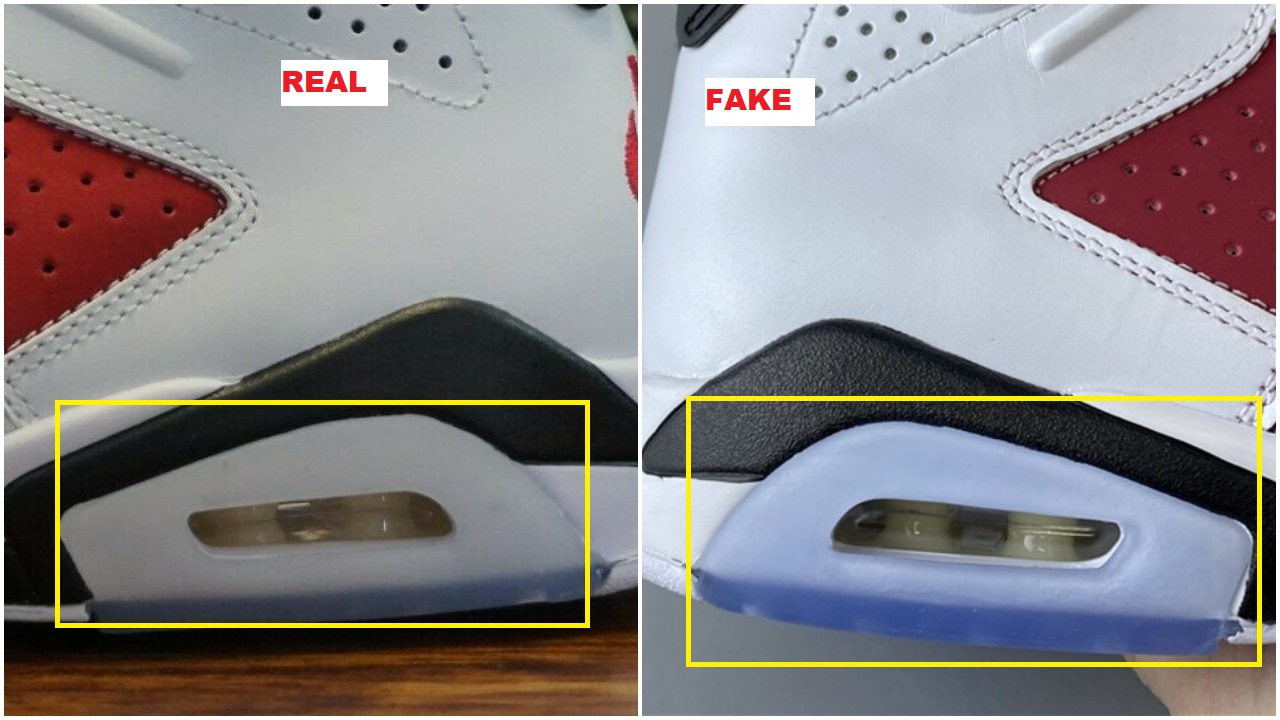 The heel portion of the outsole is blue and purple on the fake pair but on the authentic pair, it is transparent and slightly blue at the bottom. 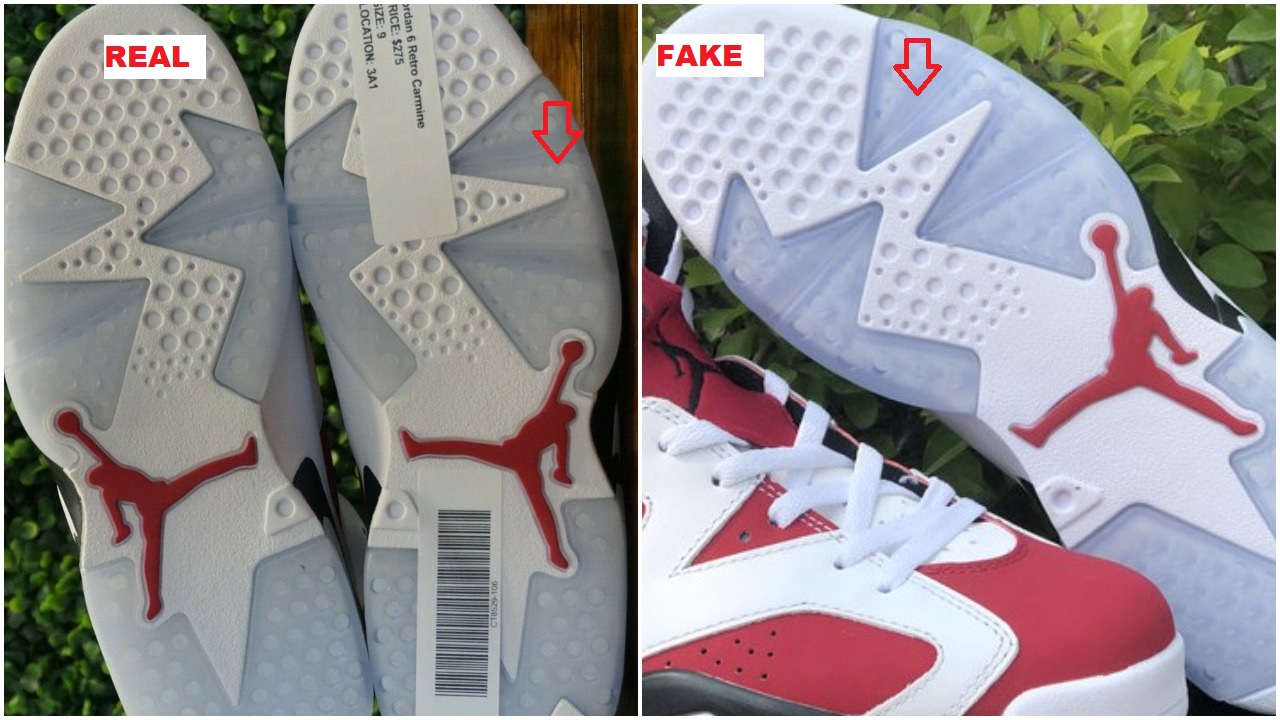 The outsole of the fake pair is of a darker blue, see red arrow. 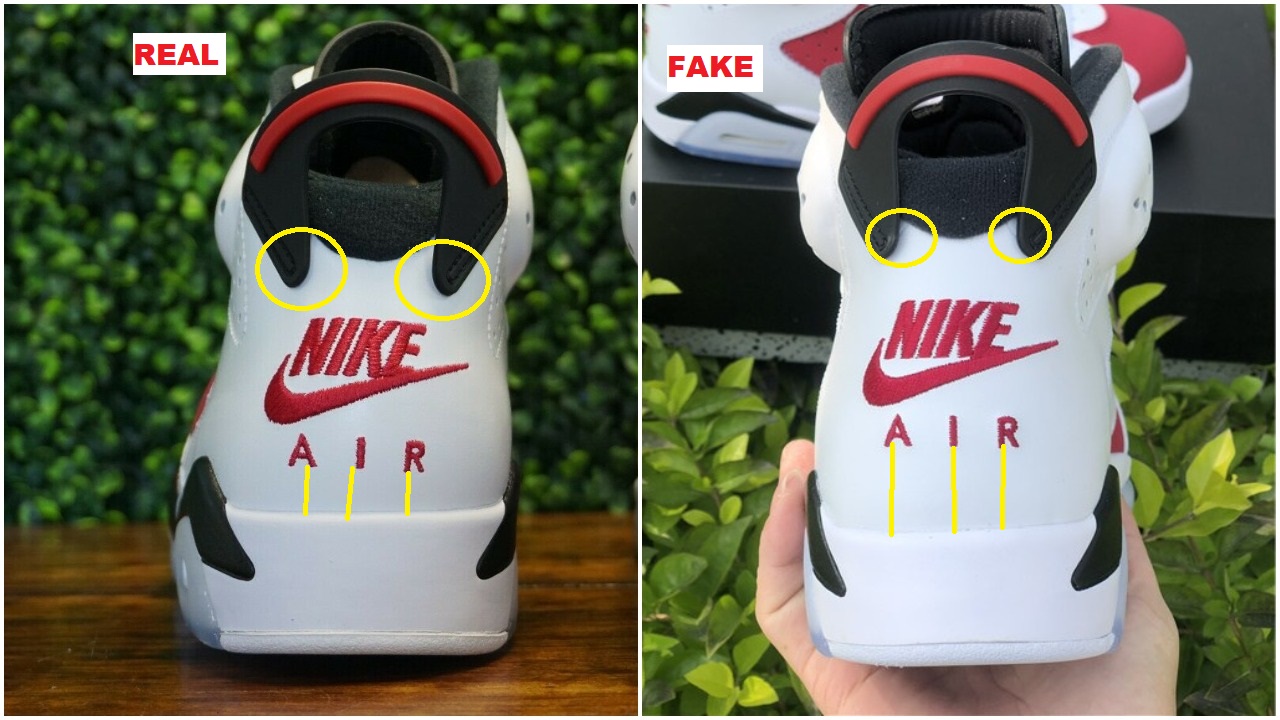 The gap between the “Air” text and the edge of the midsole is wider on the fake pair ( see yellow lines). The yellow circles show you how further down the black tab extend on the authentic pair. Remember that both are size 9’s so they ought to have the same features. 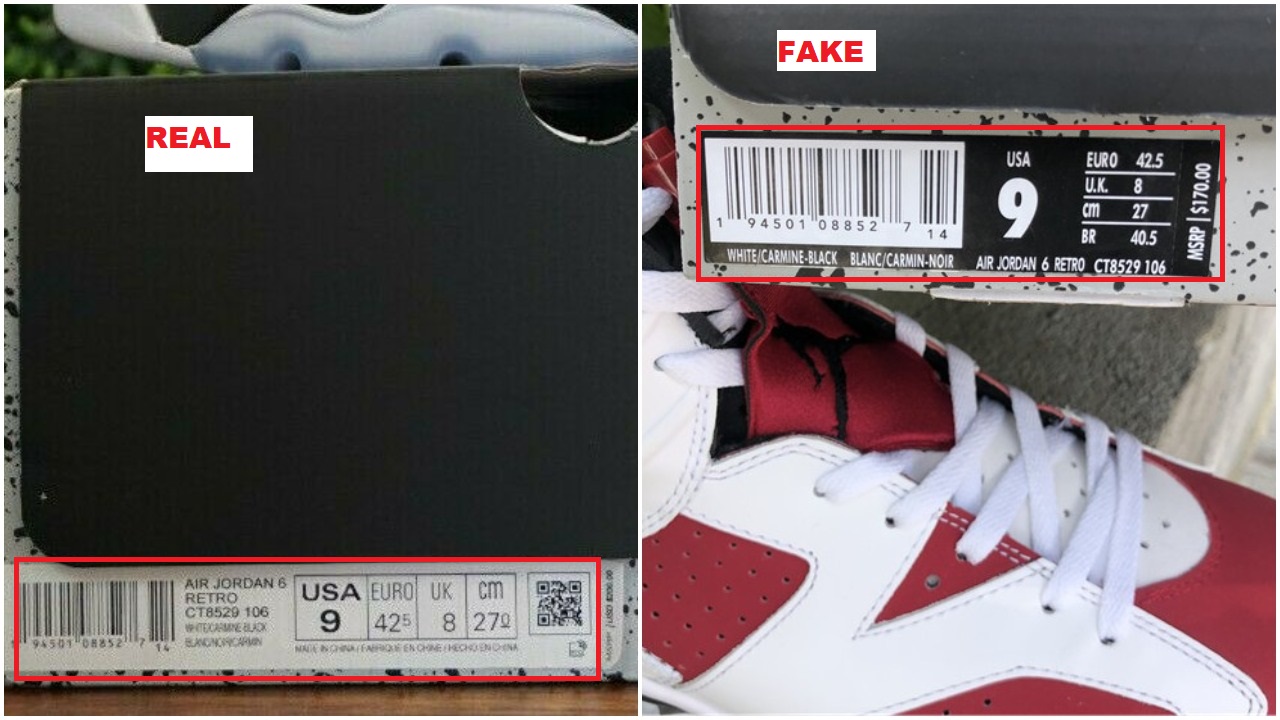 The fake air jordan 6 carmine has the wrong box label, the difference is obvious.

You can purchase authentic pairs on eBay via authenticity guaranteed, see listings below