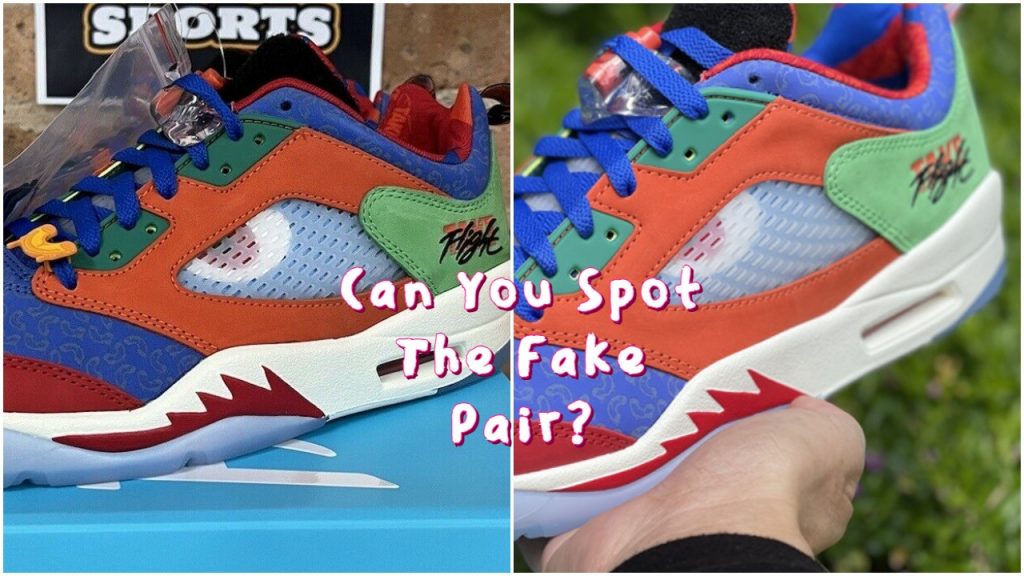 In the sneakerhead community, it’s always been a challenge to know whether you’re getting the real thing or not. With Air Jordans in particular, there are many replicas on the market that are convincing enough to fool unsuspecting buyers. So how can you protect yourself and make sure you’re not shelling out for a fake? In this  post, we’ll outline some tips for spotting and identifying a Fake Air Jordan 5 Low Doernbecher. We’ll target the panels, the midsole, the shark teeth, the back, the box and more. But first, let’s go through our preliminary steps.

. Smell the shoes ( only if you’ve already made the purchase) 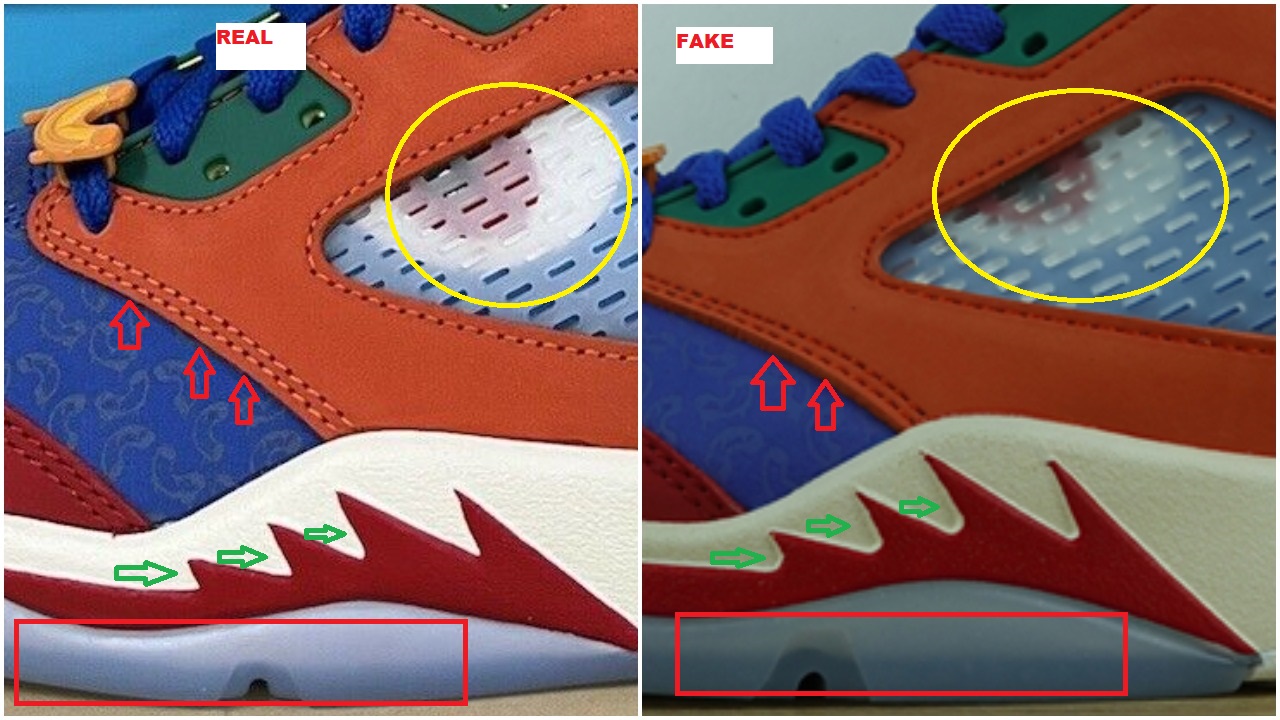 The yellow circle shows you how the netting is less translucent on the fake pair. The “eye” is a bi more camouflaged on the replica pair. The paint job on the shark teeth is sloppy on the fake pair. You can see white residue on the edges. The leather cut on the forefoot overlay is much thicker on the counterfeit pair ( see red arrows). The outsole is also more foggy on the replicas, see red rectangle. 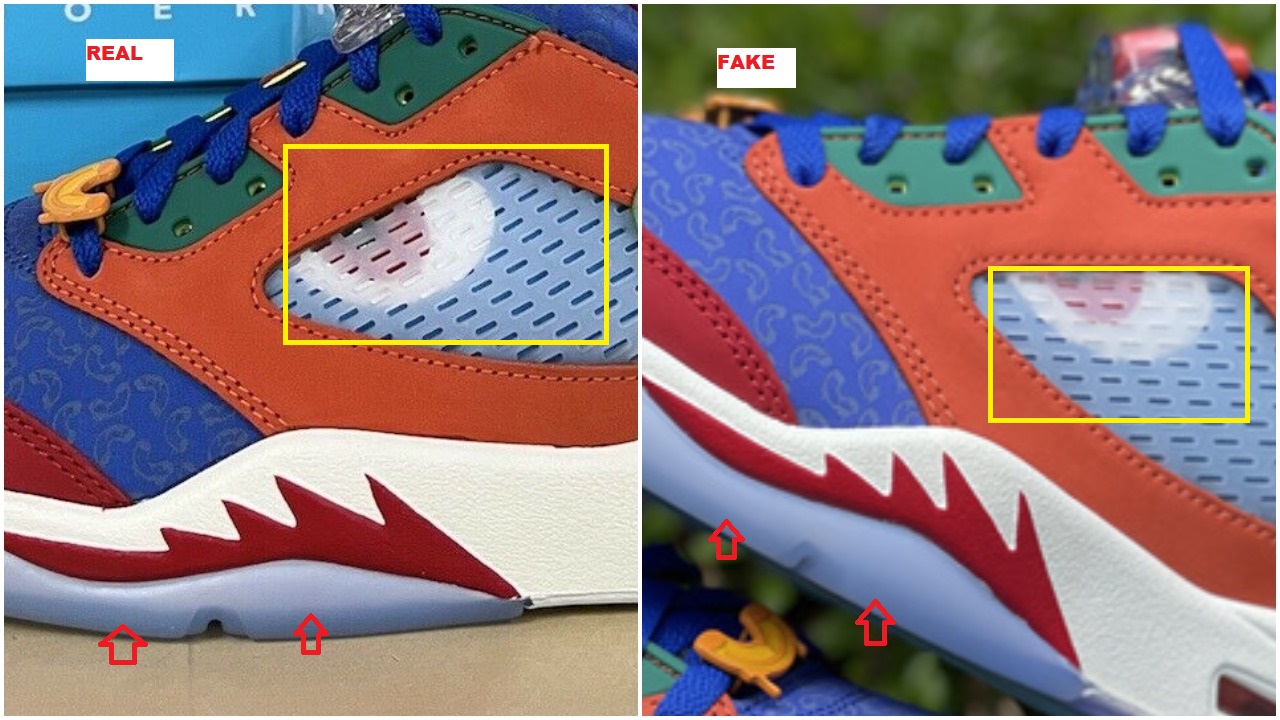 There were two fake pairs that I saw this morning. The one above is the better of the two. But you’ll still notice that the netting isn’t as translucent on the replicas. And the midsole this time isn’t even translucent on the fake Jordan 5 low Doernbecher. 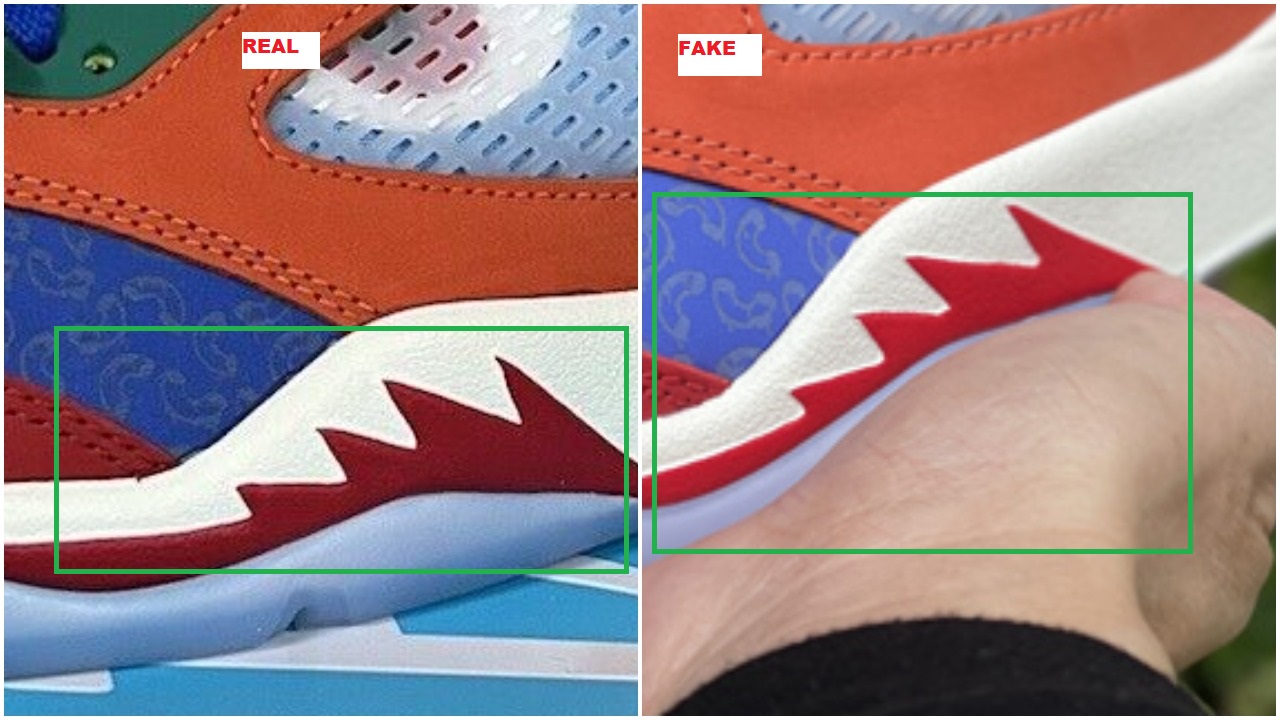 You can see that the red color isn’t the same between both pairs, the authentic pair is a bit more burgundy. 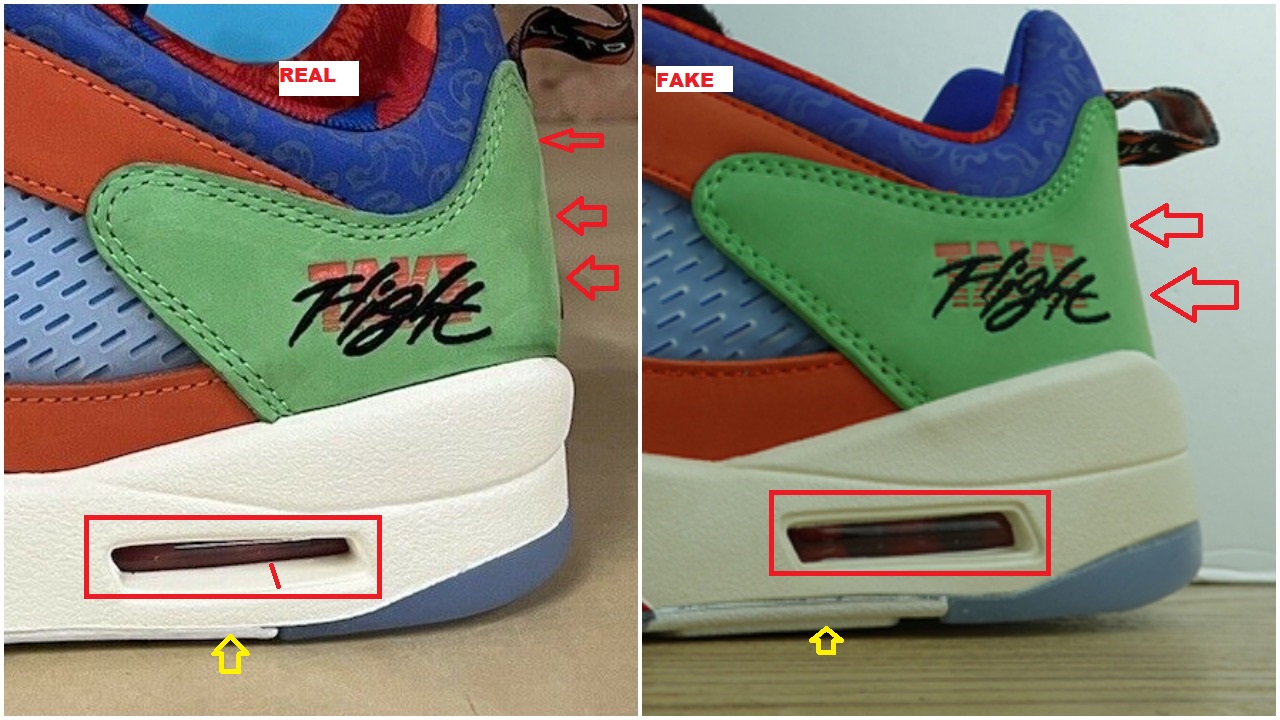 The heel counter of the fake pair has a terrible acute shape ( see red arrows). The yellow arrow shows you how the heel area of the fake pair’s midsole has a stack of rubber materials. Another recurring problem with most fake 5’s is the gap between the screen and the edge of the midsole ( it’s often much smaller on the fakes). 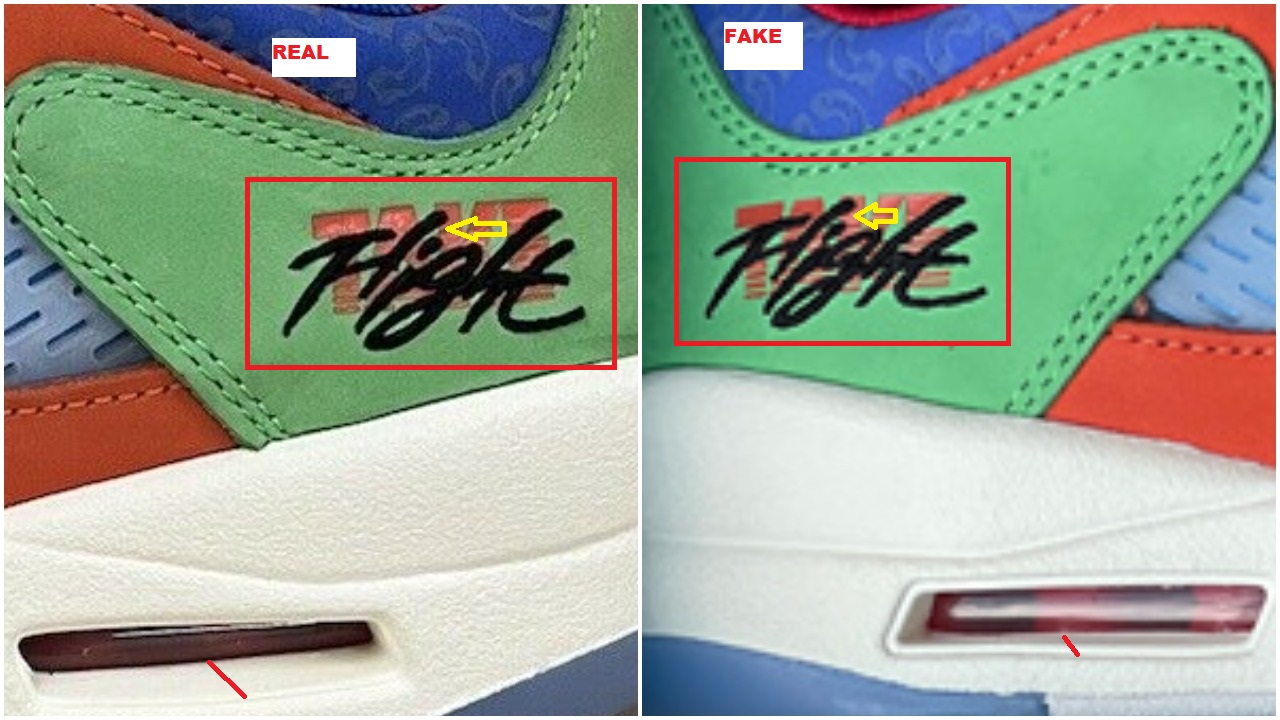 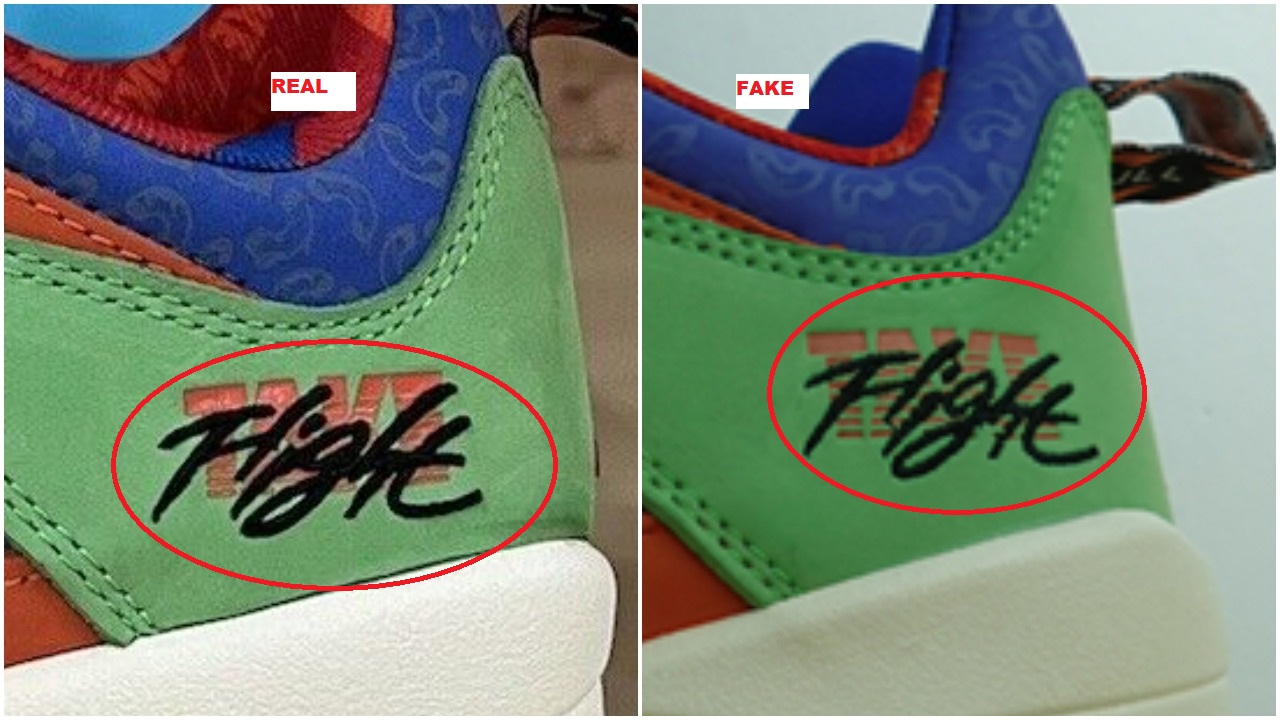 Even on the better fake pair, the “Take Flight” text is much bolder and bigger on the real pair. 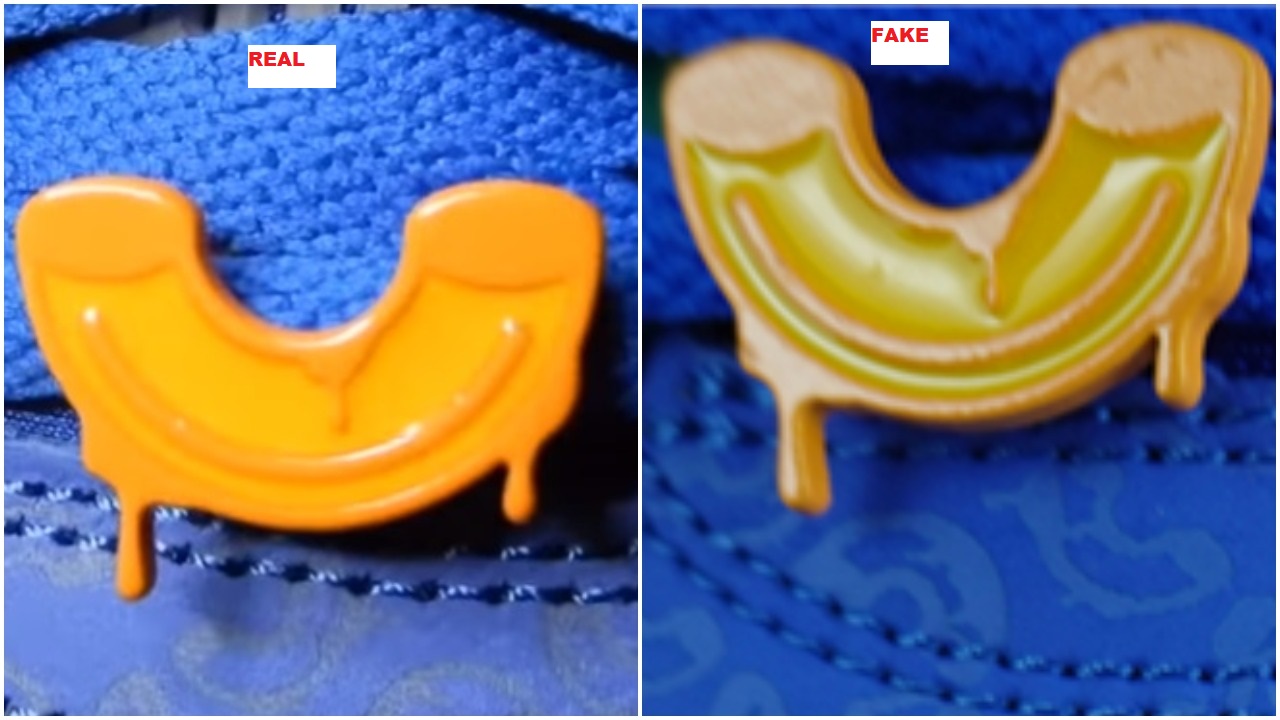 No comments are needed here, the differences are obvious on the macaroni cheese pin. 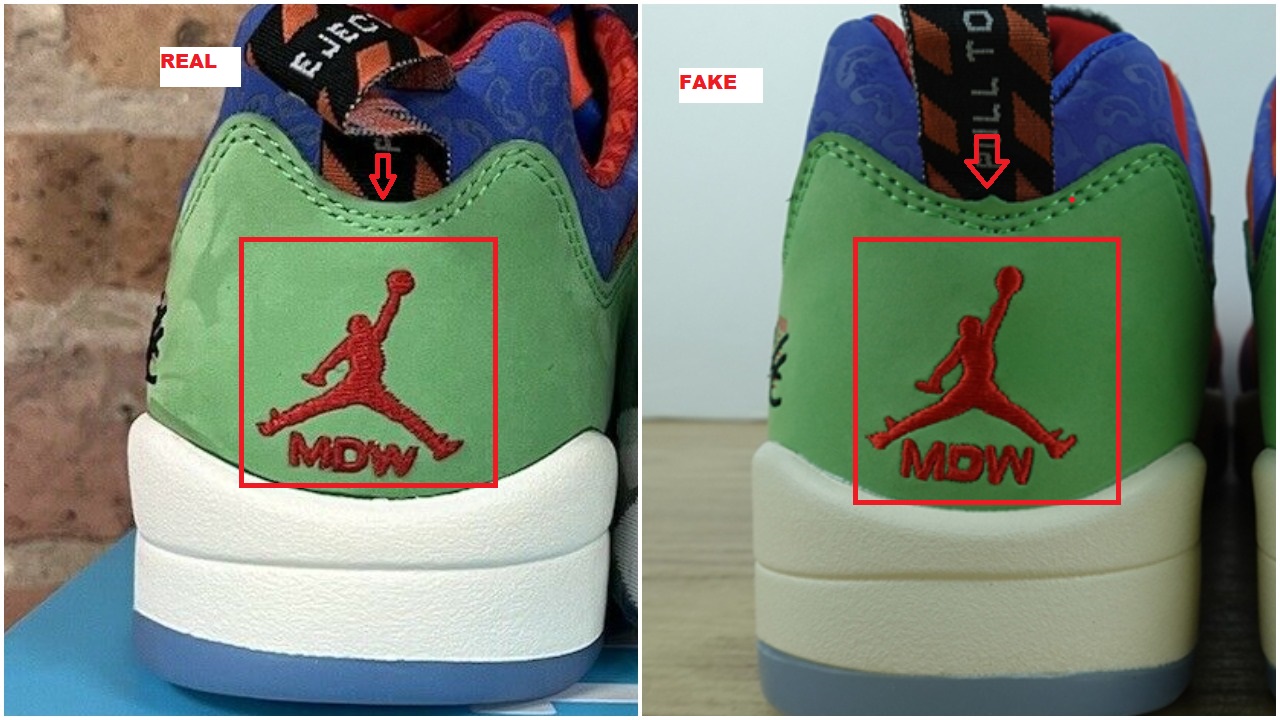 The jumpman doesn;t look the same between both pairs. And the fake pair is a bit narrower. Also look at the widow peak highlighted on the replica. 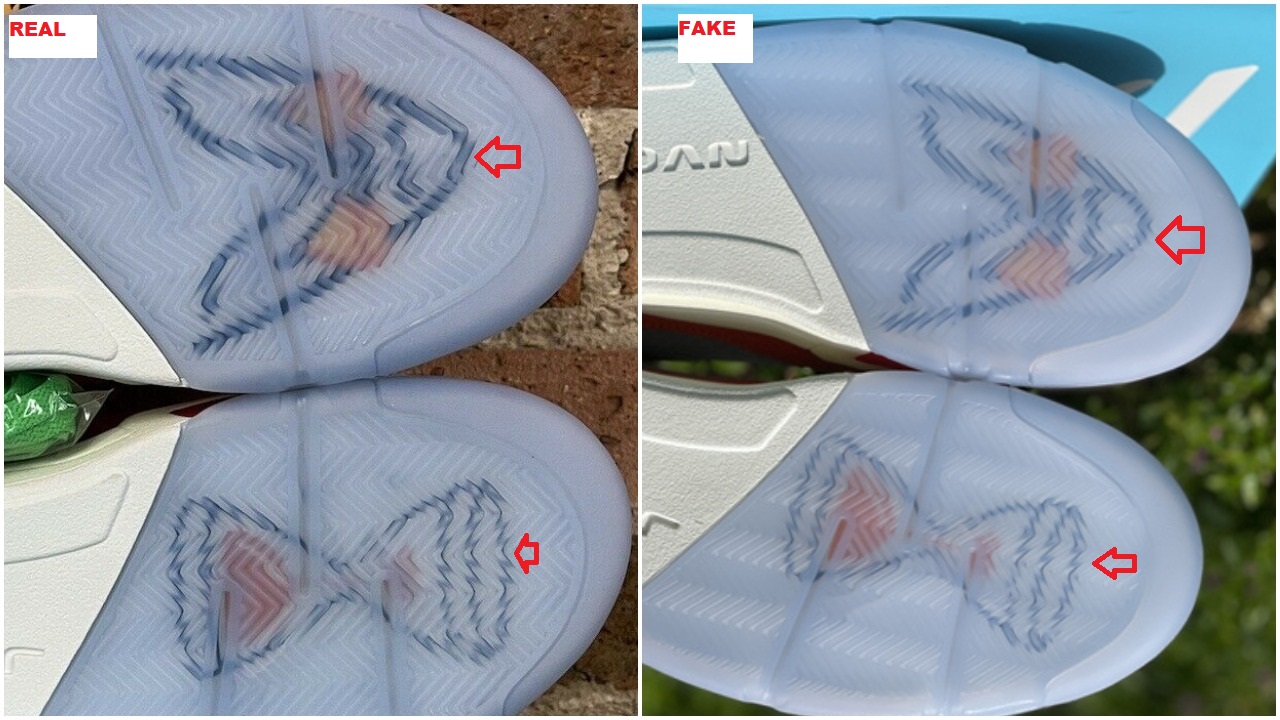 You can clearly see how the Fake air Jordan 5 Low doernbecher’s outsole isn’t as translucent as the authentic pair. The “hour glass” and “shark” aren’t quite vivid on the replicas. 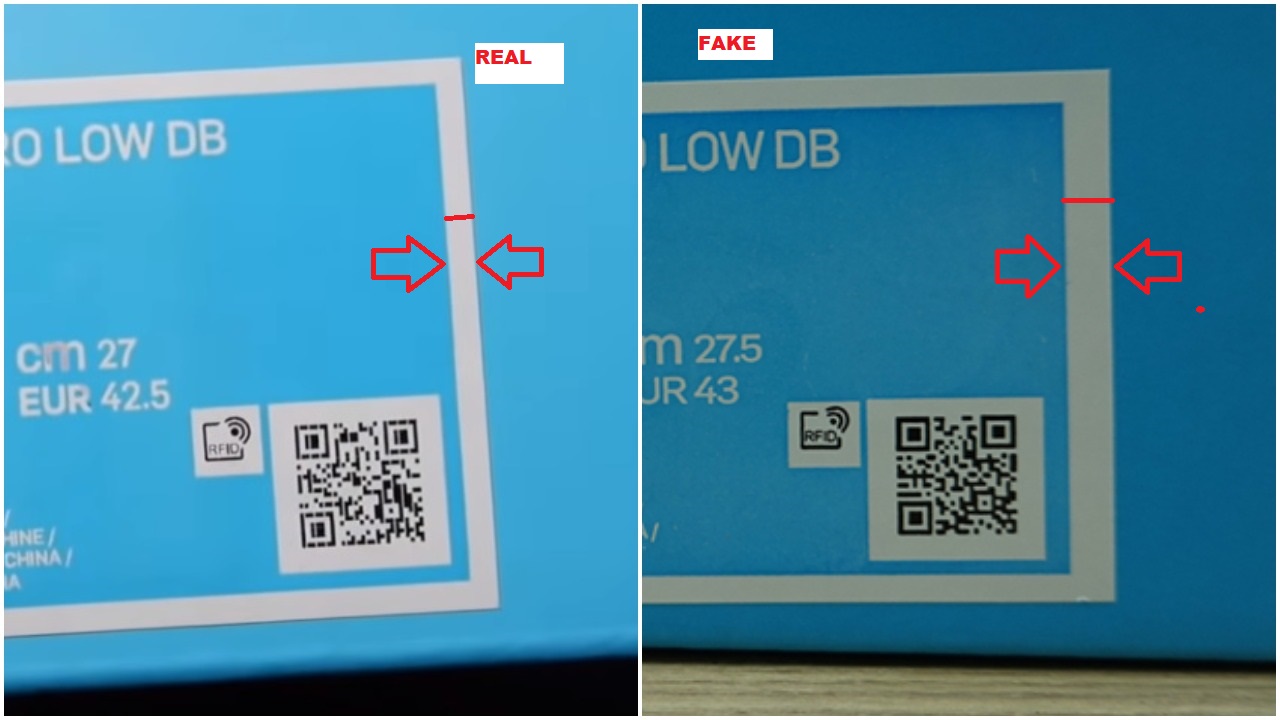 Look at the border around the label, it is much wider on the fake box.

There you have it folks,  Hopefully with these tips, you’ll be able to quickly legit check the Air Jordan 5 low Doernbecher. I’ll update the post as soon as a new batch of fakes appears. In the meantime, do not buy this shoe from anyone unless all things above that I mentioned are cleared.

I’ve also added a quick video in which I teach you how to authenticate your own sneakers, see video below

You can check out our other real vs fake comparisons via the Legit Check page. If you need additional help, feel free to reach out  by emailing me at mistourasal@gmail.com or fill out the form below