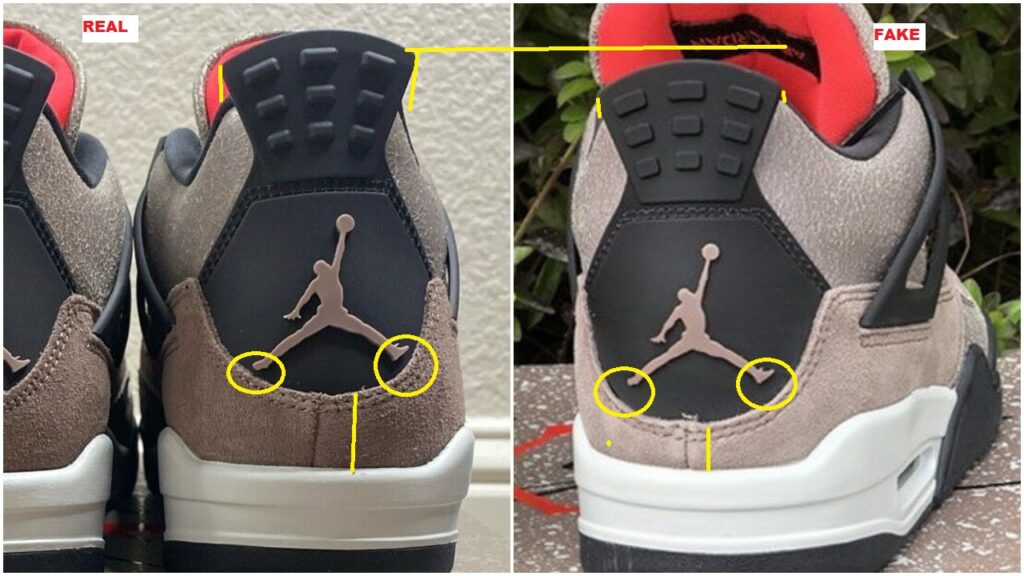 It’s darn near impossible to get Jordan retros these days. I tried in vain to get a pair of the Taupe Haze retro 4 a couple of weeks ago. At the time when the shoe dropped, there were no fakes on the market. Yesterday I was doing my routine lieutenant Columbo check out and came across a fake Air Jordan 4 taupe haze. Since I don’t have an actual legitimate pair on hands, I had to rely on images of authentic pairs I fetched on ebay via authenticity guaranteed. The level of accuracy is always questionable when I don’t have a real pair on hands, but I do believe my years of experience give these comparisons enough credibility. Before we start looking at nuances, it’s always good to go through our preliminary steps. 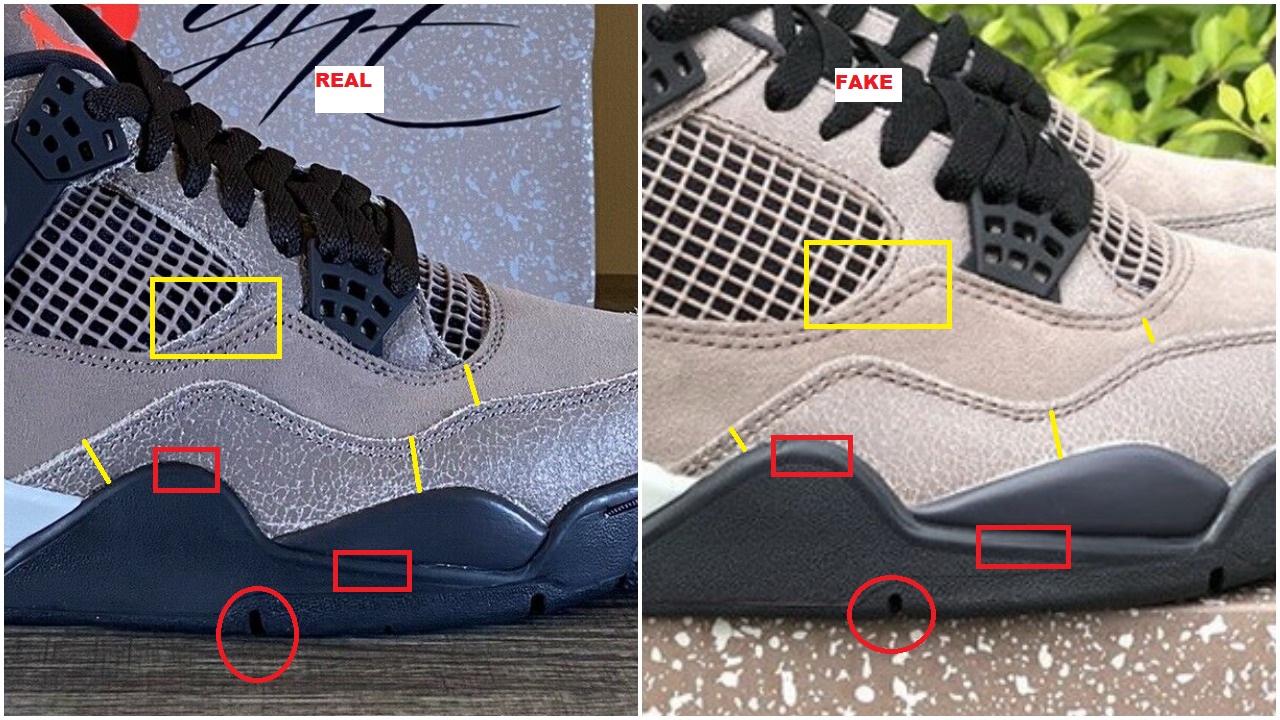 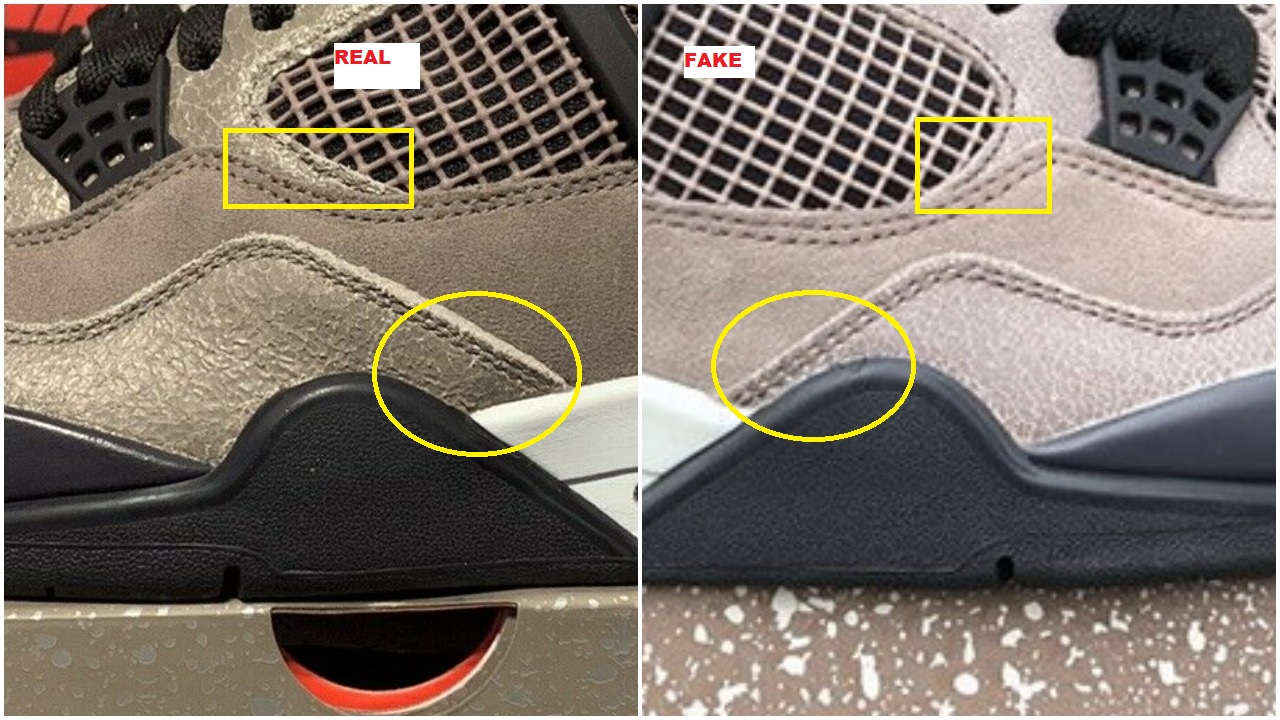 I wanted to show you a much larger picture of the panel overlay to point out how much wider the leather cut on the authentic pair ( see yellow circle). Also the yellow rectangle shows you how there is literally no gap between the two edges on the fake pair. 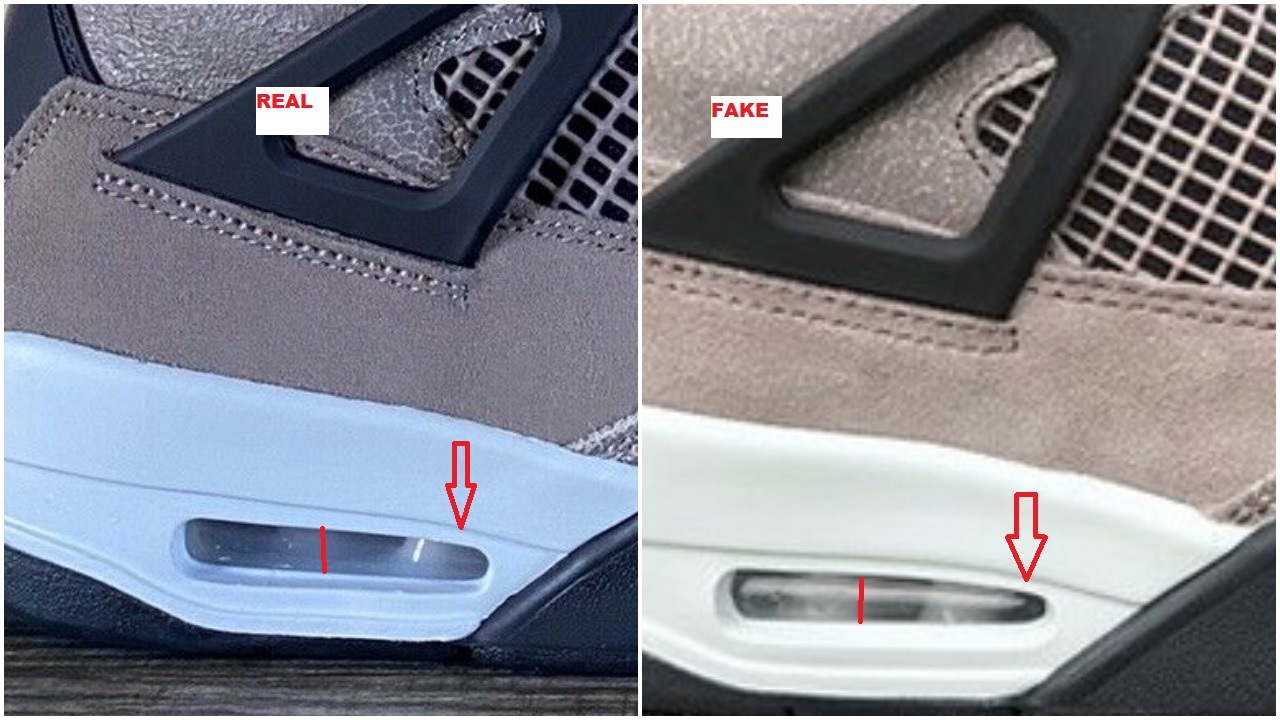 The air unit of the fake pair is slightly much narrower on the fake pair and that is clearly highlighted near the front ( see red arrow and red line). 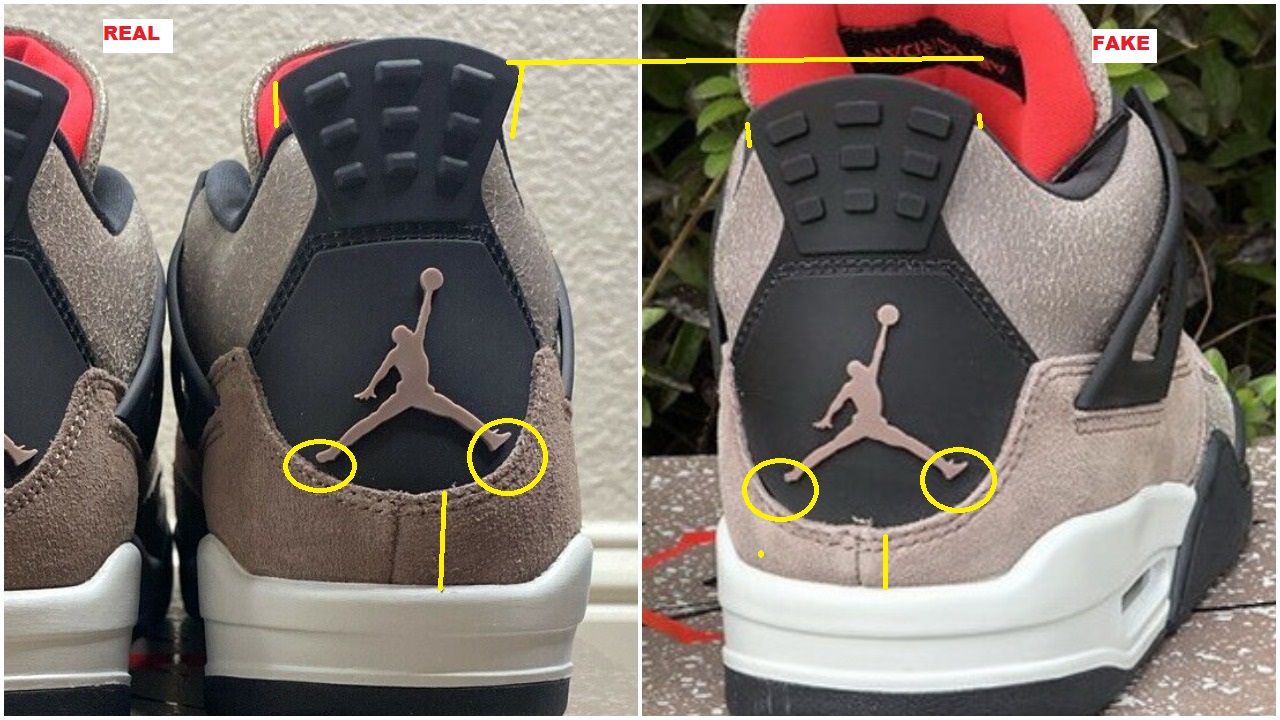 Both shoes are size 7’s , this is just a quick reminder. You can clearly see that the leather overlay at the heel has a higher cut on the authentic pair. The yellow circles show you how the edge of the overlay is almost adjacent to the foot of the jumpman logo ( that indicates how high the cut is). You can also check out the yellow line which clearly emphasizes the difference between both pairs. The heel tab is also very short on the fake  air jordan 4 taupe haze  ( I drew that horizontal yellow line to show you the difference between both). 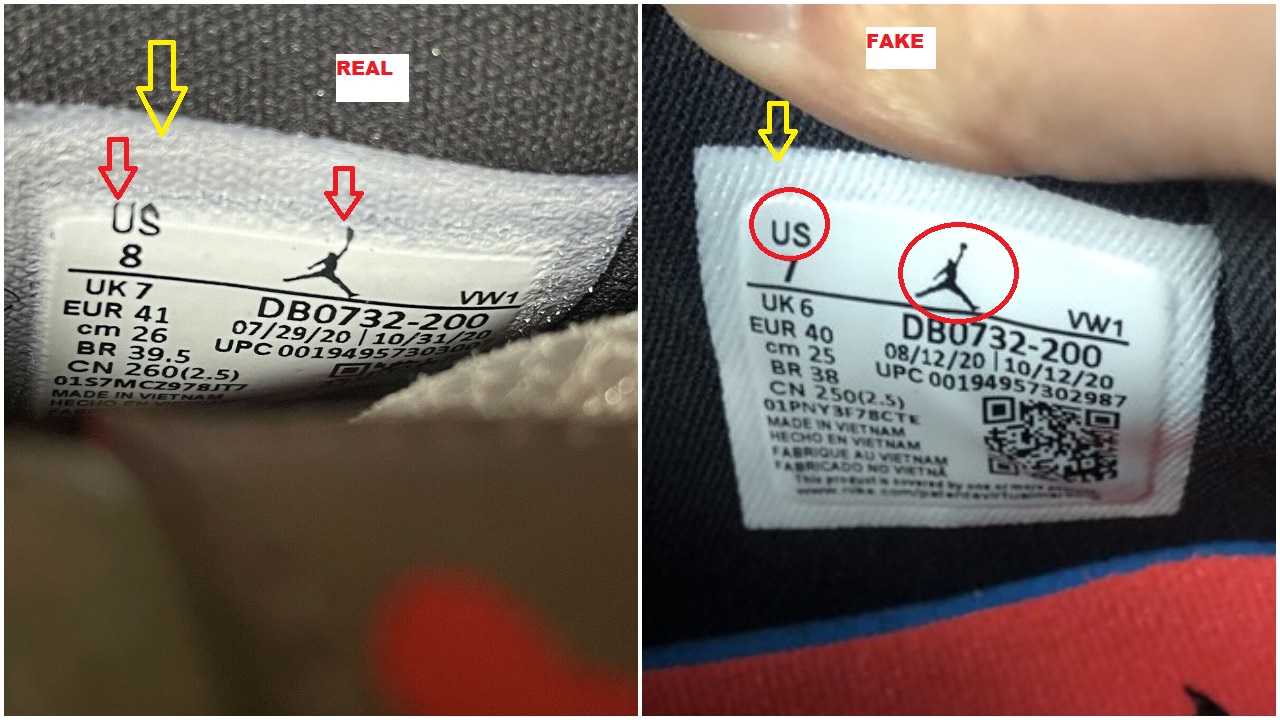 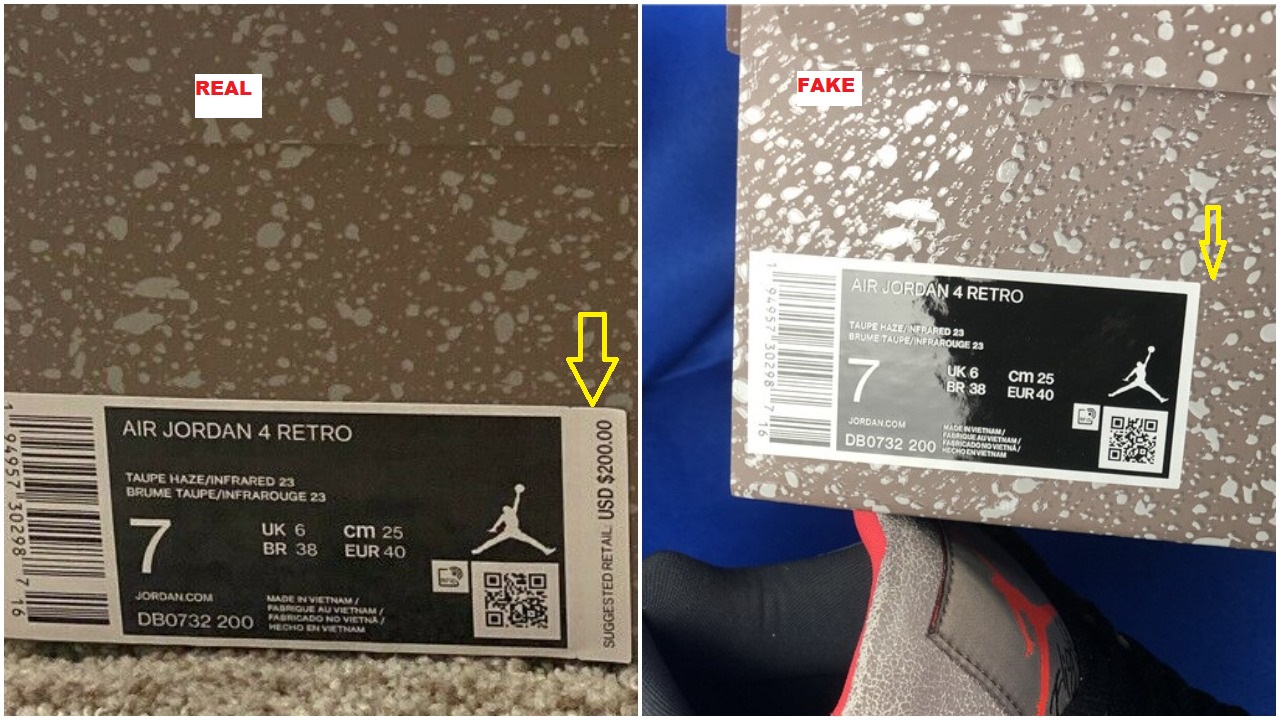 I want to be very careful when it comes to the box label. Shoes coming from US retailers will bear the suggested retail sticker. Any shoes coming from non US retailers will not have that, it doesn’t necessarily mean that a shoe is fake because the sticker  is missing. However it’s important to note that on the fake pair, that sticker is nowhere to be found. And you can also see how the box label isn’t even adjacent to the edge of the box.

You can buy authentic pairs now on eBay from our featured sellers via authenticity guaranteed, see listings below