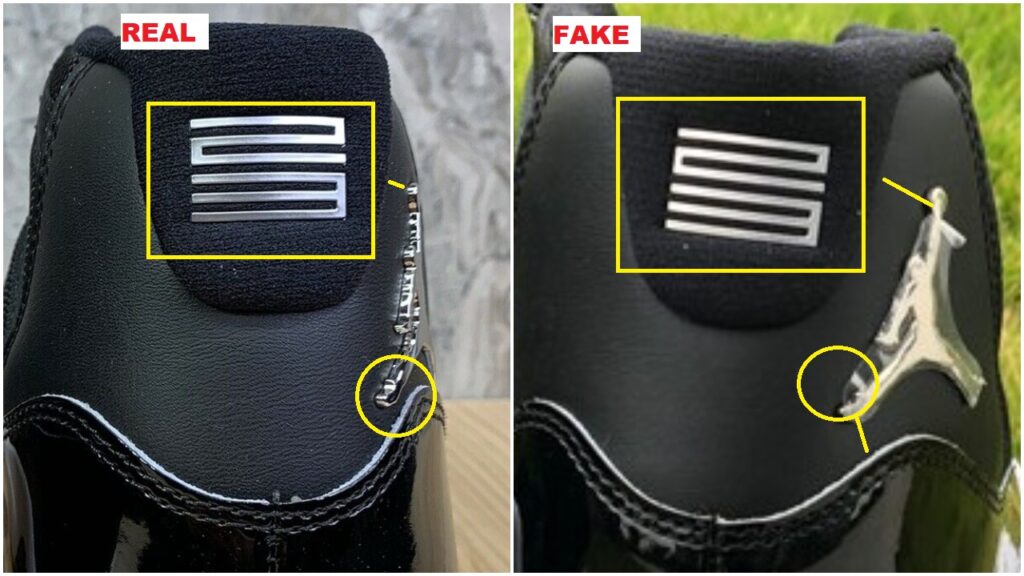 Nike did a shock drop about a week ago on the Air Jordan 11 Jubilee 25th Anniversary. I had seen fake pairs for about a month now but I refrained from exposing them since I didn’t quite have an authentic pair as a reference. I was able to fetch images of legitimate pairs yesterday and pinned them against the fakes. I spotted some flaws that I wanted to share with you. But before we do that, let’s go through our preliminary steps.

The Jordan 11 Jubilee only released via Nike SNKRS app thus far ,so if you purchase a pair from a third party seller, be sure to ask for a proof of purchase ( and make sure it is from SNKRS). Once the shoe drops officially, you can ask for receipts from authorized retailers.

Now let’s look at the flaws I spotted on the Fake Air Jordan 11 Jubilee 25th anniversary. I want to let you know at the outset that both shoes are a size 9.5 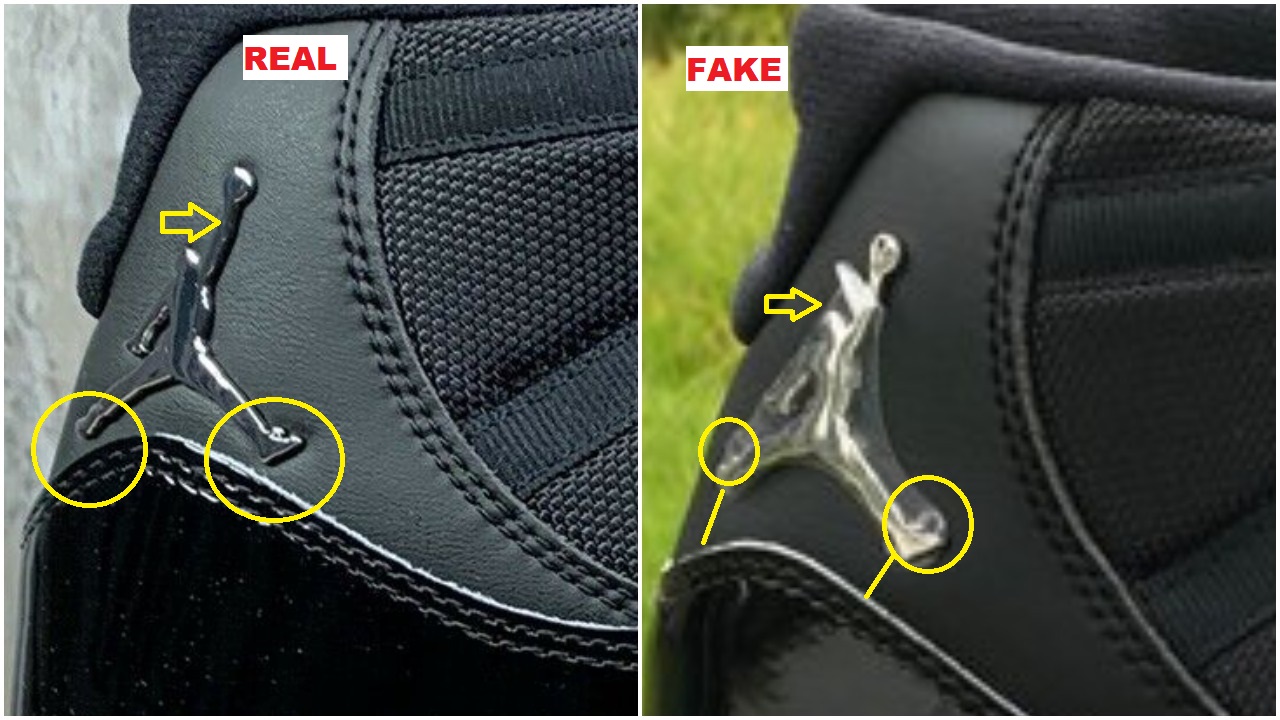 The spacing between the leg of jumpman and the heel patent overlay is wider on the fake pair ( both are 9.5 so there shouldn’t be that much of a difference). You can also clearly see that the silver material on the fake pair is awful looking. 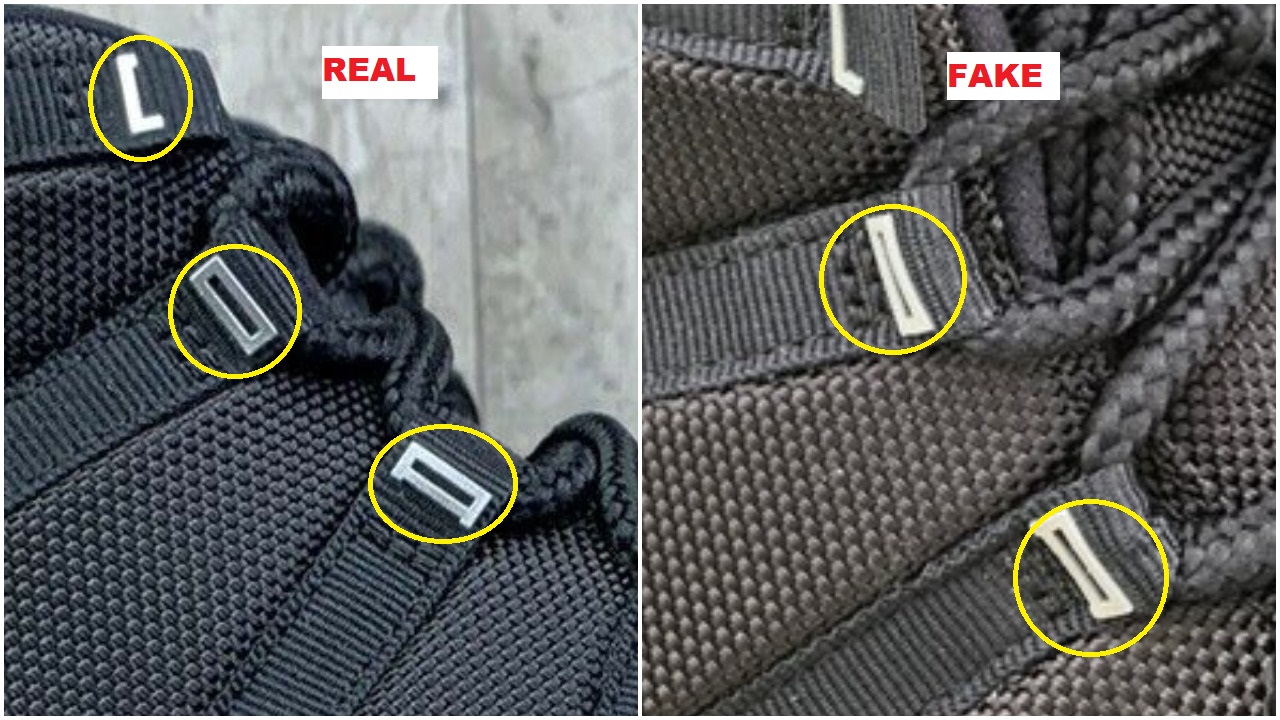 The material used on the panel straps eyelets isn’t the same between both pairs. And you’ll also see that the eyelet’s hole is bigger on the authentic pair. 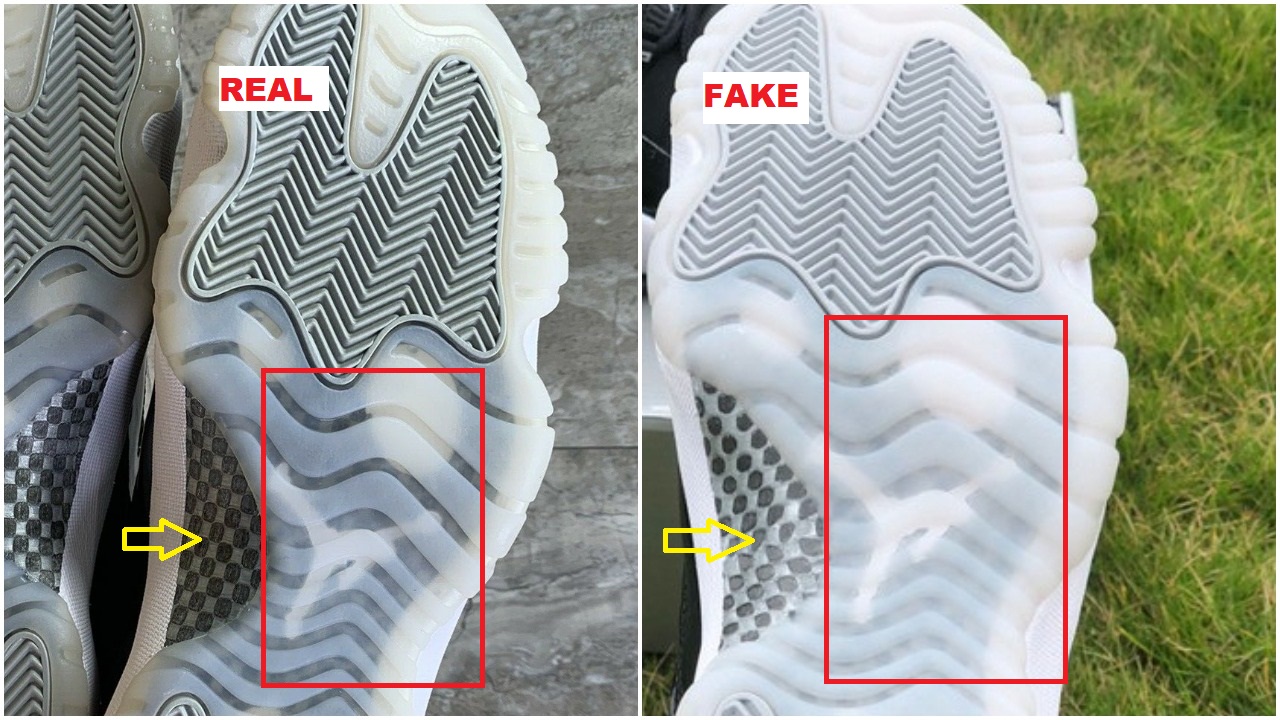 The outsole of the fake pair is barely transparent in comparison to the outsole of the authentic pair. The jumpman is more noticeable on the legitimate pair. Also look at the pattern of the carbon fiber shank. The black squares are not adjacent at the corners on the fake pair. The picture below will give you a closer look at it. 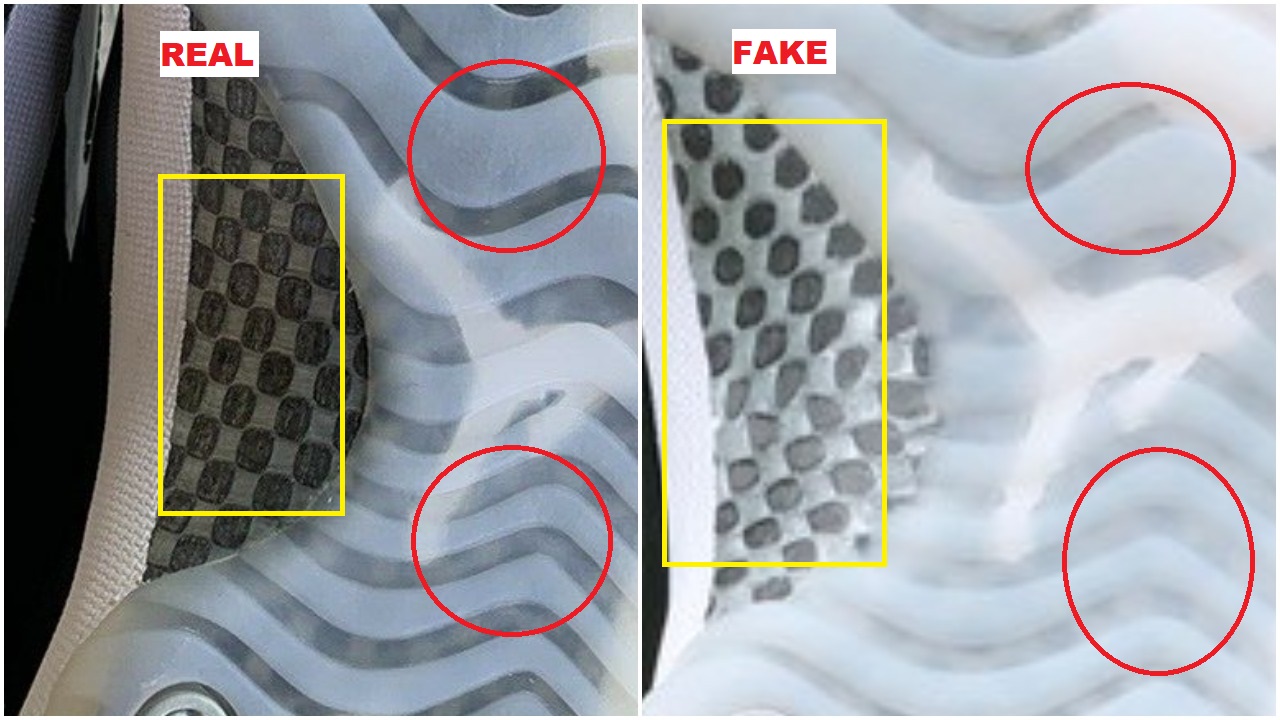 You can see the huge difference between the carbon fiber, and you can also see how very foggy the outsole of the fake pair is. 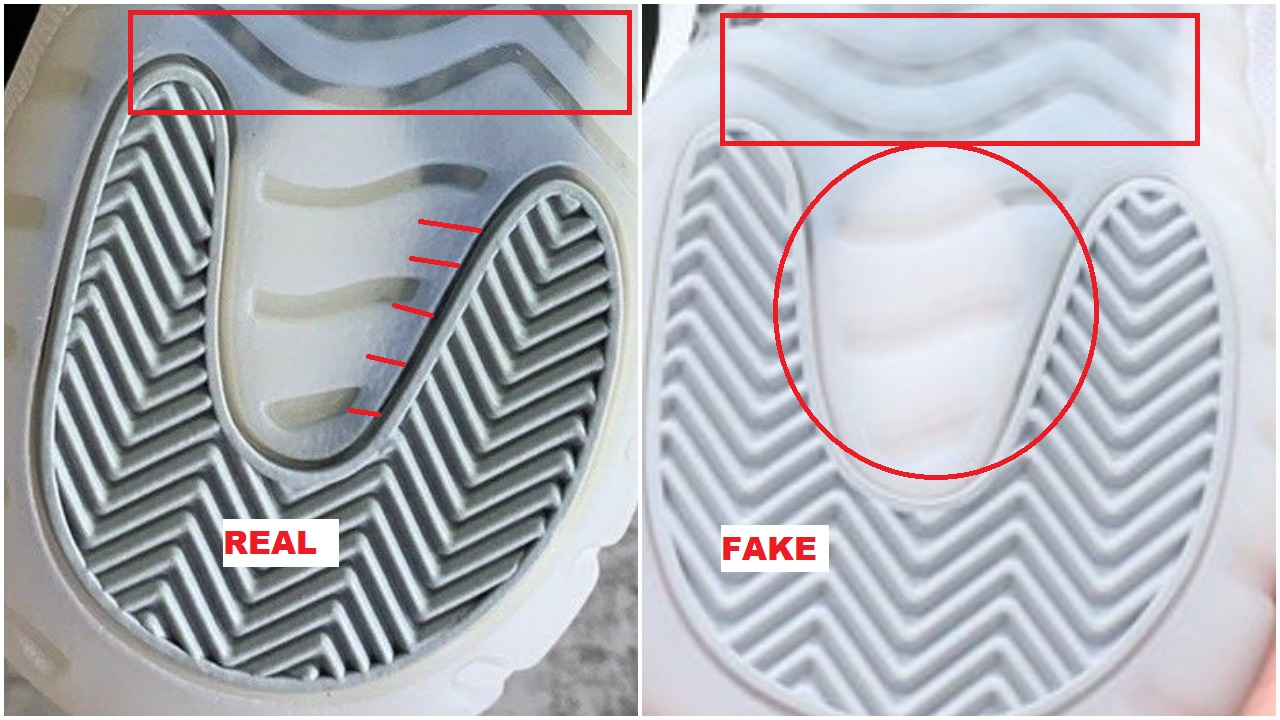 There is a bigger gap between the pod at the forefoot and the herringbone thread ( see red lines and circle). And once again you’ll see how very cloudy the outsole of the Fake Air Jordan 11 Jubilee is. 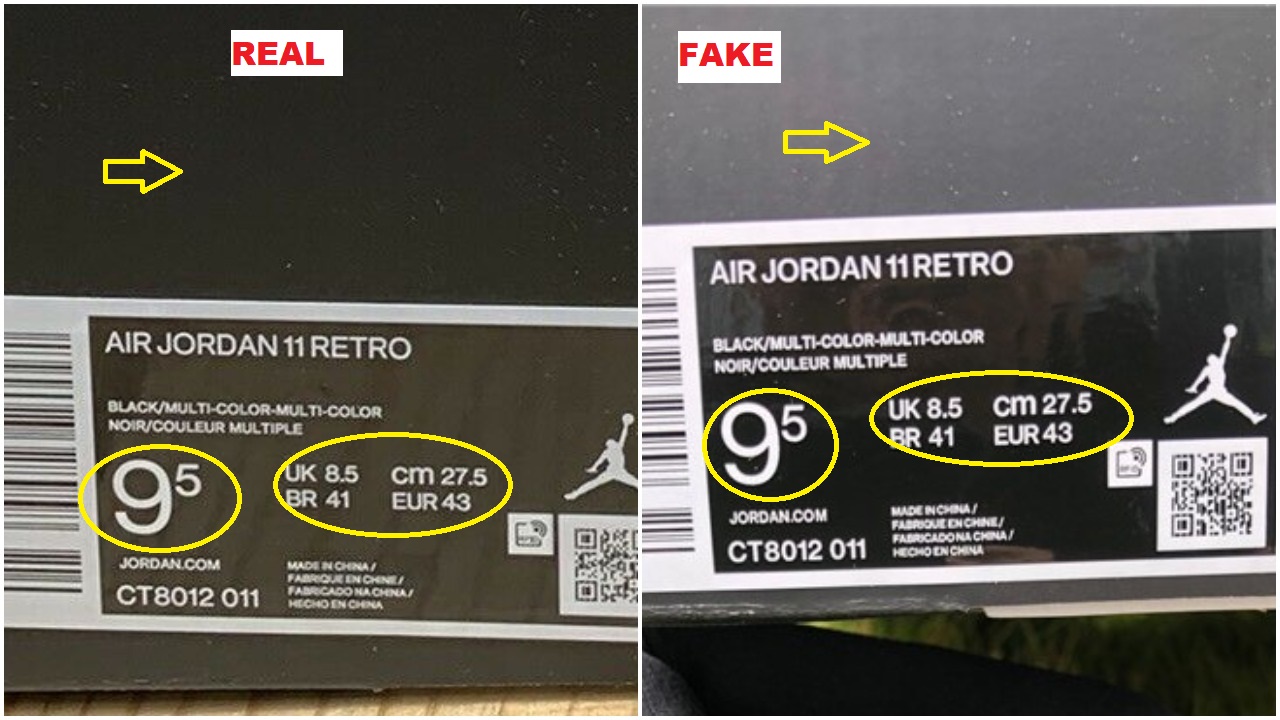 There aren’t major differences on the label but I noticed that the “9,5” of the authentic pair is slightly wider. Also notice how the font of the letters and the numbers on the fake label are a bit bolder.

So far these are the only nuances I’ve spotted. I’ll add more if I come across more differences.

You can buy authentic pairs of the Air Jordan 11 Jubilee on eBay from our featured sellers via Authenticity guaranteed, CLICK HERE

Be sure to check our Legit Check page for other comparisons.