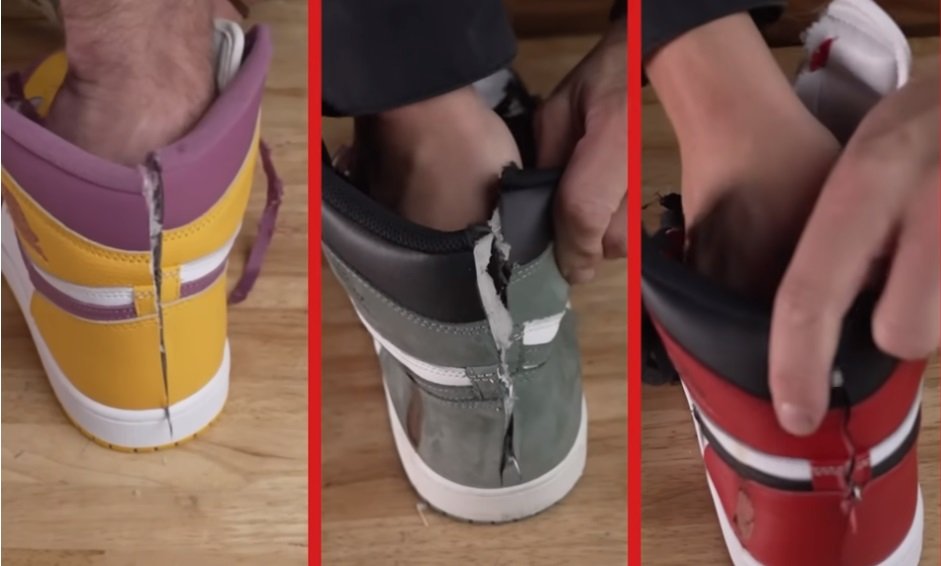 When it comes to sneakers, there are few brands that command as much respect and admiration as Jordan. The Nike-owned brand has been churning out iconic sneakers for decades, and their first signature shoe, the Air Jordan 1, is still one of the most coveted sneakers on the market today. Unfortunately, that also makes it a prime target for counterfeiters. In this post, we’ll take a close look at the quality of fake Air  Jordan 1 Sneakers  with the help of Rose Anvil, an expert in leathercraft.

It’s true that on both the fake and authentic Air Jordan 1 Sneakers, there is a heavy coating of plastic on top of all the leathers. But upon closer inspection, some flaws on the fake pairs are noticeable i.e. crooked stitching, puckering on portions of the ankle liner. As Rose Anvil examined the perforated panel and toe bumper, the first slightly noticeable difference is that the perforated panel is about 1.9mm thick on the real pair while all three fake pairs are 1.5mm, 1.4mm and 1.4mm thick respectively. And on the toe bumper panel, the real pair is about 1.6mm thick while the fakes are 1.1mm,1.5mm and 1.4mm. So it’s clear that the real pairs have a much thicker leather material. But the differences are very minimal and the average buyer won’t notice it unless he has a tool similar to the one used in the video to measure the thickness.

Rose Anvil’s comparison of the heavy plastic coating on top of both fake and real Jordan 1 leathers was fascinating. It is commonly assumed that counterfeit products are made of lower-quality materials, but there was no discernible difference between the two in this case. Even a cross section analysis revealed that the grain and texture of the leather were relatively similar. This is most likely because both shoes are made of c to b grade leather. As a result, simply examining the leather materials may make distinguishing between fake and authentic Jordan 1s difficult. 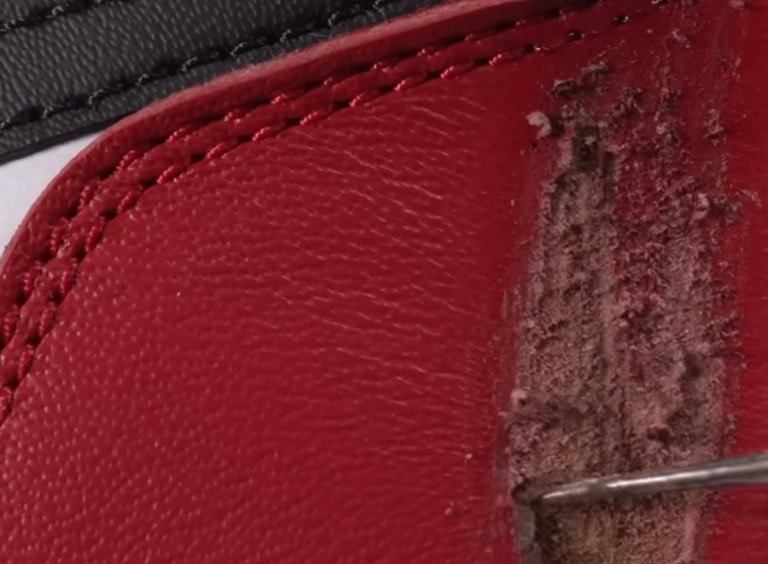 Thing got very interesting when he tested the outsole, and I’m not an expert with the jargon that he used, so I’ll try my best to be as concise as possible with the observations that were made.

The difference between all four pairs was the density of the rubber, so Rose Anvil tested the genuine pair first with his hardness meter. The sidewall was tested  first, and it came in from 70 to 80 Shore A ( about as hard as car tire). He then tested its bottom at the pivot point, and it came in at 60 shore A. For the fake pairs,  one of them was about  67 to 75 Shore A on the sidewall and 60 to 63 on the pivot point, the  the other was 75 to 79 Shore A (so a little harder closer to the authentic pair on the sidewall) It was about 65 to 67 on the pivot point.

One of the Fake Jordan 1s ( Chicago edition) had the same 70 to 80 Shore A on its sidewall  and  60 to 68 shore A on the pivot point as the the authentic pair. But there was still a difference in the outsoles. So, even though the material tested very similarly, the fake pairs were more warped in comparison to the authentic pair.

The ball drop test is a simple but effective way to compare the impact protection of different shoes. In this test, a steel ball is dropped onto the heel of the shoe from a fixed height. The height of the ball bounce is then measured and used to calculate the impact protection score. The Fake  Air Jordan 1 Chicago had the best test result with an average score of 14.4 inches, while another fake pair came in second with a 11.5 inch score. The authentic pair came in third with a score of 11.1 inches, and the last fake pair had a poor score of 9.6 inches. This test is a good indicator of how well a shoe will protect your feet from shock, and the high bounce of the Fake Jordan 1 Chicago suggests that it will provide excellent protection. I have written a post, discussing the LJR Batch Fake Jordan 1s, this Chicago pair might be one of them, for more read the post below

What Was Revealed When They Were Cut In Half?

Both the three pair of Fake Jordan 1s and the real one had air units,  all were  encapsulated by a foam wedge. They all had that gray, layer of foam, were all strobel stitched, topped with an insert or an insole. And when their respective foam wedges on the inside were tested with a durometer, the results were almost identical. The authentic pair was 29 to 32,  the blue Fake 1 was 29 to 32,  the green was 22 to 25 and the Chicago pair was also 22 to 25. So the reason why the authentic pair had a better puncture resistance score is because  it featured a harder foam material.

The most noticeable difference that was revealed when the shoes were cut in half are the intangibles i.e. glue, how the components are cemented.  The fakes separate much easier than the real thing. This is because the glue holding them together is not as strong, so you can just peel them apart. Although the materials used were the fairly similar, the attention to certain key details wasn’t there. But here is the scary part; counterfeiters are probably going to watch this video and polish those areas and then we’ll have a real problem.

Now you see why the average consumer is utterly comfortable with buying fake pairs, especially the Jordan 1s. You can also watch the entire video courtesy of Rose Anvil.