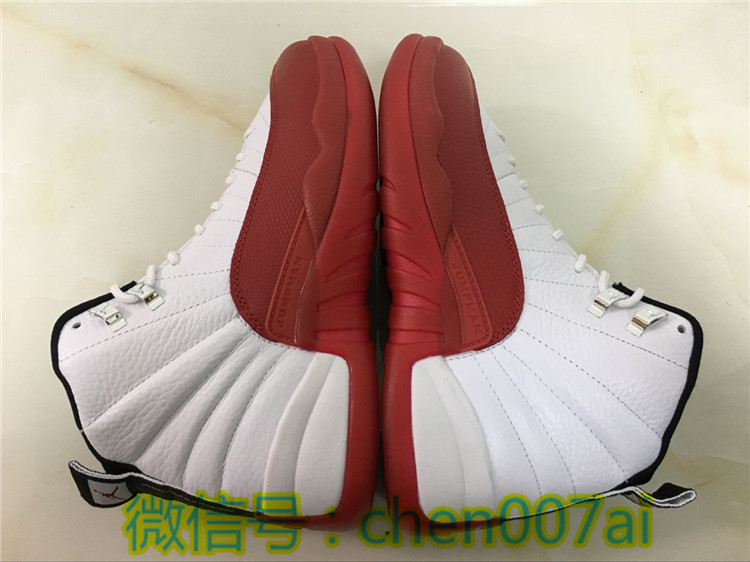 It’s been a while since I have written about Fake sneakers; This is the busiest time of the year for me. We are bombarded with a lot of sales from Amazon, Ebay, and several other responsibilities. But I wanted to quickly warn you about these Fake Air Jordan 12 Retro Cherry. Like I said before, fakes have become so good that it is really hard to detect them unless you have an authentic pair on hand. However, one of the easiest thing to look at initially is the box and the stitching. On the picture above, you will notice that the stitching is a little off- and to be honest, the shoes don’t look that bad on this side view. The one thing that quickly gave it away is the price ( 550 Chinese yuan roughly $80)- this is basically half of the retail price , so use your common sense. Unfortunately, most people buy from shady sellers who purchase their inventory  from Taobao or other illegitimate sources. And these sellers will tell you they have “plugs” inside Nike factories, meanwhile they are ripping you off of your hard earned money. They will even try to throw you off by using the “sample pair” trick; basically they use a forged inside label with sample tags on it ( in attempt to make it seem like the shoes are early samples). Inside stitching is awful and looks too loose. The carbon fiber plate is another dead giveaway- the plate depicted on the picture above isn’t real. The threads on the herringbone pattern do not have any depth ( very shallow, they are supposed to be deeper) and the peaks on the waves aren’t sharp enough but too curvy. Those are the main things that I would focus on today, check the remaining pictures below and use sound judgement before you buy these from anyone early. You can buy authentic pairs of the Jordan 12 Alternate Cherry via our featured trusted ebay sellers, see CLICK HERE