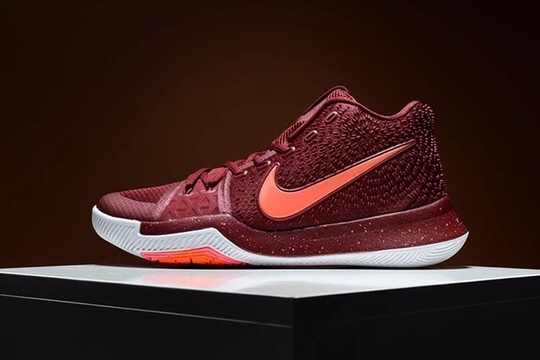 The Kyrie 3 black ice just dropped a week ago, a day after Kyrie hit the game winning shot against the Warriors. I picked up a pair and shared it on my Facebook page, and was met with mixed reviews- some liked them and others just thought the aesthetic was awful. I believe these were made primarily to meet Kyrie’s needs on the court. If you weren’t too fond of the black colorway , another one is on the way : Nike Kyrie 3 Red Total Crimson 852395 681. 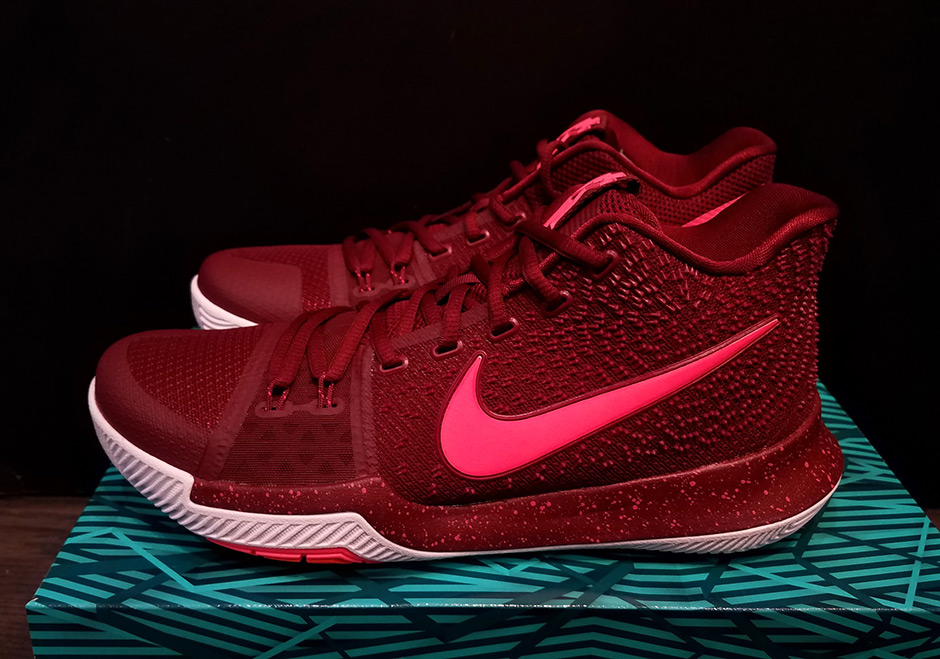 The shoes come in a crimson red upper with pink highlights on the outsole and the side panels swoosh logo. From the midfoot to the heel counter, you can recognize some elements of the kyrie 1

; also present is a subtle band adjacent to the toe box ( for additional stability). Like I said before the Kyrie 3 seems like a fusion of the Kyrie 1&2. Branding comes in the signature Nike swoosh on the lateral & medial side panels ( in pink);  you will also find a debossed “Nike” text on the heel. Kyrie’s own logo will occupy the outside of the tongue and the outsole; located on the outside of the tongue as well  is Kyrie’s motto “JBY” ( Just Be You).

The shoes feature a combination of hyperfuse, flyweave and mesh ( each intended for durability, natural motion and ventilation purposes). Kyrie has sustained a fair amount of injuries ( to the point where many thought he was too brittle); guys like him are injury prone because their game is based on speed, change of directions, slashing and attacking the rim. The shoes were engineered to provide stability, ankle support and to also facilitate natural motion. They have an incredible court feel due to the very responsive thin phylon midsole ( with built in air units at the heel).  Here is my full breakdown of the Kyrie 3 black ice for further details.

You can also purchase them now from our featured ebay sellers, see listings below

I know I’m killing Curry 3, but when I hit Kids FTL today to pick up a pair of Kyrie 2s FootLocker actually had a Kyrie 3 poster with it. The marketing is so damn good on this project. What is Under Armour doing? Just dropping colors with no marketing or love involved. Frustrating bro.