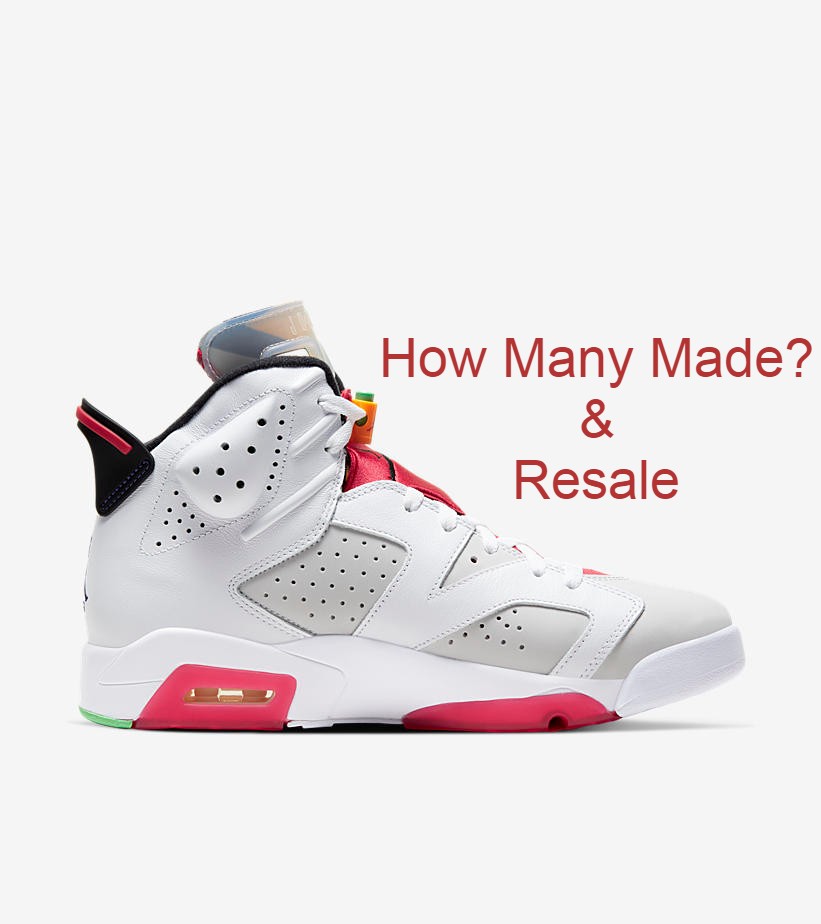 Nike has definitely found a way to reignite folks’ affections for the Jordan retros as of late. The Jordan 13 Flint made its official return this past Saturday and it was a success as I asserted in my projection post. The brand is introducing another colorway of the Jordan 6 on June the 15th, the Air Jordan 6 Hare. This new colorway was obviously  inspired by the Air Jordan 7 Hare originally introduced in 1992 and whose nickname refers to the advertising spot featuring Michael Jordan and Bugs Bunny.

The upper is made of white leather and gray nubuck  with touches of red at the lining and the outsole. Additional details include green, yellow and black on the tongue  as well as purple highlights like the Jumpman at the heel. 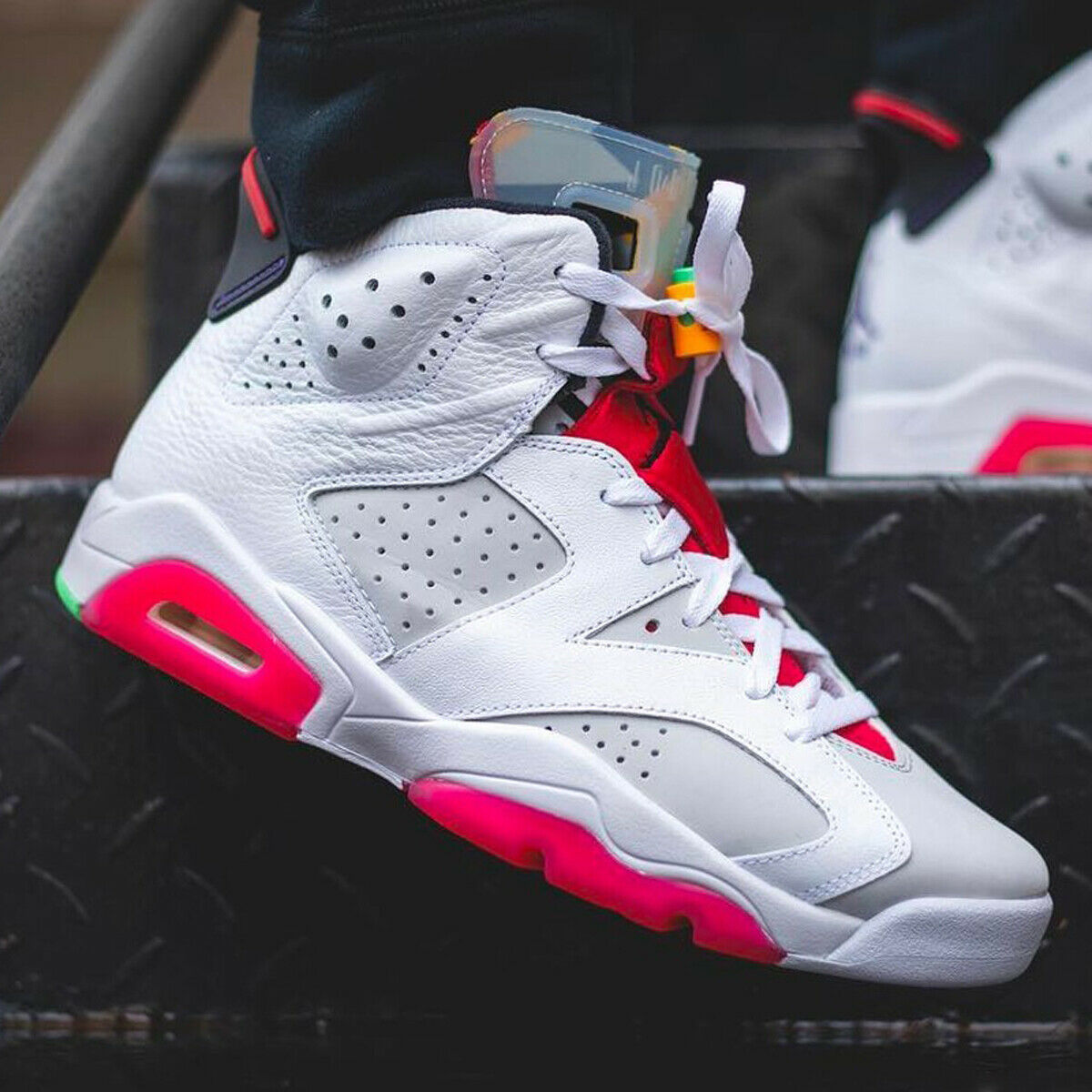 Now let’s talk about the possible number of pairs of the Air Jordan 6 Hare Could Be Made. We’ll follow the same pattern as the of the Flitn 13’s but make some adjustments to it. First let’s quickly take a quick count of the major and minor retailers that would be allocated an inventory beside Nike.

Most of you are aware that because Covid-19, most retailers  are mainly operating through their e-commerce shop. As a result, we’ll treat this release as if the physical locations were still operational as usual and attribute their numbers to the online stores ( in other words the eshop will be given all the inventory the stores would’ve received). We still need to set some assumptions prior to running our numbers, and well use the ones below

1.We’ll assume that Nike will take a 1/4 of the production, Footlocker & Family ( Champs, Footaction) will also receive 1/2 , Finishline, Hibbett and Dicks   and minor chains and boutiques will account for the remaining 1/4. I’m only considering North America in this post ( notice that I didn’t include international locations).

Footlocker’s physical store numbers based on our assumptions: 24 x 730=17520 pairs

And the number of pairs possibly made for North America is : 70,000 x2=140,000 pairs based on our model . But we can stretch this number to 170,000 pairs because of possible errors in our initial assumptions and can conclude that the total number produced will fall within the 170,000 pairs < Number of Pairs Made Wordlwide < 340,000 pairs .

What’s the current Resale Value of the Air Jordan 6 Hare? 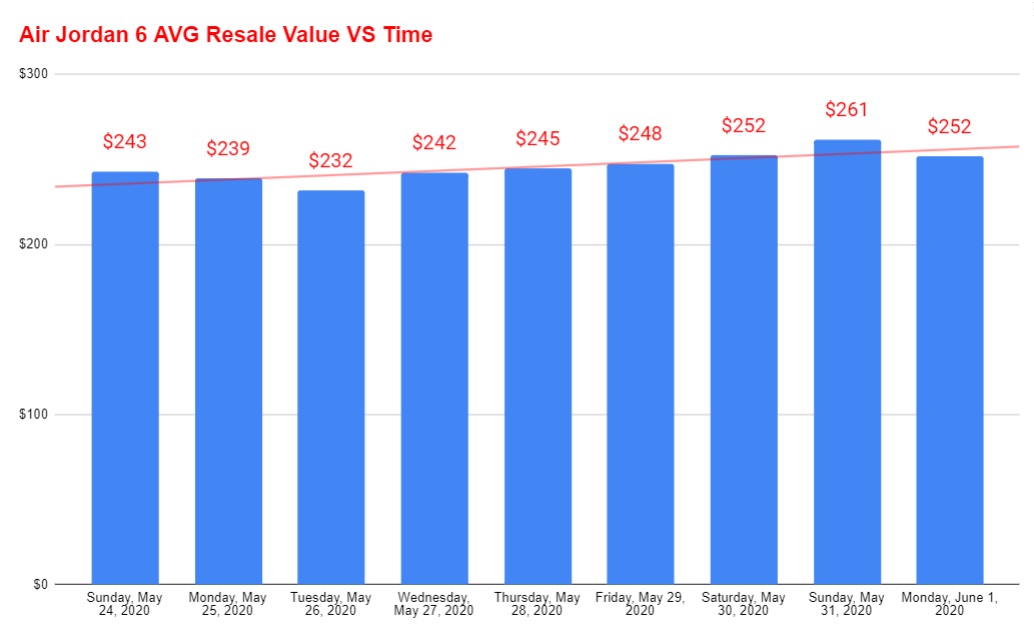 You can clearly see that there is a positive trend with the shoe progressively increasing in value with time. Let’s find the regression line equation to make some quick predictions:

We can also check for the most lucrative sizes. See chart below 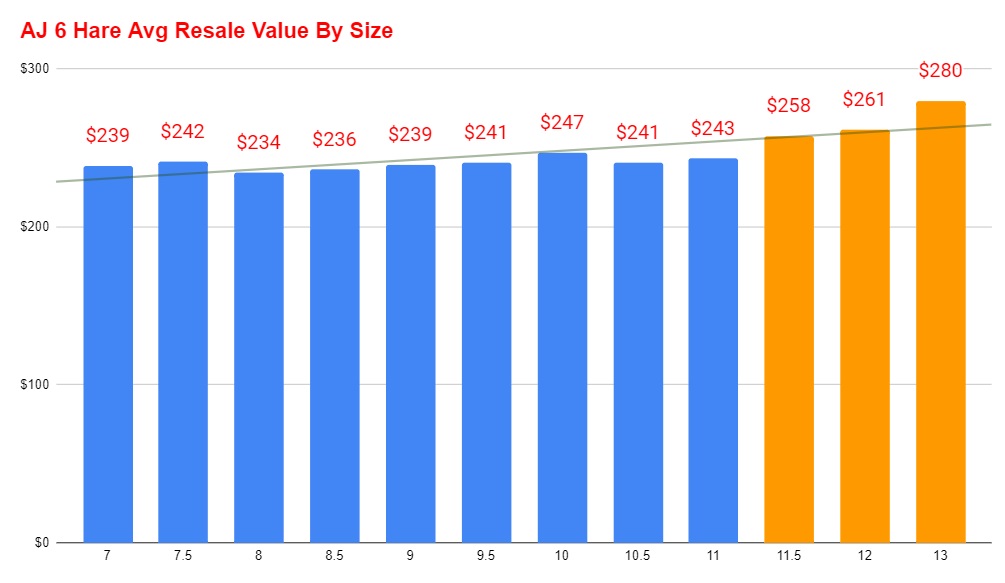 You can clearly see that the bigger the size , the higher the resale value. The highest recorded sale was for a size 13 at $280 and the lowest sale was for a size 7 at $239.  The shoe retails for $190 before tax and roughly $202 after tax. Folks are looking at profit margins between ($16 and $60) based on the chart above. But like I said earlier, it will not be surprise if prices once the shoe is released hit the low $300’s. So my verdict on the air Jordan 6 Hare is- definitely worth purchasing worth any purposes i.e wearing or reselling. And this shoe will definitely sell out on release day.