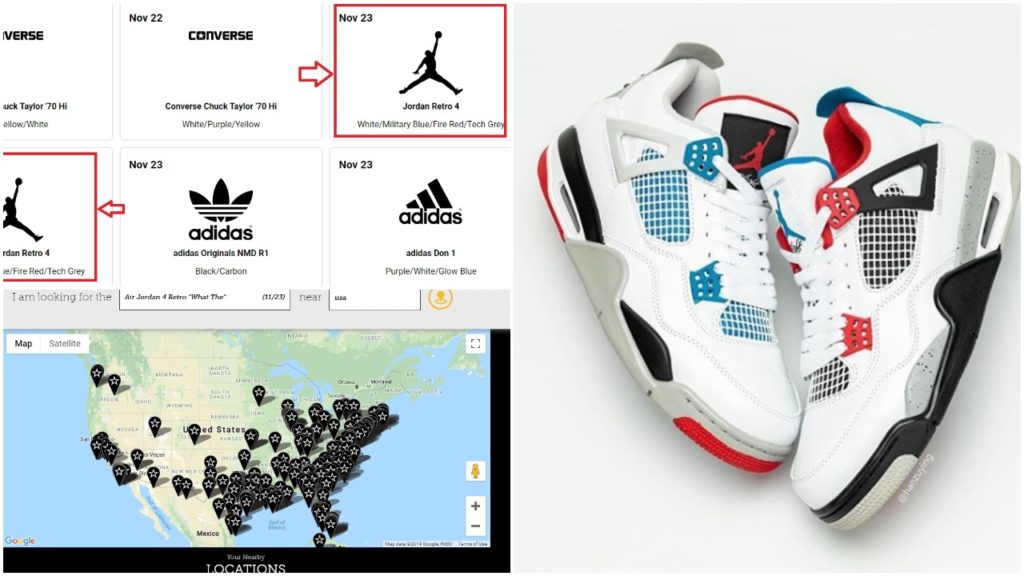 A couple of days ago, I shared a post about the Air Jordan 4 “What The ” being available early for purchase, see link below

As I was looking at  the sales records of the early transactions of the shoe via eBay, I knew right away that they were massively produced. It was confirmed when I went to my local mall and one of the retail managers told me that their location was going to be carrying the “What The 4’s” comes November the 23rd. It’s definitely a great time to be a collector when it comes to General Release sneakers; the abundance of options makes it easy to score a pair. Not only that but discounts can be also used and with patience, one can get a GR sneaker anywhere from 10% to 20% below its retail value as early as a day or two after the shoe drops.

I investigated by a process of deduction what stores would be allocated and nearly every possible retailer you can think of will carry this model in mens and kids sizes. But it’s imperative that I back up the claim with some form of evidence. Per my inquiry, here is the list that I came up with:

Confirmed major retailers: Nike, Footlocker, Champs, Footaction, Finishline, Jd Sports, Hibbett, Dicksportinggoods and all these stores will also include their online shops. We’ll also have to add Eastbay as well.

Let’s quickly see what Footlocker, Champs and Footaction have provided for us via their release calendar/locator.

Anytime a shoe shows up on Footlocker’s main release calendar, the inference that can be made is that the shoe will be available in nearly all footlocker stores. The Kyrie 6 “Preheat” collection isn’t on the main release calendar but you’ill find it on the launch locator map ( thus indicating how limited the shoe is). Footaction webmasters are definitely up to date when it comes to refreshing the information on their website. The “first come first served” procedure will be used in all Footaction stores, so that is another confirmation that the shoe will be available in substantial numbers. Now let’s set up our assumptions:

1.Based on the information above I’ll assume that Nike will take a 1/4 of the production, Footlocker & Family ( Champs, Footaction) will also receive 1/4 , Finishline, Hibbett and Dicks will split another 1/4, and minor chains all together will account for the remaining 1/4. I’m only considering North America in this post ( notice that I didn’t include international locations).

2.We’ll also assign an average of 18 pairs per FTL store, 12 per FTA and Champs store; and lastly we’ll give the online stores about 1/3 of the total the physical stores are given.

I usually write about the market value and tie it up to this post but I’ll create a different section for that, be sure to check the post below for that