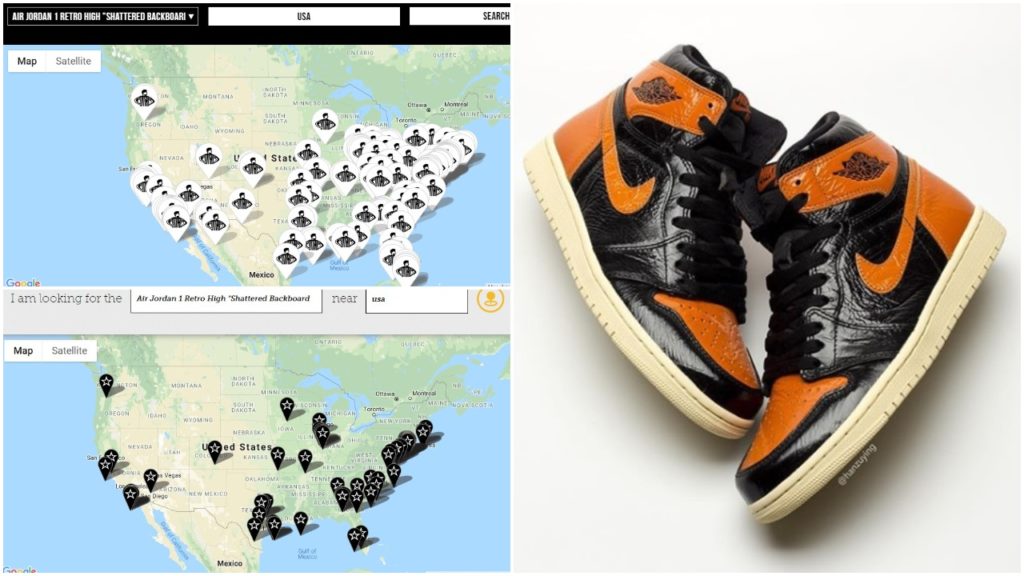 The Air Jordan 1 Shattered Backboard 3.0 is releasing on Saturday October the 26th and folks are definitely looking forward to snatching a pair for various reasons, some to add to their collection and others for monetary gains. My job this morning is to come up with a believable estimate of the possible number of pairs produced. I was going to create a linear model based on the last two pairs of Jordan 1 Highs that dropped i.e the Obsidian AJ 1 and the First Class Flight AJ 1 , but I realized there was a model breakdown once I looked at Footlocker’s release locator map. So I was compelled to go the archaic way; before I set up my assumptions let’s quickly get a count of the number of  North America’s retailers that will be carrying the shoes.

So far, these were the only local retailers that were confirmed; to get our numbers we’ll lean on Footlocker and Footaction’s data, see pictures below ( by the way Champs will not be receiving any inventory)

As you can see  from the images above, the number of physical stores allocated from both entities is lower than usual. There is a total of 895 operating FTL stores and only 135 were allocated ( that’s about 15.1%); there is an average of 262 FTA stores and 65 were given an inventory ( that’s about 24.8%). And the launch procedure for all the stores will be the “reservation app”, hence the shoe will be extremely limtied. Now let’s create our assumptions,

-Footlocker, Footaction  will receive about 1/4 of the entire US inventory

-Each physical location will receive an average of 24 pairs ( I know that some stores may receive close to 70 pairs but those are rare cases) so we’ll stick to 24 pairs.

And it’s safe to say that the Grand Total would be 24,000 x 2=48000 pairs( I’m assuming that the rest of the world will get just as many pairs as North America’s total)

I was going to lean on eBay and Stockx’s data to get an idea of the market value but I chose to not include eBay this time because of the amount fakes currently circulating on there, I wrote a post about that see link below

So that leaves me with StockX’s only so let’s see how much the sneaker is currently selling for,

The average sale price is in the low $400’s for a 133.8% mark up, at this point you can draw your own conclusion about the profit associated with buying and selling this shoe. Obviously the smaller sizes ( sz8-10) will bring in  the maximum profit possible ( zero in on the red squares on the left).

The Air Jordan 1 Shattered backboard 3.0 is certainly going to be hard to come about and the shoe will continue to gain in value as time progresses. It’s without a doubt a great short term and long term investment for those looking to capitalize on it.

You can buy now on StockX-CLICK HERE