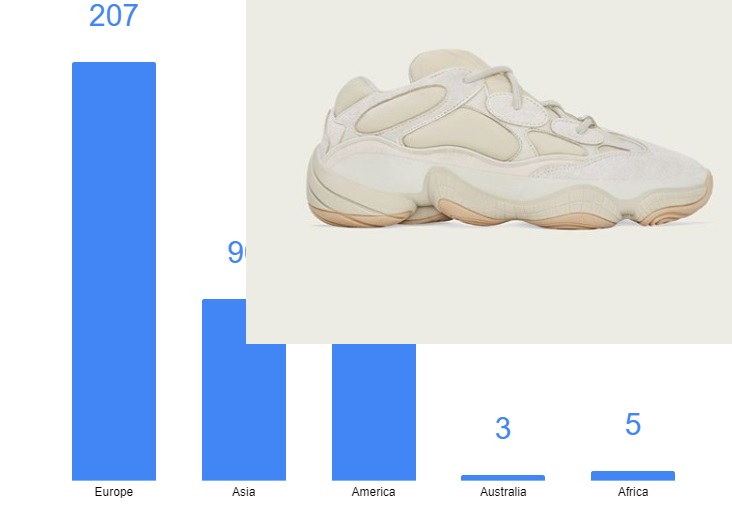 Adidas has been dropping some gems especially in the NMD silhouette but because Nike has so flooded the market, a lot of releases from the brand go unnoticed. I’ve written several projection posts on Jordan retros in the past couple of weeks and today I made a conscious effort to turn my attention to the Adidas Yezzy 500 Stone edition. I spent a considerable amount of time collecting my data from Adidas’s website via the Store Finder and other resources online. The charts below will show you the number of stores allocated per region. 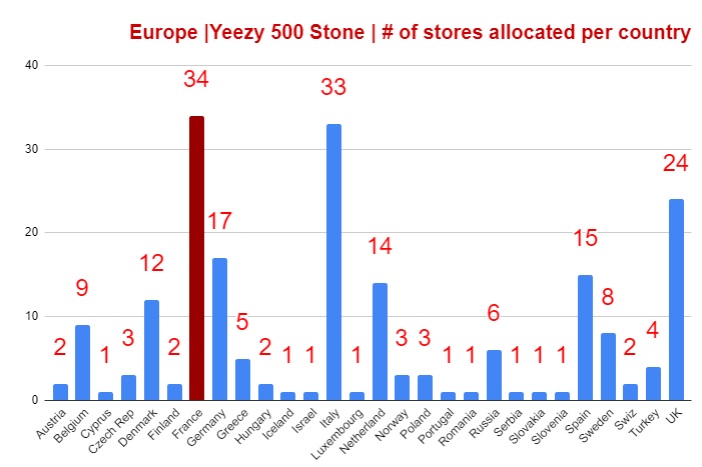 France is leading the charge in Europe with a total of 34 stores given an inventory. Italy, Germany and the UK stores were also favored based on the chart above. We can draw some quick inferences i.e. adidas sneakers probably sell a lot better in France, Italy and the UK more than any other countries in Europe. Next we are going to look at Asia. 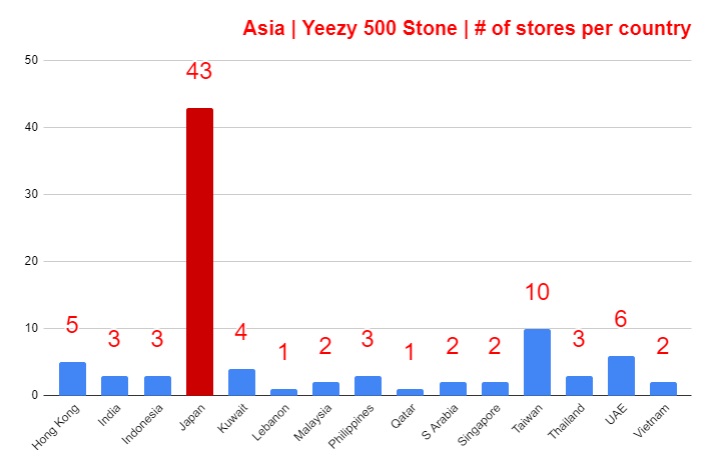 Japan has completely trampled every other country in Asia with a total of 43 stores allocated. That shows the importance and the value of the “Japanese Sneaker Culture”. It’s always good to make those observations, brands have to understand where they are wanted and serve those regions the best. 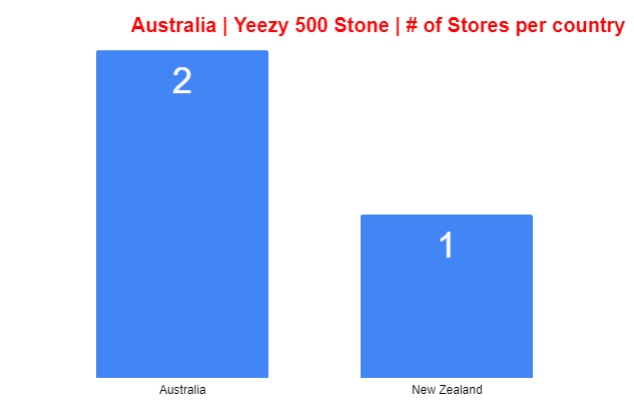 Only a total of three stores were given an inventory in Australia and New Zealand, you can draw your own conclusion about the love of the trefoil in that particular part of the world. 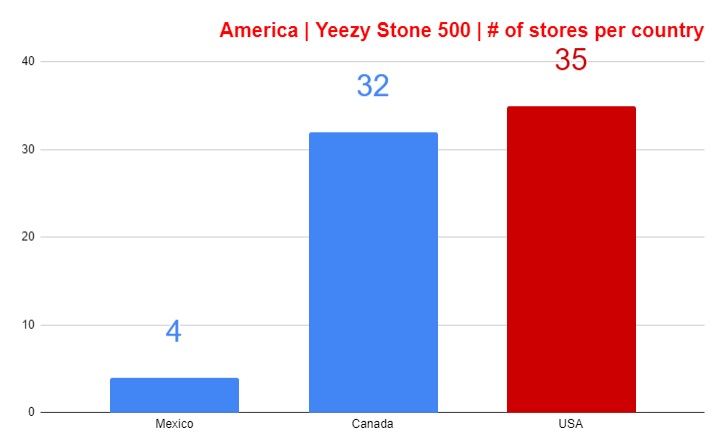 The USA is slightly ahead of Canada with a total of 35 stores allocated based on my findings. The Store finder only showcased 14 stores but didn’t include Footlocker and several sneaker boutiques. So my investigation led me to another 21 stores. 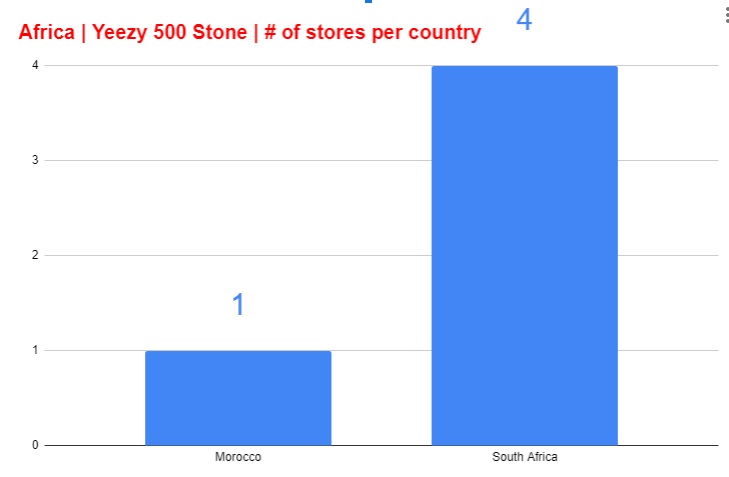 A total of 4 stores in South Africa were allocated and no western African country was given any inventory. The shoe retails for $200 and folks in those regions cannot afford this type of frivolous expenses (which makes perfect sense). The Yeezy 500 “Stone” is a luxurious commodity and it would be great if the proceeds of these sales could be delegated to help Feed the hungry ( folks in the western world have been financially blessed and ought to be held accountable). I know I’m going off topic here but it needs to be said, scriptures say that,

The generous will themselves be blessed, for they share their food with the poor.

Now let’s set up our assumptions and run our number since we know the average number of stores allocated. I put all the information into one chart so it will be easy to see the total number of stores worldwide. 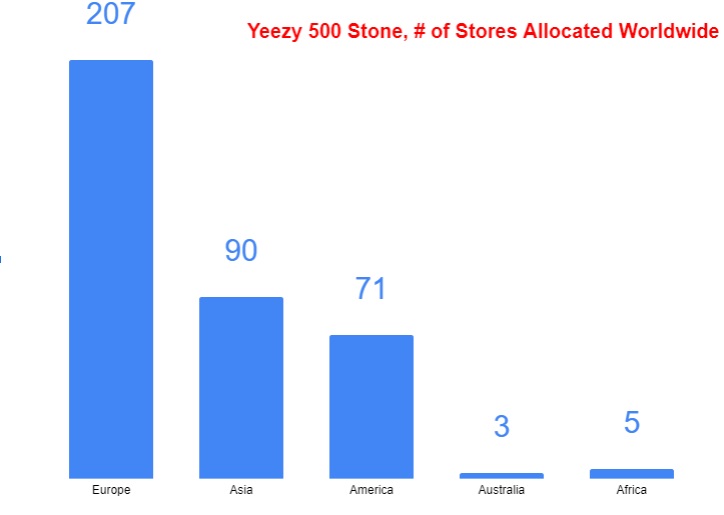 I collected and my data and  the histograms below will show you the findings. 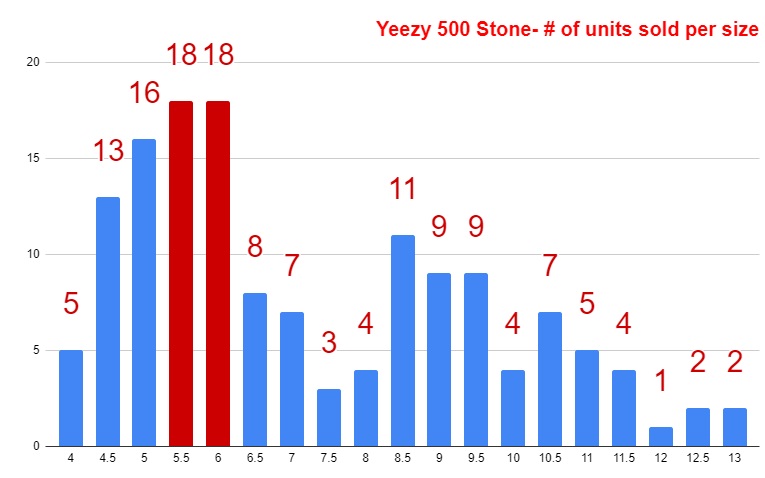 Sizes 5.5 and 6 are the highest on demand thus far; sizes 12 and above are not really sought after. The main observation here is that smaller and mid sizes are going be the selling the quickest since the average human foot falls in those categories. Now let’s see what the average resale value is per size.

The highest selling sizes are 7,12.5 and 13 and though the 12.5 and 13 sold are not on demand, they sell the highest since those sizes are harder to come by. You can look at the average for each size and make your decision what you see. The overall average resale value if we take every single entry into consideration is : $280

Should you buy to flip?? The Adidas Yeezy 500 Stone cost about $200 before tax and $212 after tax if you reside in the state of Maryland. Your basic selling fees include paypal ( about 4%), StockX ( about 9%) shipping ( if you’re selling the shoe on eBay), and eBay fees ( 10%). Let say your selling fees are roughly 14% ( and I’m being generous since I didn’t include shipping)