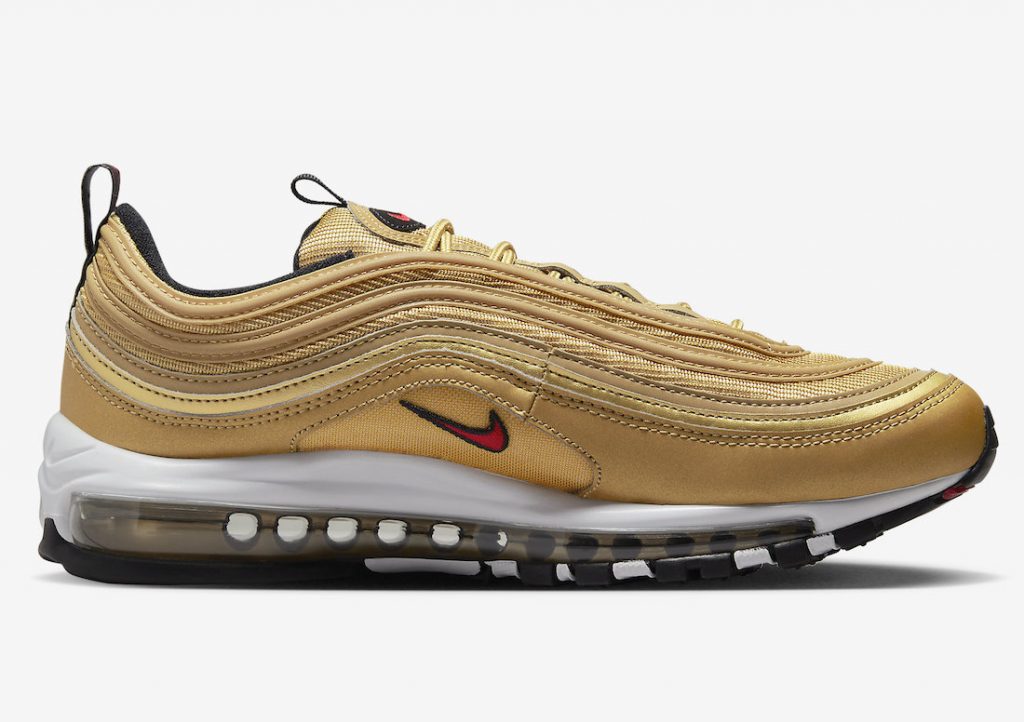 Tt’s the shoe that just won’t quit. Over two decades since its debut, the Air Max 97 remains a staple in the sneakerhead world. From its sleek design inspired by Japanese speed trains to its modern-day relevance, it’s no surprise why these kicks have been so beloved for all this time. This time around, Nike is revisiting their classic silhouette and giving us a blast from the past with their latest rendition of the 97s – the Nike Air Max 97 Gold Bullet.

The Design
The shoe is dressed in a Metallic Gold, Varsity Red, White, and Black color scheme. The upper consists of Metallic Gold mesh and leather with Varsity Red branding and 3M reflective detailing. This is all set atop a White midsole with a Black rubber outsole.

The History
The Air Max 97s were first released back in 1997 when they quickly gained traction as one of Nike’s most popular silhouettes ever. They were designed by Christian Tresser who worked on various other silhouettes like the Air Max 95 which made him famous worldwide as one of Nike’s top designers. The incredible air cushioning system was also revolutionary at the time – something that made these shoes so comfortable to wear while being fashionable at the same time. They even went on to be named “Shoe of the Year” in 1997 by Footwear News Magazine due to their wave-like design that was inspired by Japanese bullet trains and their sleek aesthetics. Since then, the 97 has become an integral part of sneaker culture and continues to be one of the most sought-after shoes today.

If you’re interested in picking up a pair of the Gold Bullet, refer to the details below

Where To Buy The Nike Air Max 97 Gold Bullet

As you can see from the chart above, the highest interest for the shoe occurred between January 30 and February 5 of 2022 ( a score of 75/100). The shoe reached its maximum peak in interest between October 9 and October 15 ( with a score of 100/100). But for the most part, there hasn’t been that much interest. The past 30 days have seen a score of 0/100, basically no interest at all. The ratio between the demand and the supply on third party marketplaces is about 38/56 ( with the supply exceeding the demand by 32%).

The current sell through rate is about 3.4% ( which is significantly below average).

The current average sale price of the shoe is about $298, and this is a result of a small sample size of two sales, which isn’t very reliable. The overall average sellers’ asking price is about $242. There are about 38 offers on it ranging from $25 to $180 so I chose to disregard any offer below $130. If that’s the case, it reduces our number of reasonable offers to 4, with an average offer of $142.5. So the projected resale value based on the average buyer’s offer and seller’s offer is about $192.

At this price , you’re looking at a $21 loss. The Air Max 97 Gold bullet isn’t a shoe I would recommend at all for day traders or even as a long term investment. It just won’t be a wise investment.

If you’re a buyer, do not pay over retail for this shoe. I’ll encourage you to exercise a bit of patience and you’ll be able to get a pair for 5% to 15% below the retail price.