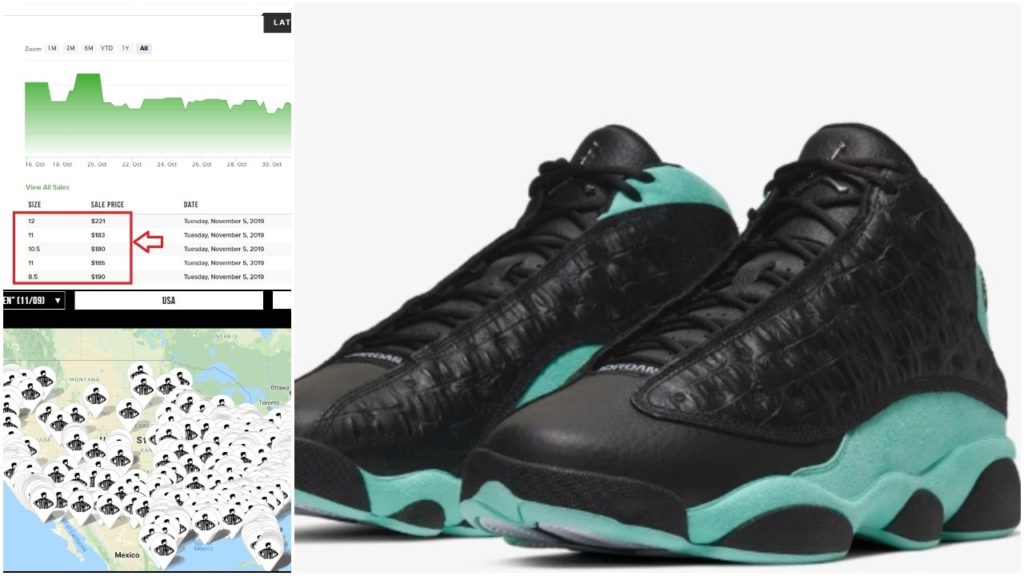 I was going to write another extensive projection post on the Air Jordan 13 XIII Island green but a quick glance at Footlocker’s release map stopped me in my tracks. What I’m trying to say is – the shoe will be available in substantial numbers and folks shouldn’t have problem scoring a pair. As a matter of fact the Jordan 13 Island Green is already being sold on StockX under retail, which means retailers are probably going to have a difficult time moving these shoes off their shelves.

Zero in on the red box and you’ll see the latest sales recorded on StockX: $180, $183, $185, $190, $221. There is only one size 12 that sold above retail and I’m not sure how major and minor retailers are planning on convincing their customers to buy the sneaker from their respective stores if those buyers can easily snatch it from third party merchants for under retail. Once again I’ll throw in the “outlet theory” – Nike has probably put this shoe out only in hope that it will eventually be returned via the RTV system so it can be sold in Nike’s own outlet locations where the profit margin will be better. You can read my post below that explains the RTV system in detail

Nike is releasing too many sneakers within a short time interval and customers’s options are limitless hence no rush to pull the trigger on any commodity unless it’s limited. From Thursday November the 7th to Saturday, November the 9th, the following sneakers are releasing and their price tag range from $120 to $200: Jordan 8 Retro N7, Jordan 34 Eclipse, Air Force 1 N7, Olivia Kim Collection, Foamposite one Shattered Backboard, Jordan 4 Pony Hair,Jordan 1 Mid Blue The Great, Jordan 13 Island Green. Now you see why retailers are in bad shape, the market is extremely flooded and consequently the demand will plummet. Let me show you a picture of the Footlocker’s release map

Since this is a General Release, I’m assuming that all the 895 FTL stores within the USA are going to get the Air Jordan 13 Island Green. If we assign 18 pairs per store ( some stores may get up to 70 pairs but for the sake of accuracy we’ll stick with 18),

That’s not even counting Champs & Footaction ( in stores and online), Eastbay ( online), Footlocker ( online). And I still haven’t included all the other major and minor retailers, I’m sure we’ll easily get to 200,000 pairs produced If I were to be more thorough. The bottom line is the shoe will be available in massive numbers and as a customer I would wait till it hit the sales’s rack before making the purchase.

Those that insist on buying them now have the options below