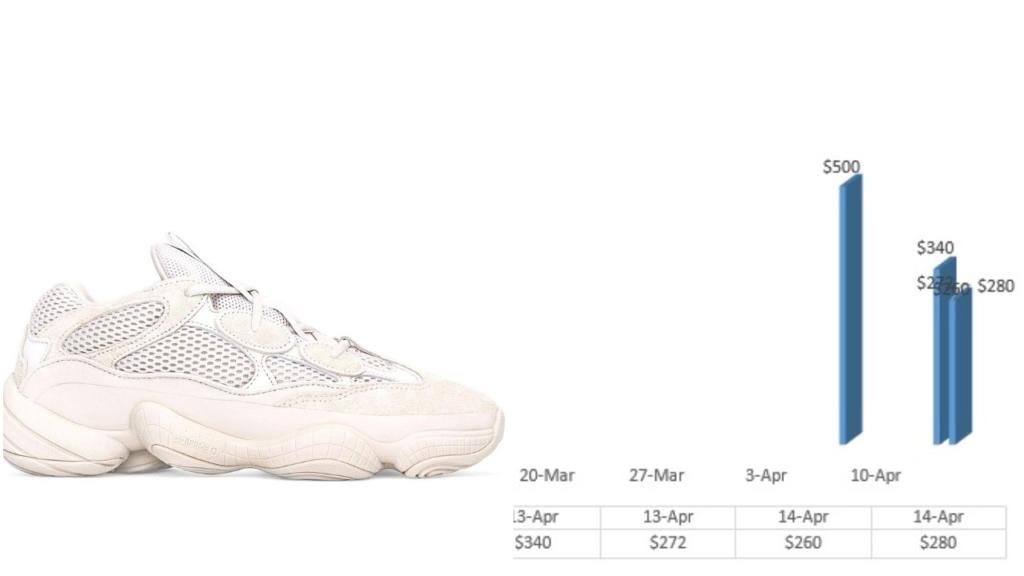 I didn’t even know that the Adidas Yeezy 500 Desert Rat was releasing this Saturday. I found that out when I was looking for the release date of the Low Top cool grey 11. That is an indicator of how slowly but surely certain Adidas sneakers are becoming irrelevant. That led me to study the performance of the Desert Rat on third party marketplaces like eBay. I collected my data from recent sales and I broke it down by size.

You can clearly see that the price has decreased considerably between March and the release date. The rate of change of the price within 43 days is $10.83 or $11 , so the value went down by $11 every day since March. I think it will remain at $260 for quite some time and may eventually rise up again for when it comes to the size 5.

size 5,6.5,7.5, 8 and 8.5 will not be included in this report since the number of sales recorded isn’t sufficient for me to build a strong case

We have somewhat of a similar scenario here as well. The price has been decreasing steadily and it will probably will stay range between $260 and $280 for a while. It might go up within 6 months, I’ll be updating this post.

This one is a bit tricky, there is no consistency with the price changes but it’s definitely decreasing and is currently staying constant at $330.

One thing is for sure the price of the Adidas Yeezy 500 Desert Rat is decreasing with time. It probably remain at $300 for the next couple of months and might even go further down later. What is causing this? Maybe folks are just not interested anymore in Yeezy’s or  the shoes are overpriced. Let’s not forget that this Saturday Nike released a lot of sneakers i.e OG shadow 1, off white vapormax

, Kobe Protro. So Adidas might have to rethink its release strategy as far dates are concerned.

I’ll be interested in knowing what your thoughts are on this.