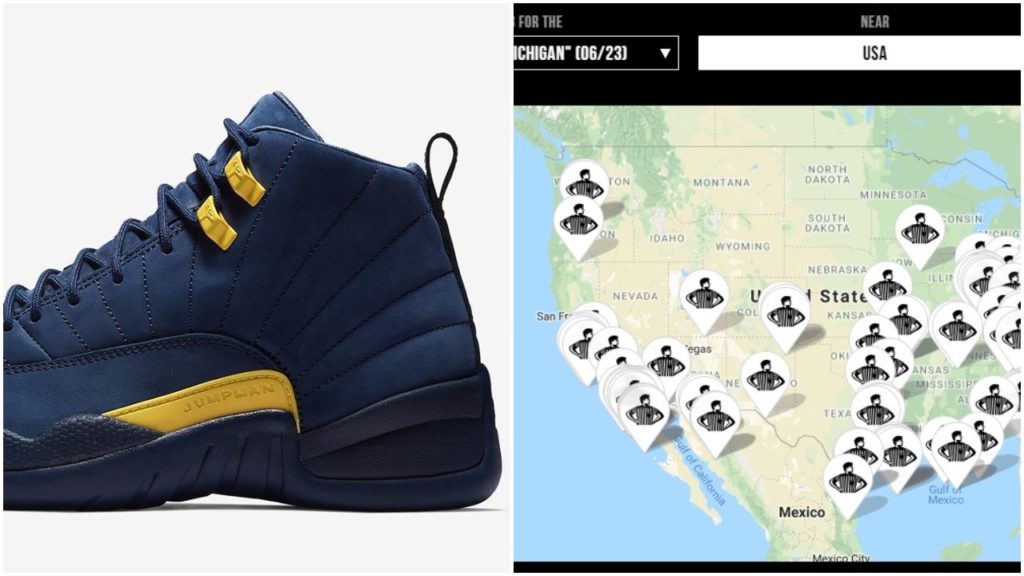 The Air Jordan 12 Michigan is officially releasing on Saturday June the 23rd. Nike has been all about business this year, sticking to the 2018 Edit To Amplify campaign- give people what they want even if it means releasing exclusives to the general public. This post is my attempt to figure out how many pairs of the shoes were produced; as usual I’ll be making some initial assumptions to make the predictions easier.

. Footlocker and its derivatives are allocated about 1/4 of the entire inventory

.Footaction, Champs  receive about a half of what FTL is given

.FTL online receives about half of the inventory the physical locations will receive ( and the initial assumptions will apply to FTA, Champs and Eastbay online)

. The hardest part is the number of pairs per store ( I’ll say 12 pairs since they are a bit limited).

There are about 131 FTL stores that will receive the shoes ( probably House Of hoops) and since I said each will receive about 12 pairs, let’s run our numbers:

so FTA, Champs together will received about 1300 pairs ( online and in store combined based on our initial assumptions and the Total from FTL and derivatives is= 2500 + 1300=3800 pairs of let say 4000 pairs.

I’ll start with eBay’s prices because they are publicly verifiable. I recorded about 13 sales ( and they occurred between June 13-17) ranging from $309 to $500 for bigger sizes. The average selling price based on the recorded sale is :

StockX’s results of of today are summarized in the picture below. Their average is about 18% higher than ebay’s average. I’d rather buy these shoes via StockX since they authenticate them ( it’s much safer).

The shoes are obviously limited and the current resale value agrees with my earlier prediction. I do think the $225 price tag is a bit too high considering the fact the shoes aren’t any different from the other pairs ( material wise). The only difference here is that they come in a special box ( still cardboard with a collage of images on it) and I don’t think that alone will cost an extra $35 ( Jordan 12’s are usually  priced at $190). The price increase is definitely not justifiable but JB can get away with it.

You can also purchase them on eBay from our featured sellers, refer to the listings below