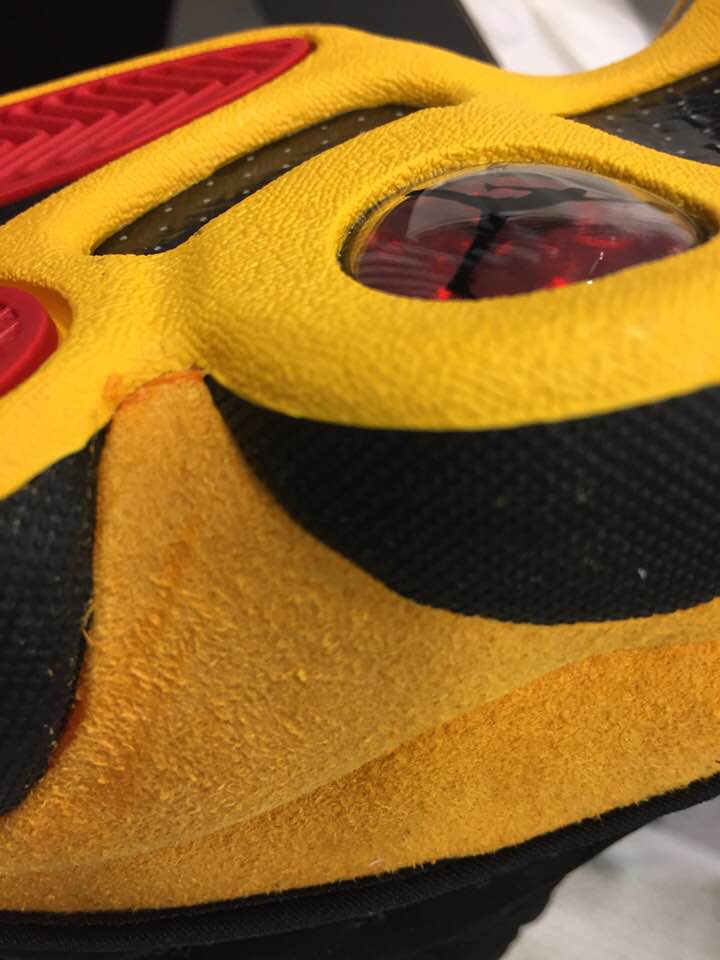 I was in my local mall on Tuesday trying to get a head start for the Pine Green Jordan 1 releasing on Saturday, and what started as a frivolous stop led me to very interesting discoveries. For the sake of protecting the individuals I conversed with, I will refer to the retailers in the story as store X and Y and so forth. I was in store X and asked one of the employees whether they still had the Jordan 13 Melo in stock to which he responded yes. I proceeded to ask him what they were going to do with the shoes and obviously they are sending it back to Nike via the  RTV ( return to vendor) system. I then cast my line a little further and asked him if he could bring one of the pairs out and show me the flaws. And he went in the back brought the shoe out and pointed out the flaws which you see in the pictures below. Basically it was an awful glue that was used that caused the edges of the sneakers to turn red within a short period of time.

The employee in his zeal proceeded to leak an information about store Y whose manager sold a considerable amount of the Melo 13’s through the backdoor prior to receiving Nike’s cancellation email. That confirms what I was told a couple of days ago about Nike possibly doing a random shake up of its distributors .. mind you the cancellation wasn’t announced till Friday afternoon; it seems very odd to me that Nike will wait this long to make such a drastic decision. The brand wasn’t dumbfounded, this was purposely done to fish out stores with shady practices.

Those who got them early are going to get their account holders in trouble especially if Nike reps request an rtv. This might get interesting

But that’s not just the only reason for the cancellation. I also mentioned in one of my previous post that the Jordan 18’s release date overlapped with that of  the 13’s and the 18’s would have been overshadowed so Nike used this opportunity to kill multiple birds – fish out retailers with deceitful practices, stimulate the sales of the 18’s and there is another reason that came to mind as I thought this through, it is more subtle: the  DTC (direct to consumer) campaign.
Think about it for a second, where do you think all those 13’s are going to end up? At the Nike outlets of course. And how much are the outlets going to price them at? Possibly $150 or $160 with a B grade stamp. Now let’s consider something else, how much are retailers like Finishline , Footlocker paying for the 13’s on the wholesale basis? I will suggest $90 to $110. Let me also add this, Nike has already been paid for these shoes so even when an RTV occurs, the retailers only get a credit for their future purchases. So basically Nike is not forking out any money; now comes the punchline- Nike is directly selling these shoes to the consumer for $150 or $160 (basically $40+ more ) which is more than what they would have sold it to the distributions channels i.e FTL,Finishline. The implication here is  that Nike doesn’t really need a middle man to sell  their sneakers but because the middle man is paying for the inventory then  it’s a smart move to keep  the major retailers happy for that sake. It’s a win win for Nike, whether the shoes are flawed or not Nike is still winning on so many aspects. The brand is still to going to gain a lot more customers once these Melo 13’s hit the outlets, folks are going to jump on them and you better believe that it’ll be major news on sneaker blogs, which means more exposure for Nike. While this may work in the favor of major retailers, I don’t think the minor retailers have the luxury of relying on the RTV system so I’ll be interested in monitoring what happens when flawed sneakers are also given to minor retailers. Do they get the same treatment? Only time will tell.