The Jordan 11 Low Snakeskin dropped this past Saturday and I did a bit of intel gathering a couple of days ago to see how well the shoe was performing in retail stores. I only visited three retailers in my local mall and each store still had a full size run available in stock. I probed a couple of employees via DTLR and to my surprise and theirs only one pair had been sold by noon. That’s not what I predicted, I was expecting only scattered sizes to be available by noon but that was not the case. Footlocker also made the colossal mistake by making an app-reservation for this model and it backfired-folks didn’t get out to pick up the shoes they won via raffle. Check out the pictures below and tell me what’s wrong with what you see

Prior to release Date: By April the 17th 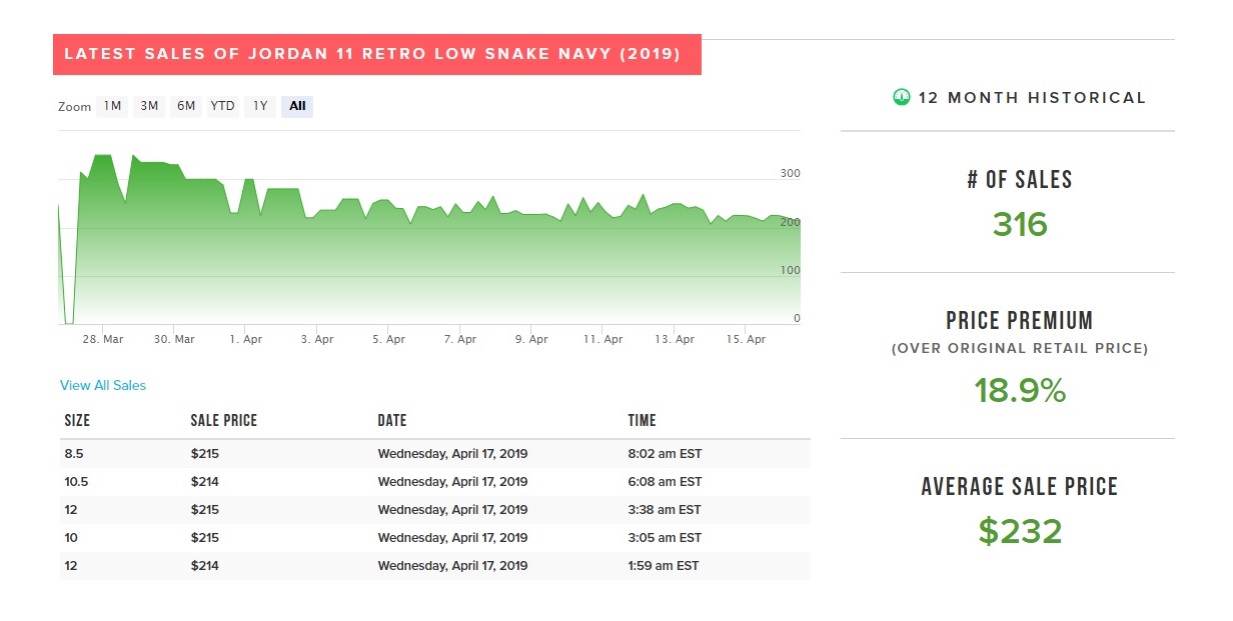 On April the 17th when I wrote my post, an average of 376 pairs were sold on StockX and today when I checked, 1076 have been sold ( that’s an additional 700 pairs). The average price went from $232 to $202 and you can see from the picture above that most common sizes are selling for $170+ ( about $10 below retail) which explains the substantial amount of sales recorded. Buyers know they can get their hands on these shoes via StockX because they have a lot of control over the price. And what does that mean for retailers?? Bad news hence why the shoes will be collecting a lot of dust on retailers shelves for weeks. Retailers are fighting a battle they can never win because the third party marketplaces control the narrative to some extent. Marketplaces like GOAT, StockX do not have to abide by Nike’s rules; they can allow their users( sellers) to sell their sneakers prior to their official release date at any arbitrary price, and that’s a luxury retailers can’t afford. And the same rule applies once the shoe is released ( meaning the sellers are allowed to sell at below retail). Nike even made it worse for major players like Footlocker, Champs, Footaction ( because buyers aren’t allowed to use any coupons on Jordan 11’s which means more terrible news for these chains).

I wrote a post a few months ago in which I said retailers will have to offer more than just shoes to survive in the current market; and every shoe that releases only reaffirms my earlier assertion. Check out the post below to read about it

I’ll encourage folks to not even buy the Jordan 11 low snakeskin now; I’m sure they will be available for purchase for 25% below their retail price in about 20+ days so be patient.