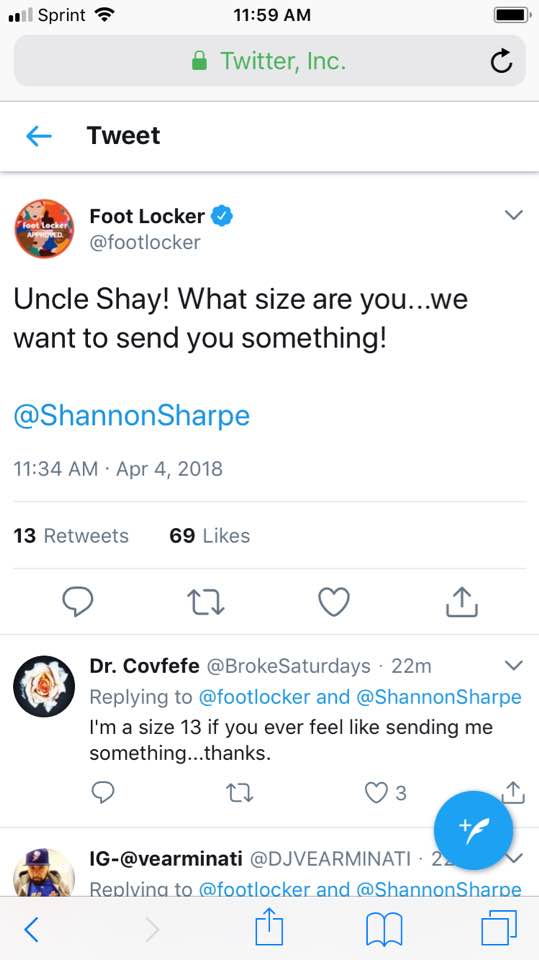 9shares
I was a bit apprehensive about writing this post but I had to do it because Footlocker’s tweet struck a nerve in me. Many might not understand the frustrations behind it because they are not in our line of work. I’ve collected shoes, I played basketball and still play basketball, I was and am still a  reseller to some extent, I’ve written several objective sneaker posts pertaining to what brands and stores can do to generate more revenues and retain customers. This morning as I was checking my Twitter for private messages I might’ve received , I came across the following tweet from Footlocker, see picture below
My initial reaction when I saw the tweet was: are you kidding? Did Footlocker just send out this very unsual tweet? Many brands and retailers are driven to celebrities or influencers  for instant gratification and in the process short circuit their longevity. Mr. Sharpe was recently spotted shopping for sneakers with Complex, Click here to see the video via Youtube. Why am I mentioning this? All this is showing me is that Footlocker doesn’t have a solid plan for acquiring consumers. The company basically reacts to what it assumes the consumer wants. In this case, FTL is assuming that since Complex featured Sharpe, he is probably trending so let’s offer him some free sneakers, put it on social media and hopefully it’ll get us some followers and sales . Sharpe can afford the sneakers to begin with and there is a reason why he went to Flightclub instead of Footlocker. He’s looking for exclusives which most retailers don’t have. Chris Rock said it best,

Retailers turn to celebrities  in hope that they will generate some sales for them via tweets or Instagram posts. It may work for the moment but there is no customer loyalty/retention that comes with it. Yes Footlocker’s website may get a surge in traffic for a day or two because of Sharpe but how many of those individuals are going to come back after a week or two. The problem with retailers is that they haven’t invested in a system that compels people to turn their smartphone and type footlocker.com first thing in the morning. So they have to revert to pitiful methods such as the Sharpe’s tweet. Am I hating ? Absolutely not but what is deplorable is that a company of this magnitude can’t figure out how to gain and  retain customers without a celebrity’s help. Nike uses  celebrities but they aren’t  the focal point of the brand’s marketing. The swoosh has created quality materials that pushes the consumer to want to check their platform on a daily basis. They even went as far as creating a new site air.jordan.com. But retailers like footlocker are only doing one thing, creating more online shopping stores devoid of quality materials i.e. champs ,Eastbay, Footaction.
The FTL’s VIP program is a great incentive and I appreciate the fact that I’m sent $25 off on a $100 purchase on my birthday. But it means that I still have to spend money for me to benefit from the store. What I’ll suggest is that management check the sales report to select the customers that spend the most money at FTL and periodically give them a stimulus that requires the consumer to spend zero dollars i.e send them a free shoe.
The last time the FTL Unlocked was updated was December 23rd in a meaningful way. That is not acceptable and it shows me that the company doesn’t care about engaging the consumer. They’d rather spend their time on social media instead of creating a  real footlocker community where they can actually interact with their fans/customers.