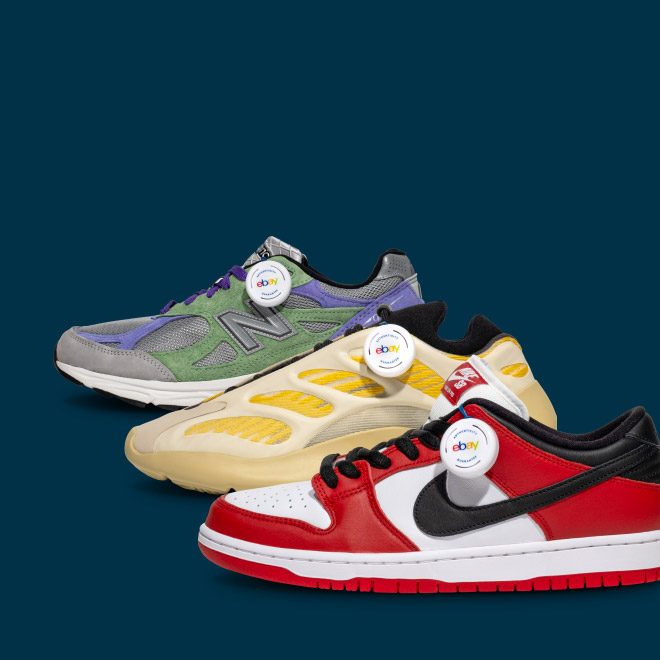 eBay certainly has an unqualified team of authenticators, they are atrocious. This is not me just babbling for no reason; it is factual. I recently sold a preowned pair of the 2013 Air Jordan 4 Fear Pack on eBay for $399. The shoe was authentic of course, yet to my surprise after receiving the sneaker, eBay’s authentication team sent me an email to tell me that my sneakers were fake. I was flabbergasted, one of the main functions of my website is authenticating sneakers. So I was so annoyed with the email that I just had to laugh about it. Here what was sent to me, and I’ll elaborate it in the following paragraph,

I want you to zero in on the last phrase” See additional notes from our authentication partner.” I looked for the additional notes and couldn’t find any. And ladies and gentlemen, this is why I said that ebay has an unqualified team of authenticators. When I receive an authentication request on my site, I check the sneaker that I’m supplied and, if it turns out to be a fake, I offer the consumer  a complete report detailing the sections that failed the examination. Let me give you an example from a recent request ( authenticating a pair of Nike Dunk Low ) 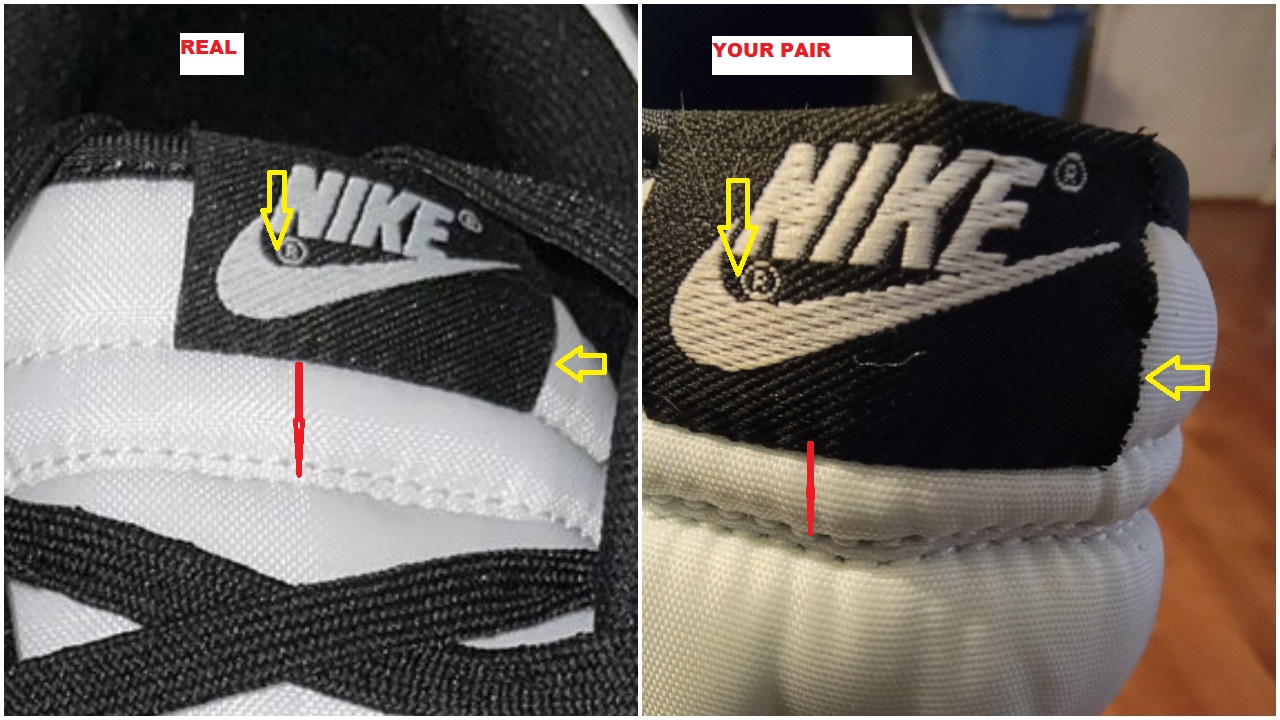 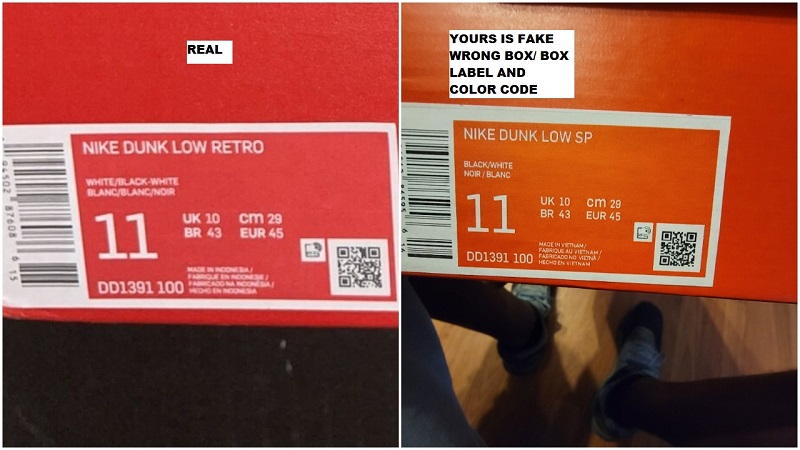 I sent the pictures above to the customer with the following report:

threads: check out the loose threads at the edges ( see yellow arrows).

Tongue:  look at the gap between the tongue tab and the bottom threads, the gap is wider on the legitimate pair.

Box: Your pair has the wrong box and label

The report is detailed, and the consumer understands why his or her footwear failed the authentication test. eBay’s authenticators made an arbitrary judgement and couldn’t explain why they thought my Jordan 4 Fear Pack was not legitimate. Coming from a huge brand like eBay, or should I say Sneakercon, this is quite unprofessional ( since they are the ones doing the authentication). I believe the issue stems from the shoe’s production year. These authenticators, in my opinion, lack the necessary knowledge to authenticate anything produced prior to 2013. I believe that Nike’s use of RFID and QR codes on its sneaker boxes has really aided the sneaker community. However, you can’t merely look at a shoe’s packaging to see if it’s genuine. An authentic box can be used to house a phony sneaker. As a result, eBay’s failure to authenticate creates a slew of problems. What method do they employ to inspect the footwear that they receive? In the last two years, eBay boasted about certifying nearly 2 million pairs of sneakers. I’m curious about their success or failure rate. I’m quite dissatisfied with how they handled the sneakers I sent them. This comes dangerously close to defaming me, and this has certainly infuriated me. It’s almost like if you took your car in for an inspection and were informed it didn’t pass without being told why. This was a judgment made on the spur of the moment because the authenticators had no idea what they were doing. For this reason,  it is fitting that I show them how to authenticate a pair of 2013 Fear Pack Jordan 4. 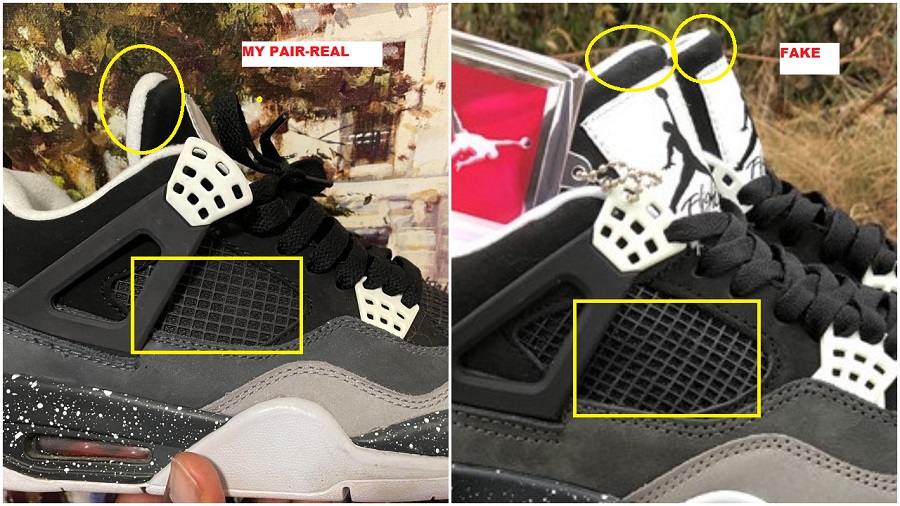 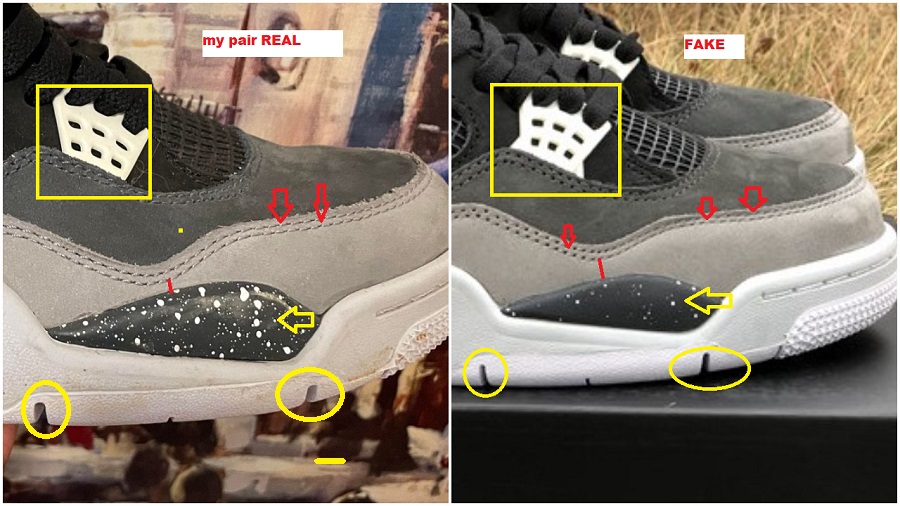 The white plastic near the toe area where the laces go has different pattern on the fake pair ( see yellow square). The threads on the stitching are very small on the fake pair ( see red arrows). The speckles on the forefoot insert are practically non existent on the replica pair  ( see yellow arrow) . The slits on the outsole are very narrow on the fakes but wider on the legitimate pair. By the way both shoes are 8.5. The spacing between the double stitching and speckled area is smaller on the authentic pair, see red line. 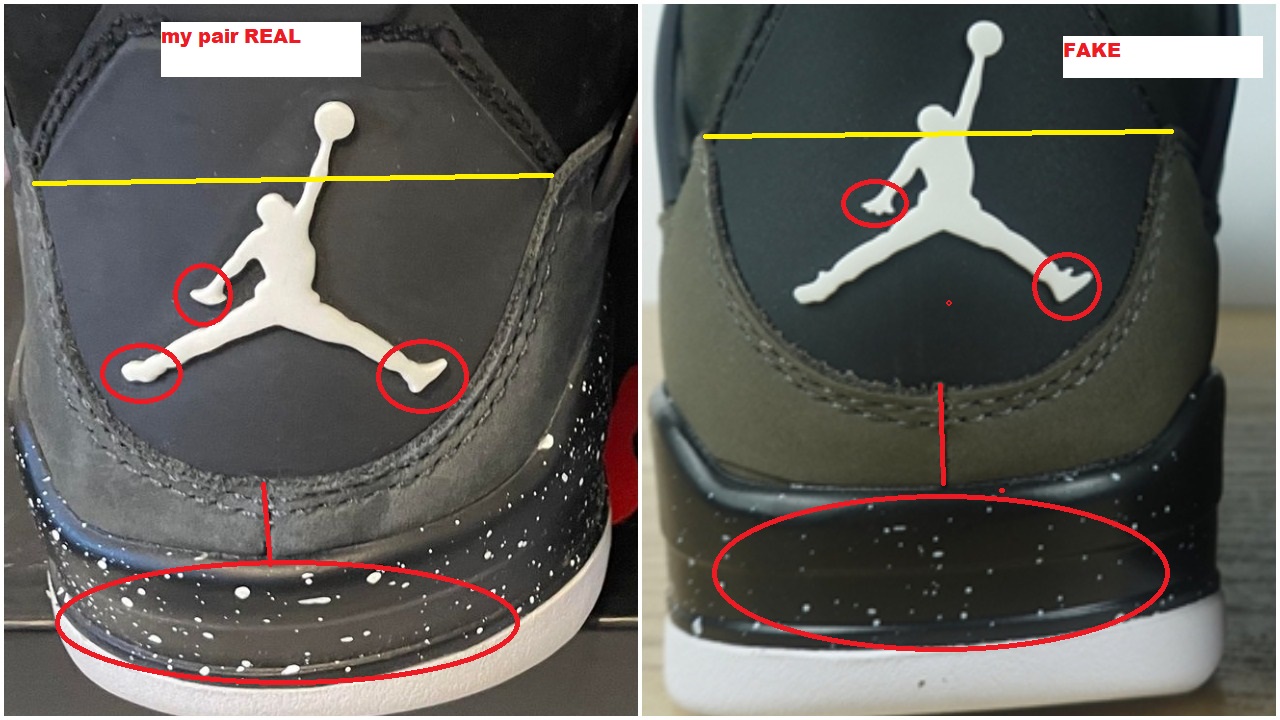 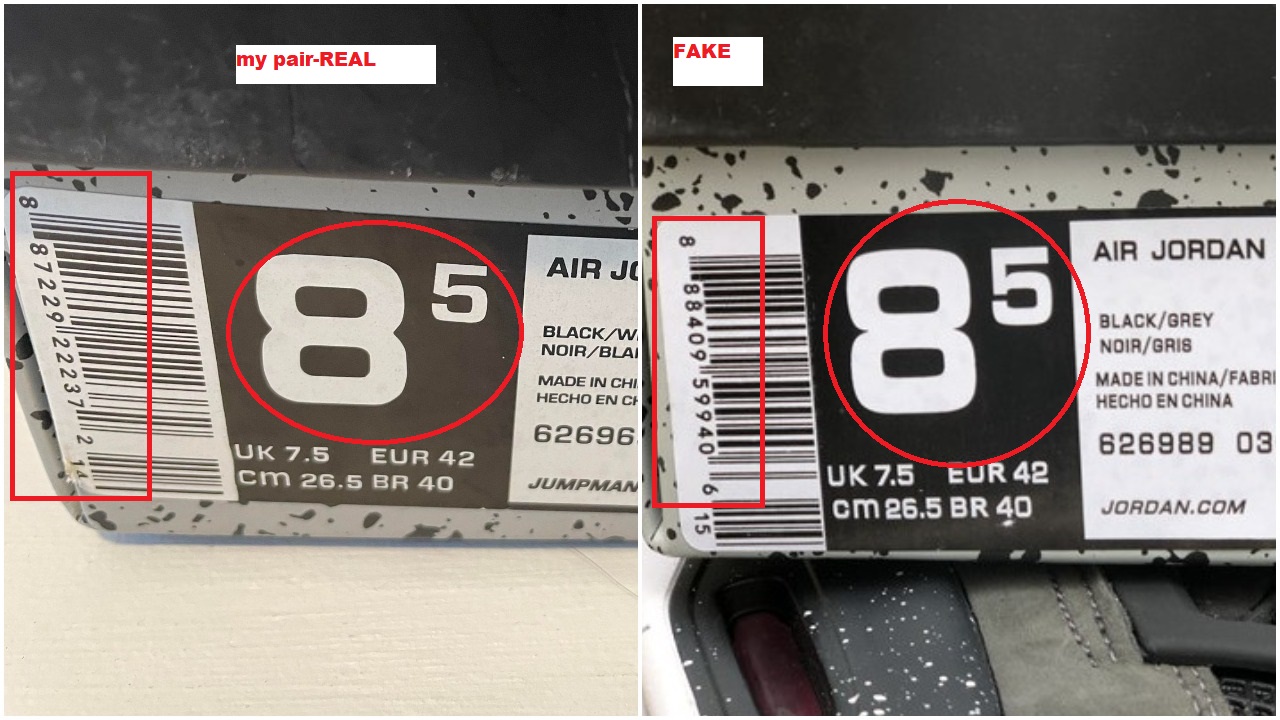 The UPC code is wrong on the fake pair and the “8.5” is much thinner on the replica as well. 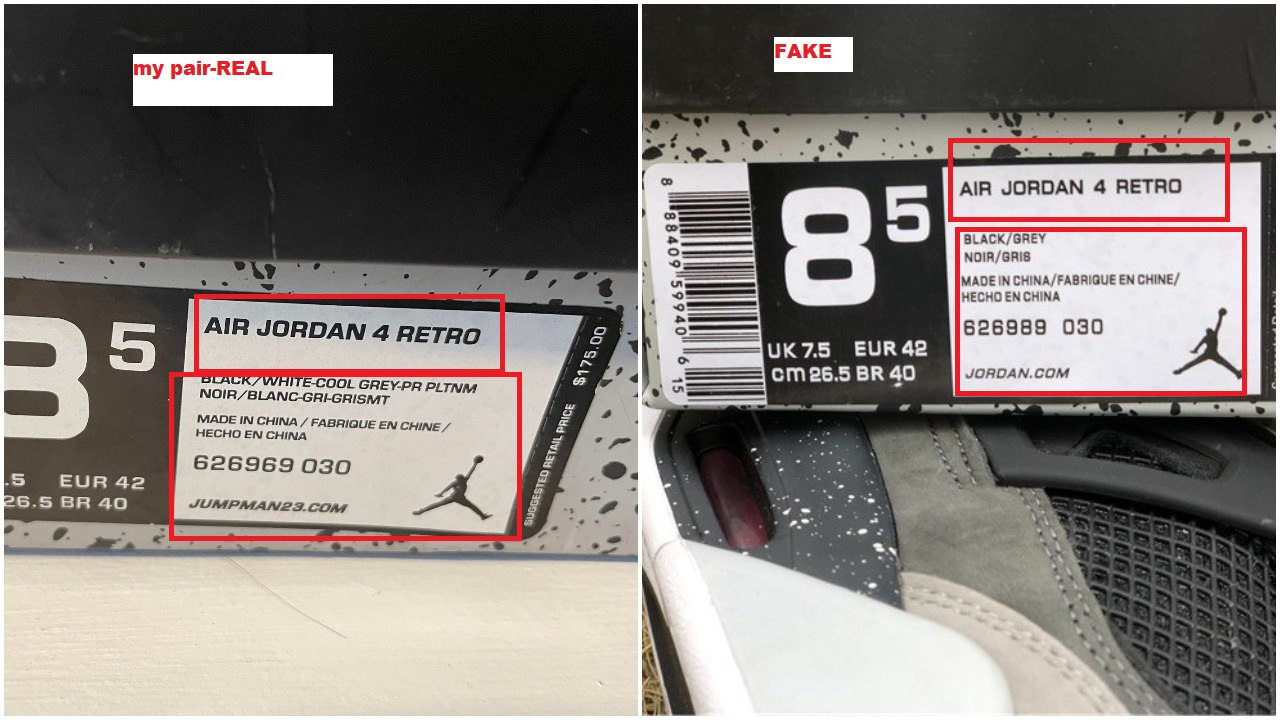 There you have it folks, I’m still astonished that eBay’s authenticators weren’t able to inspect my pair correctly. They’ve caused me grief today and I hope eBay reads this post and correct the mistake that was mde.