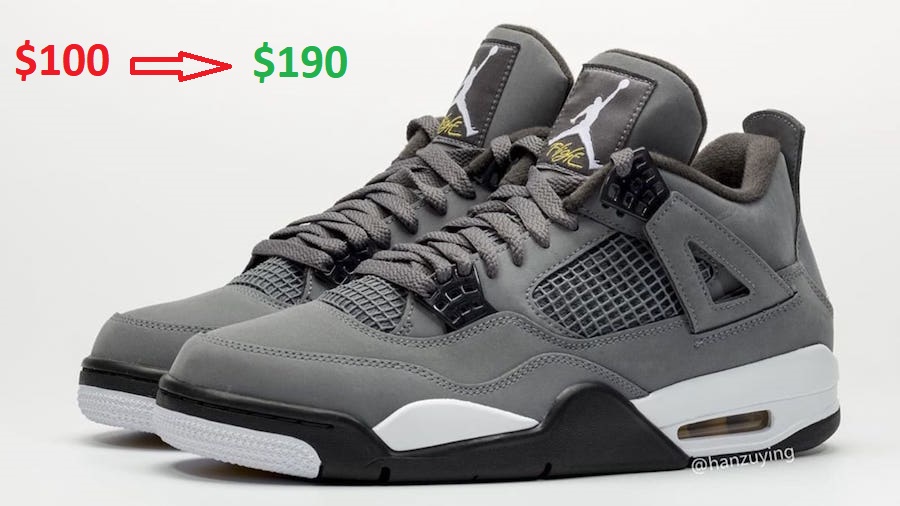 Nike hasn’t yet confirmed the actual release date of the 2019 Air Jordan 4 IV Cool Grey but according to several sneaker blogs, the shoe will officially release on August the 3rd. I shouldn’t have been surprised by its $190 suggested retail price but I couldn’t shake off the fact that when the shoe was originally introduced in 2004, it cost $100. So how did Nike go from $100 to $190? To answer that question, we need to take a look at the inflation and how it affected the value of the shoe. But according to the cpi calculator the 2019 Air Jordan 4 cool Grey ought to cost $137.98 roughly $140. Someone will probably argue with me and say that the Jordan 4 silhouette was introduced in 1989 with a $110 price tag. If you take it from this original release date , any Jordan 4 ought to now cost $231.17 ( so Nike would be exonerated under these conditions). But here is the catch- the Cool Grey Jordan 4 only cost $100 in 2004 ( $10 lower than it cost in 1989, that’s a 15 year gap) so clearly Nike’s pricing is not based on the changes in the inflation- it’s rather very arbitrary and that’s not good. It leads to all types of speculations and I’ll consider a few of them.

The most obvious reason why Nike will increase its prices like that is greed of course, the love of money, the root of all evil. Nike is the most beloved brand on the face of the universe so consumers may whine here and there about the magnified prices but comes Saturday, they’ll be sharing pictures via the social media outlets about their recent Nike pick ups. But in the last decade, a lot of GR ( General Release) sneakers have been collecting dust on retailers’s shelves so folks may object to what I said in the sentences above. And that leads me to my next point; Nike has been ferociously implementing its DTC ( Direct To Consumer ) campaign and the increase in prices of their sneakers is the brand’s strategic way of slowly disrupting and doing away with its wholesale distribution channel. I’ve already mentioned  “Nike’s wheel of fortune” in some of my previous posts but let me reiterate again. Most consumers  have understood  Nike’s system in place. There is no rush for anyone to go out and snatch these overpriced sneakers. The consumer knows that in a little less than 6 months, the shoe that is now retailing for $200 will be available for 40 to 50% below retail via Nike’s outlets. I’ve written several posts about this so refer to the links below

Basically retailers could be considered Nike’s baits; when customers walk in and out of the same retail stores for weeks, they see a myriad of Nike sneakers sitting on shelves and automatically know that the same shoes will soon be available at the outlet through the RTV system. So if you’re a Finishline or an Eblens, you’re serving Nike’s DTC purposes and may be oblivious to that fact. If you’re a DTLR, jimmy Jazz, or a Shoe City, you’re pretty much in a bad place since you may not have the luxury of the RTV. Consequently, you’re forced to mark down your items up to 80% lower than their suggested retail price just so  you can get some money for it. In the meantime Nike appeases its distribution channel/retailers by giving them scattered limited edition sneakers just to give them the illusion of a prospering business once a month.

So Can The $190 For The 2019 Air Jordan 4 IV Cool Grey Be Justified??? I’ll let you answer that question based on what you’ve just read in the paragraphs above