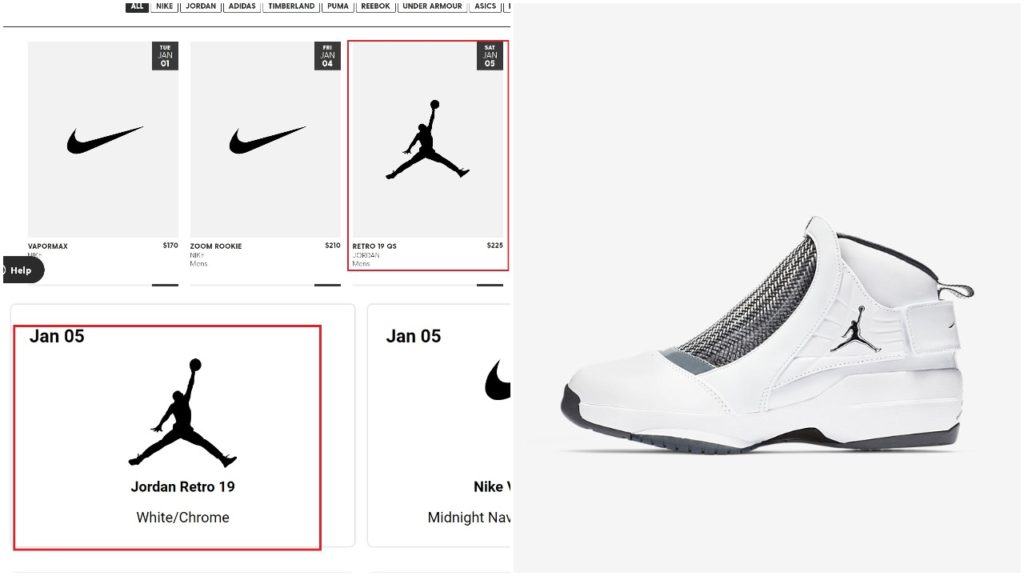 I wrote a quick post a few days ago about the Jordan 19 flint grey and  had no idea it was going to create any interest at all, see post below

Given the kind of responses I got, it was only right for me to write a projection post on the shoes. I said in my post that the only way Nike could get away with bringing the sneakers back is by limiting the number of pairs made so I wanted to take a quick count on the number of stores that were allocated an inventory. I came up with Nike ( of course), Footaction and Ruvilla/DTLR ( now that was surprise). No other minor retailer was listed beside DTLR/Ruvilla and I wonder if Nike has some type of special relationship with these two. The next step is to formulate my assumptions and I guess i’ll consider the following:

1.Footaction ( FTA) and DTLR/Ruvilla will probably receive 1/3 of the inventory each

2.Their online store will probably receive about 1/3 of the total number the physical locations receive

3. Each store will get about 18 pairs ( I’m being very conservative)

Footaction didn’t include the shoes on the launch locator map ( so I will assume that pretty much each Footaction store will be getting the shoes) and there are about 256 stores currently operating.

So far there are only 4 sales recorded on eBay and to my surprise the shoes actually have a resale value ( there is actually room for resellers to make money on them). The average resale value on eBay based on the four measly sales recorded is $309.99 but this is a dangerous way to gauge this shoe. The sample size is way too small to make a solid inference so if you’re planning on reselling this I’ll invite you to say a loud prayer prior to pulling the trigger on multiple pairs.

StockX only recorded one sale which is unheard of since the platform usually records more sales than eBay, so once again I’ll invite to be extremely careful about trying to resell these 19’s. But the interesting is StockX does have several bids which means  certain”individuals”  are actually interested in the shoes, but here is the catch: they are only willing to pay retail or less for them, see screenshot below

These are ridiculous bids if you ask me so I’ll invite you to stay away from them if you’re a reseller. As far as retailers are concerned, I don’t see the Jordan 19’s selling out instantly because they were never highly coveted and the only folks that might want them are either true collectors or individuals who never actually owned a pair of these before.

You can buy them now on eBay from our featured sellers, refer to the listings below