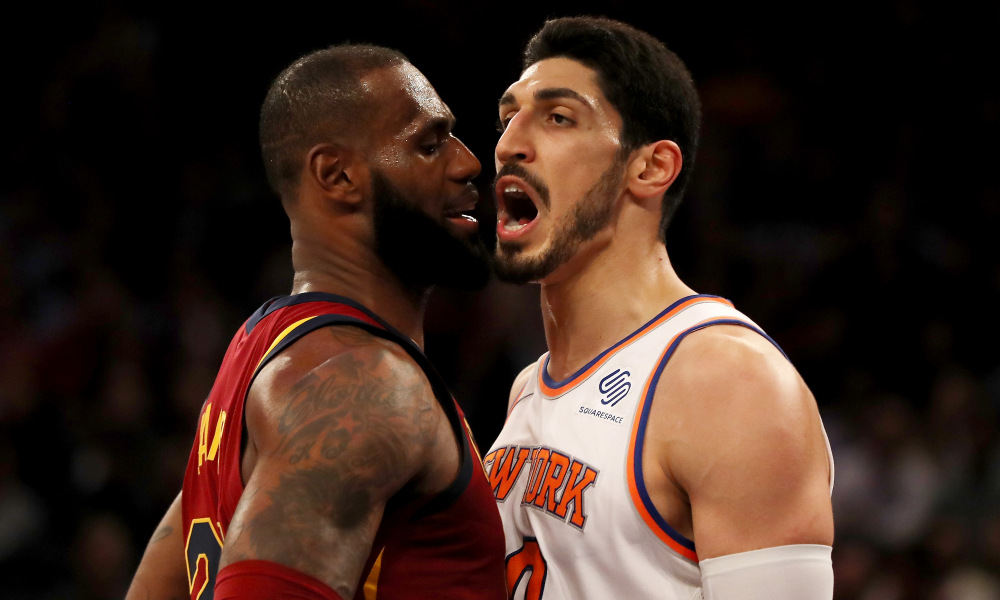 The Cavaliers came into last night game against the Knicks with a disappointing (6-7) records. Their season has been marred with ups and downs and I touched on some of their problems in the post below. The Knicks on the other hand have been thriving as of late and are actually reinventing their identity.  I’ve been really impressed with their efforts on both ends of the floor; they get a lot of buckets in transition because they are playing a fast pace game, and Porzingis ( if he can limit his turnovers ) is basically unstoppable.

Last night’s game didn’t start very well for the Cavaliers; the Knicks came into the game with a desire to shame Cleveland especially after Lebron’s criticism of rookie Ntilikina. As soon as the game started, there was an altercation between LJ and Ntilikina; what was great to see was Enes Kanter stepping in to help his teammate-that says a lot of about the team’s camaraderie. The Knicks defensive intensity and ball pressure forced  Cleveland into many turnovers; the Cavs started settling for ill advised  jump shots and they found themselves in the deficit. Lebron James’s frustration began to show as he kept throwing his hands in the air and turning over the ball as well.  Kanter was demolishing them on the boards giving New York a lot of second chance opportunities. The Cavaliers went into the half with an almost 23 points deficit. The second half started with Cleveland cutting the lead down to 8 points; then New York started hitting more triples again and got back to a 15 point lead. I switched over to the Milwaukee vs Memphis game for six minutes then came back to the NYC/ Cavs game. And I was stunned by the score, it was only a 6 point deficit. What happened? A switch went off and Cleveland started playing like a championship caliber team with Lebron James being extremely vocal on the defensive end. One thing Cleveland was missing was a spark off the bench but last night Kyle korver was all they needed to muster up enough courage to stay in the game. He started hitting 3point shots coming off screens. New York still had a chance to win the game but Porzinigs couldn’t hit his free throws and LJ sealed the victory with a clutch jumper followed up by a huge offensive rebound by D. Wade. I guess they proved that they were still worthy opponents; the great thing about last night’s victory is  the moral boost it gives the team. I think they will win their next road games with, this was a much needed victory. I just hate the fact that it had to be in MSG.

The Cleveland Cavaliers Are Now A Below .500 Team, GARBAGE DEFENSE

You can watch the highlights of the game via MLG highlights